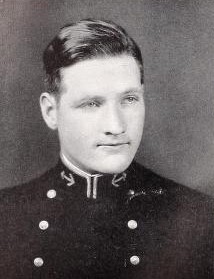 John Lee Foster was born in Perrysburg, New York on January 2, 1913, son of the late Walter Lee and Maragartte (McEvoy) Foster. He attended Hamburg High School and the Severn School, Severna Park, Maryland, prior to his appointment to the U.S. Naval Academy, Annapolis, Maryland, from his native state in 1930. Graduated and commissioned Ensign on May 31, 1934, he progressed in rank to that of Captain, to date from July 1953.

Following graduation from the Naval Academy in 1934, he joined the USS Trenton, and in June 1937 transferred to the USS J.D. Ford to serve until January 1940 as First Lieutenant and Engineering Officer. For two years he was Engineer Officer of the USS J.F. Talbot, after which he continued duty afloat, January 1942 until January 1943, as Executive Officer of the USS Bache. Detached from that destroyer, he next was assigned to the Amphibious Training Command, U.S. Atlantic Fleet, and in February 1944 assumed command of the USS Fletcher. For outstanding services while in command of that destroyer, he was awarded the Legion of Merit with Combat “V,” and the Silver Star Medal. The citation follow in part:

Legion of Merit “ For exceptionally meritorious conduct… as Commanding Officer of the USS Fletcher, in action against enemy Japanese forces in the Southwest Pacific Area, from April to November 1944. Participating in six major amphibious operations, one night naval action and one submarine hunter-killer operation, Commander Foster brought his ship and the others escorted by him through all actions without damage from the enemy and contributed materially to the success of the operations…”

Silver Star Medal: “For conspicuous gallantry and intrepidity as Commanding Officer of the USS Fletcher… during the bombardment and occupation of Mariveles, Southern Bataan and Corregidor, Philippine Islands, from February 13 to 17, 1945. When his ship was taken under fire by heavy enemy batteries on Corregidor and severely damaged during minesweeping operations, Commander Foster cooly closed in on the island and delivered a devastating counter battery fire at short range which silenced the hostile guns. Subsequently, despite his own ship’s damage, he skillfully maneuvered in mine-strewn waters in close range of enemy batteries and successfully rescued the personnel of a stricken minesweeper…”

Detached from command of the Fletcher in April 1945, he next served in the Executive Department at the Naval Academy, Annapolis, Maryland. He remained there until September 1947 when he joined the staff of Commander Destroyer Flotilla Three as Operations Officer. Between June 1949 and July 1951 he was assigned to the Underway Training Unit, San Diego, California, after which he attended a course at the Naval War College, Newport, Rhode Island.

In August 1952 he reported as Commander Mine Division Two, and a year later, joined the staff of Commander Mine Force, Atlantic Fleet; as Operations Officer. From August 1955 until June 1957 he served in the Officer of the CNO, Navy Dept., then had successive command of the USS Warrick (AKA-89) and USS Chara (AKA-58). Under orders of November 14, 1958, he later assumed command of Destroyer Squadron One, and after a year in that command became Deputy Chief of Staff for Naval Reserves, 12th Naval District, with Headquarters in San Francisco, California. On March 23, 1962 he was ordered to the Mare Island Naval Shipyard, for duty as Administration Officer.