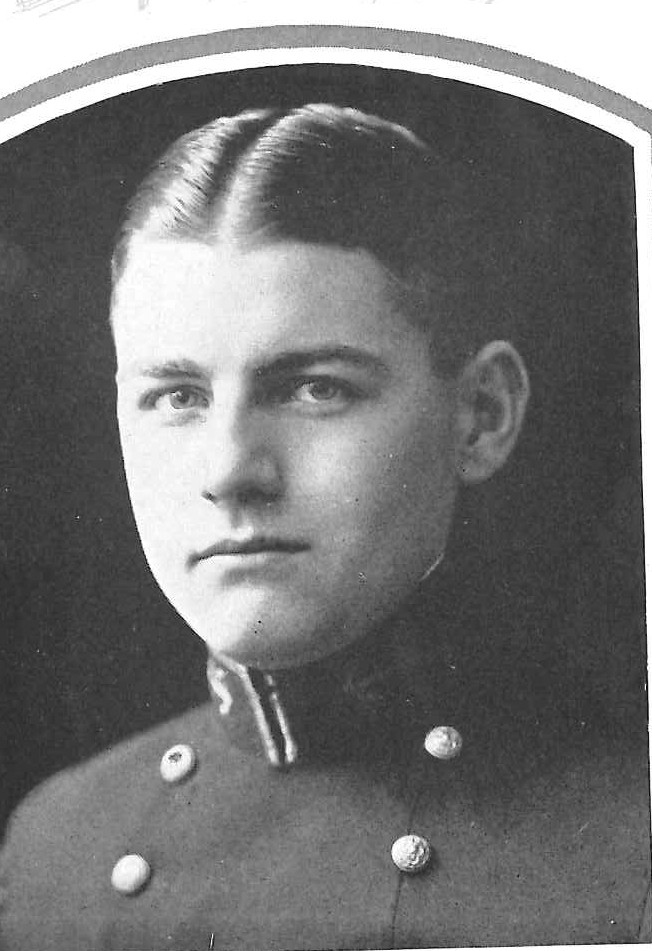 Rear Admiral Barrett was born in Mexico City, Mexico, on December 22, 1902, son of Dr. and Mrs. Robert S. Barrett of Alexandria, Virginia.  He graduated from Alexandria High School in 1919, and entered the US Naval Academy, Annapolis, Maryland, by appointment from the Eighth Congressional District of Virginia.  Graduated and commissioned Ensign June 7, 1923, he advanced in grade periodicially as follows: Lieutenant (junior grade) June, 1926; Lieutenant, June, 1932; Lieutenant Commander, July, 1939; Commander, July, 1942; Captain, July, 1943.  He was transferred to the Retired List of the Navy in the rank of Rear Admiral on April 1, 1949.

Upon leaving the Naval Academy, Rear Admiral Barrett was assigned to the Asiatic Station, and served in the USS Black Hawk, later in the destroyer NOA until December, 1925.  Transferring to the Atlantic Fleet, he served in the USS Wiliamson, destroyer, from March, 1926 to December, 1927.  For the next six months, he attended the Submarine School, New London, Connecticut before assignment to the USS S-13 in which he served from July, 1928 until June, 1930, and qualified for command of submarines.

Rear Admiral Barrett reported for duty at the Receiving Station, Washington, DC, and served as Executive Officer there for two years, after which he reported to the Commander Asiatic Fleet in August 1932 and was assigned duty in the USS Houston, later in the USS Canopus, flagship of Submarine Squadron 5.  When he returned from the Far East in December, 1934, he again had duty as Executive Officer of the Receiving Station, Washington, DC until August, 1937.  He was then ordered to join the USS Idaho, flagship of Battleship Division 3, Battle Force, US Fleet, and when detached in May, 1940, he assumed command of USS Eagle #19, District craft at Norfolk, Virginia.

In January, 1942, Rear Admiral Barrett reported for duty in connection with fitting out the USS Winooski, and when placed in commission, he became her Executive Officer, and the last year of this tour served as her Commanding Officer.  The Winooski performed duty as fleet oiler in the Atlantic and Mediterranean, carrying cargo and acting as escort oiler on trips to ports in Iceland, North Africa, and the United Kingdom.  She participated in first North African landings and landings in Sicily.  During operations off Casablanca, she was torpedoed, but completed her assigned cargo operations before returning to Gibraltar for repair.  He was awarded the Bronze Star Medal with combat distinguishing device “V”, and cited as follows:

“For heroic service as Executive Officer of the USS Winooski during the assault on and occupation of French Morocco, November 11 and 12, 1942.  When his ship was torpedoed while at anchor off Fedala, Captain (then Lieutenant Commander) Barrett and his men worked tirelessly to control the damage and keep the Winooski afloat on an even keel, thereby enabling her, the following morning, after emergency repairs had been completed, to resume fueling combat vessels at sea.  That evening, when a second torpedo attack was launched against our anchored ships, he skillfully assisted in operating the Winooski, which immediately took to sea, at speeds of twelve to fourteen knots for approximately thirty-four hours.  His courageous devotion to duty was in keeping with the highest traditions of the United States Naval Service.”

When relieved of command of the Winooski, in May, 1944, Rear Admiral Barrett reported to the Commander in Chief Pacific Fleet, and was given command, in August, 1944, of the newly commissioned LSM (landing ship) Flotilla 3.  Vessels of this unit engaged in landings at Leyte and Lingayen, Philippine Islands, Iwo Jima and Okinawa.

Returning to the United States in April, 1945, Rear Admiral Barrett served in the Fourth Naval District, Philadelphia, Pennsylvania until October, 1945, transferring at that time to the Navy Yard, Washington, DC. for duty as President of the General Court Martial of Potomac River Naval Command.  From June 6, 1947 until his retirement became affective on April 1, 1949, he served as a Member of the Naval Retiring Board, Navy Department.