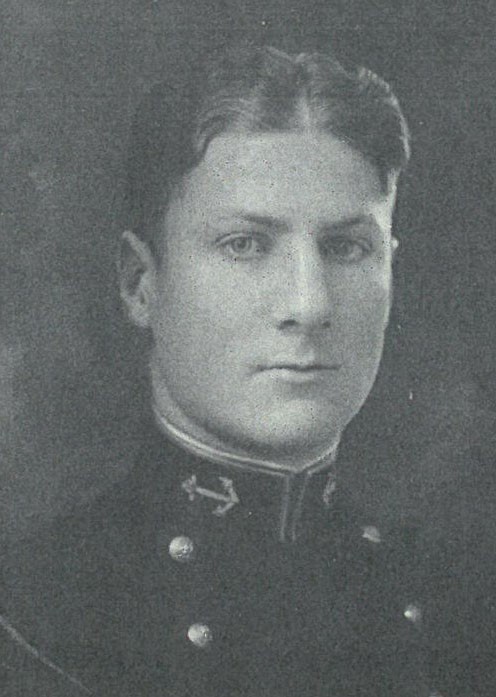 Gordon Campbell was born in Washington, D.C., on October 1, 1905, son of Brigadier General Archibald Campell, USA (Ret.), and Mrs. (Julia Defrees Sample) Campbell. He attended Punahou School in Honolulu, TH, while his father was serving as Adjutant General, Hawaiian Department, and later attended Swavely's Army and Navy Preparatory School in Washington, D.C., and Marion Institute, Marion, Alabama. Entering the U.S. Naval Academy on June 16, 1922, he was graduated and commissioned Ensign on June 3, 1926, and through subsequent promotions attained the rank of Captain, to date from August 30, 1944.

Assigned first to USS Pennsylvania, he served aboard that battleship, flagship of Battleship Division 3, Battle Fleet, from July 1926 until May 1929, when he was transferred to USS Oklahoma another unit of Division 3. A year later he was detached to USS Cole, operating with Destroyer Division 3, Scouting Fleet, and remained aboard that destroyer until December 1931. From January to June 1932 he had submarine instruction at the Submarine Base, New London, Connecticut, and for ten months thereafter was attached to USS S-17, based on Coco Solo, Canal Zone.

He returned to Annapolis in July 1933 for general line instruction at the Naval Postgraduate School, and for a year, 1934-1935, he had duty at the Naval Training Station, Norfolk, Virginia. For a year he had successive duty in the submarines S-43 and S-30, of Submarine Force, Pearl Harbor. On May 1, 1936 he assumed command of USS S-23, also attached to Submarine Force, Pearl Harbor, and detached May 19, 1938, was assigned to the Submarine School, New London, as an instructor. He joined USS Bass in June 1940, and from September of that year, when she was reactivated, until May 1942 commanded that submarine.

Upon his return to the United States, he reported to the Office of the Chief of Naval Operations, Navy Department, Washington, D.C., where he was Chief of District Affairs until August 1948. In September he joined the staff of Commander in Chief, Pacific, and U.S. Pacific Fleet, and served as Assistant Chief of Staff for Administration until the summer of 1950, when he reported to the Industrial College of the Armed Forces, Washington, D.C., as a student. Completing the course in May 1951, he served in the Bureau of Naval Personnel, Navy Department, until ordered in March 1952 to duty afloat in command of USS Columbus. In February 1953 he was detached to return to the Office of the Chief of Naval Operations.

In addition to the Legion of Merit, Captain Campbell has the Silver Life Saving Medal, awarded by the U.S. Treasury Department for rescuing a man from the USS Pennsylvania on May 3, 1928, at the Navy Yard, Puget Sound, Washington; and a Letter of Commendation from the Secretary of the Navy for meritorious service on the same occasion. He also has the American Defense Service Medal, Fleet Clasp; the Asiatic-Pacific Campaign Medal; the American Campaign Medal; and the World War II Victory Medal.