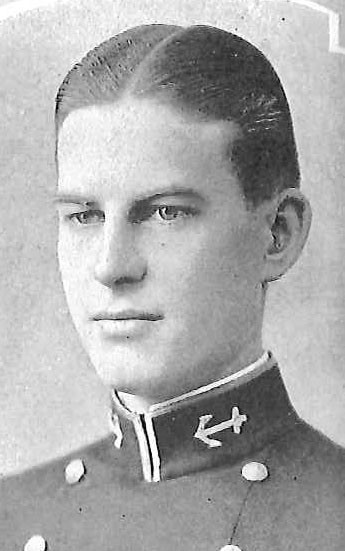 Lucius Henry Chappell was born on February 20, 1905, in Columbus, Georgia, the son of Lucius H. Chappell and the late Cynthia Kent Hart Chappell. He attended public schools in Columbus and the Riverside Military Academy, Gainesville, Georgia, before his appointment to the US Naval Academy, Annapolis, Maryland, from his native state in 1923. Graduated and commissioned Ensign on June 2, 1927, he advanced progressively to the rank of Captain, to date from March 20, 1945.

Following graduation from the Naval Academy in 1927, he was assigned to USS Idaho, a unit of Division 4, Battle Fleet. Between June 1929 and April 1931, he had consecutive duty in the destroyers Melvin, Farenholt and Hovey, also operating with the Battle Fleet. Detached from the latter, he reported in May 1931 to USS Taylor, a unit of Training Squadron, and served as Engineer Officer until June 1932. From July until December 1932, he served as Watch and Division Officer of USS Whitney, a destroyer tender of Scouting Fleet.

In January 1933 he returned to the United States for instruction in submarines at the Submarine School, New London, Connecticut. Six months later he was assigned to the submarine S-28, of Submarine Force. He next had instruction in Marine Engineering at the Postgraduate School, Annapolis, Maryland, from June 1935 until June 1937. Upon completion of the course, he reported to the Navy Yard, Portsmouth, New Hampshire, for duty in connection with fitting out  USS Snapper. He joined that submarine as Executive Officer and Navigator upon her commissioning on December 15, 1937, and served in that capacity until June 1939. Following duty as Division Engineer on the staff of Commander Submarine division 15, he assumed command on May 6, 1941 of USS Sculpin.

The Sculpin, under his command, completed eight war patrols, of which seven were designated as “successful”, during the first two years of World War II. For heroism and distinguished service as her Commanding Officer, Captain Chappell was awarded the Navy Cross and a Gold Star in lieu of the Second Navy Cross; two Letters of Commendation with Ribbon and combat “V,” and the Army Unit Citation. Citations accompanying the Navy Cross award follows in part:

Navy Cross: “For extraordinary heroism and distinguished service as Commanding Officer of the USS Sculpin, operating against enemy Japanese surface vessels, on February 4 and 6, 1942. Launching a determined daylight attack on February 4, (he) successfully torpedoed an enemy destroyer leader of the Asashoiclass on patrol off Staring Bay, sinking that vessel by two direct hits. Again, on February 6, two torpedoes, fired in rapid succession from the Sculpin, struck and sank a heavily screened Tenry-class enemy cruiser. In that subsequent depth charge counter-attack…saved his ship…despite the fact that on one occasion severity of the explosions jammed the steering and stern planes of the Sculpin, forcing her to a depth of 340 feet before control was regained…”

Gold Star in lieu of a Second Navy Cross: “For extraordinary heroism and courageous devotion to duty as Commanding Officer of the USS Sculpin… during the period February 26, 1942 to October 18, 1942…. Over a period of more than seven months, (he) pursed a course of determined aggression against enemy surface vessels which resulted in the destruction by torpedo fire of the three tankers, one enemy transport, and two store ships, totaling 53,500 tone (and) the serious damaging and probable destruction of a 4,000 ton anti-submarine vessel and the damaging of another tanker and storeship totaling 12,000 tons….”

He received the two Letters of Commendation with Combat “V,” from the Commander of Chief, Pacific Fleet, for service as Commanding Officer of the USS Sculpin, during her Seventh and Eighth War Patrols, respectively; and the Army Unit Citation for his part in the Defense of the Philippines in December 1941.

From November 1945 until May 1947, Captain Chappell served as Planning Officer in the staff of the Commander, Submarine, Pacific, after which he had command of Submarine Squadron 7. In March 1948, he was ordered to duty as Naval Aide to the Assistant Secretary of the Navy, Navy Department, Washington, DC. Detached on August 14, 1950 he had duty under instruction at the National War College, Washington, DC, until June 1951.

He assumed command, in July 1954, of USS Mt. McKinley (AGC-7), and under orders of January 17, 1952, was transferred to command of USS Quincy (CA-71). He was detached from that cruiser in December 1952, and the next month returned to the Navy Department, where he served for two years as Assistant to the Assistant Chief of Naval Operations (Undersea Warfare). On December 28, 1954 he was ordered to sea as Chief of Staff and Aide to Commander Battleships Cruiser, Atlantic Fleet.

In addition to the Navy Cross with Gold Star (in lieu of the second award), the Legion of Merit, and the Commendation Ribbon with Bronze Star and Combat “V” Captain Chappell has the Purple Heart Medal for wounds received in action; the Army Unit Commendation; the American Defense Service Medal with star; Asiatic-Pacific Campaign Medal with eight engagement stars; the World War II Victory Medal; the National Defense Service Medal; Navy Occupation Service Medal, Europe Clasp; and the Philippine Defense Ribbon with star. He also wears the Submarine Combat insignia with six stars.