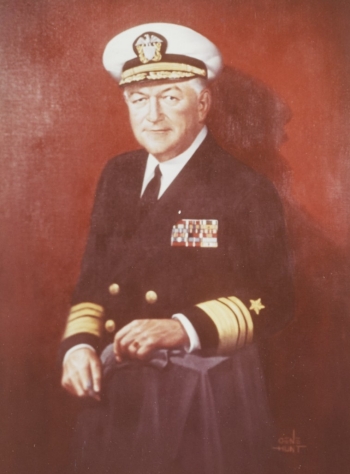 A native of Salina, Kansas, Admiral Yeager was graduated from the US Naval Academy in 1927. His early service in the Navy included sea duty in the destroyer tender Altair, the battleships Arizona and Nevada, and the destroyers Talbot and Buchanan. Prior to the outbreak of World War II, from July 1937 to June 1941, he was assigned to USS Tuscaloosa which, in December 1940, took President Roosevelt on a 5,000 mile tour of lend-lease bases acquired from Britain in Exchange for destroyers.

His war service began in the Bureau of Ordnance, Navy Department, and for outstanding achievement in the organization of a unit concerned with the repair of battle-damaged warships during the period June 1941 to February 1944, he received a Letter of Commendation, with Ribbon from the Secretary of the Navy. He next served as Executive Officer and Evaluator of the USS Nevada and for heroic service during the Invasion of the Coast of France, and later during the invasions of Iwo Jima and Okinawa Shima he was twice awarded the Bronze Star Medal with Combat “V.”

During the last three months of hostilities he was a member of the Staff of Commander US Naval Force in Europe, Headquarters in London. In 1946 he was Director of Transportation in the Bureau of Naval Personnel, and for meritorious service in that capacity received the Army Letter of Commendation, with Ribbon, from the War Department. In 1947, he served as Assistant Chief of Staff (for Administration) to the Commander in Chief, Pacific Fleet, and the next year was Aide to the Chief of Naval Operations, Navy Department.

In February 1950, he assumed command of Destroyer Squadron ONE, which operated in Pacific and Korean waters, and August 1951 joined the Staff of Commander Cruiser Division FOUR as Chief of Staff and Aide. After graduation from the National War College in June 1953, he commanded USS Des Moines for ten months. Reporting in April 1954 to the Chief of the Bureau of Naval Personnel, he served successively as Assistant Chief for Special Projects, Assistant Chief for Education and Training, and Assistant Chief of the Bureau for Personnel Control.

He was Commander Amphibious Training Command, US Atlantic Fleet from November 1956 until January 1958, after which he had command of Amphibious Group FOUR, his flag in USS Pocono. “For exceptionally meritorious conduct…as Commander Amphibious Forces, Specified Command, Middle East, during the Lebanon Crisis form July 14 to October 4, 1958…” he was awarded the Legion of Merit.

From May 1959 to June 1960 he was Anti-Submarine Warfare Readiness Executive, Officer of the Chief of Naval Operations, Navy Department, after which he assumed command of the Amphibious Force, US Pacific Fleet. In January and February 1961 he had additional duty as Commander Amphibious Training Command, Pacific Fleet, and in July 1962 again assumed that additional duty. On 30 March 1963, he reported as Commandant of the Ninth Naval District, with headquarters at Great Lakes, Illinois. He died on 11 March 1967 as a result of a fire in his headquarters at Great Lakes, Illinois. “For exceptionally meritorious service from March 30, 1963 to March 10, 1967…” he was posthumously awarded a Gold Star in lieu of the Second Legion of Merit.

Letter of Commendation with Ribbon (SecNav)

Letter of Commendation with Ribbon (Army)

Order of the British Empire

Legion of Merit: “For exceptionally meritorious conduct…as Commander Amphibious Forces, Specified Command, Middle East, during the Lebanon Operations from July 14 to October 4, 1958. A dynamic leader and skilled diplomat, Rear Admiral Yeager was eminently successful in carrying out his responsibilities during this period. Under his direction, Marine Landing Forces executed timely and efficient landings in The Beirut area of Lebanon with a minimum of advance warning. Exercising a wide knowledge of the tactics and techniques of amphibious operations, (he) skillfully directed the rapid unloading of units and materials, thereby ensuring the expeditious build-up of forces at a critical stage of the operations in Lebanon. In addition, he fostered friendly relations with Lebanese civil and military officials during a period of grat tension and potential danger. From July 16 to September 21, 1958, (he) was responsible for the control of all air operations in the amphibious area. Under his guidance and supervision, aircraft of the U. S. Navy, U. S. Air Force and United Kingdom were effectively controlled and coordinated with a minimum of interference with local commercial air traffic. Simultaneously with his other assigned tasks, he also served in the capacity of Senior Officer Present Afloat (For Administrative Purpose). When the order withdraw was given, Rear Admiral Yeager expertly directed the re-embarkation of Marine units and a large volume of supplies. Through his marked professional ability and inspiring devotion to duty, he contributed materially to the success of a vital operation…”

Gold Star in lieu of the Second Legion of Merit: “For exceptionally meritorious service from March 30, 1963 to March 10, 1967 as Commandant, Ninth Naval District. Responsible primarily for providing qualified and well-trained officers and enlisted personnel to the Fleet, Rear Admiral Yeager, through his personal and professional interest and inspiring guidance, contributed directly to the continued improvement in recruiting and to the progressive increase in the training efficiency of the many and varied schools throughout the Ninth Naval District.   Travelling extensively throughout the thirteen Midwest states to tell the Navy story to many thousands of people, he won the respect and esteem of all with whom he came in contact and substantially enhanced the Navy image throughout the District. His untiring efforts produced a marked gain in the number and caliber of recruits in both enlisted and officer candidate programs. Recognizing the need to raise the average level of academic and practical learning and to stimulate a high degree of motivation among the recruits Rear Admiral Yeager vigorously sought to improve training programs and teaching methods and to provide better housing and recreation facilities…”

Bronze Star Medal: “For heroic service…during the Invasion of the Coast of France from June 6 to 25, 1944. With his ship operating under fire, in mine-infested waters during the initial assault and bombardment operations, (he) contributed materially to the securing of the beachhead and to the successful bombardment of Cherbourg, thereby aiding in the accomplishment of the mission to his ship …”

Gold Star in lieu of Second Bronze Star Medal: “For meritorious service as Executive Officer and Evaluator of the Combat Information Center of the USS NEVADA, during operations against enemy Japanese forces in the bombardment and invasion of Iwo Jima and Okinawa Shima from February to April 1945…(He) was in large measure responsible for the exceptionally high standard of training, morale and combat readiness of the ship’s personnel and contributed materially to the successful accomplishment of all missions assigned his vessel…”