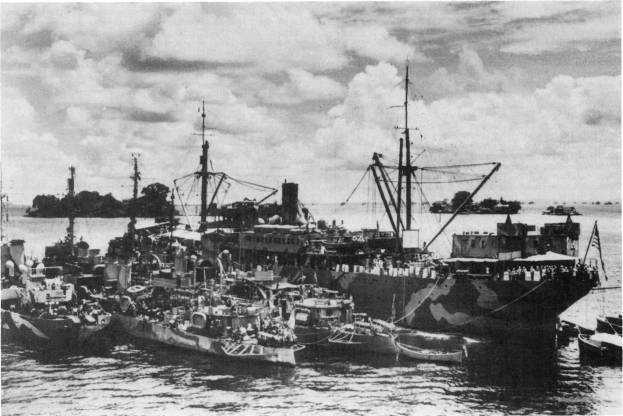 A first magnitude star in the constellation Aquila, in the northern Milky Way.

The first Altair (AD-11) was laid down as the steel-hulled, single-screw freighter Edisto, under a United States Shipping Board (USSB) contract on 18 December 1918 at Seattle, Wash., by the Skinner and Eddy Corp. Launched on 10 May 1919, Edisto came under naval scrutiny in the 13th Naval District, being given the identification number (Id. No.) 4156 and initially earmarked for potential service as a collier. After a brief period of operation by the USSB, Edisto was transferred to the Navy by executive order on 29 October 1921 and renamed Altair on 2 November 1921. Classified as a destroyer tender, AD-11, the ship was delivered to the Navy on 5 December 1921 and commissioned at the New York Navy Yard the following day, 6 December 1921, Comdr. James H. Comfort in command.

Converted to a destroyer tender at the New York Navy Yard, and equipped with surplus and salvaged machine tools and shop equipment selected from dismantled Navy and Army war plants in the demobilization after World War I, Altair underwent her metamorphosis in nine months and then fitted out at her conversion yard into late November, 1922. She then proceeded to the west coast of the United States via Newport, R.I.; Hampton Roads and the Panama Canal Zone, reaching San Diego, on 17 December 1922. She was assigned to Destroyer Squadron 12, Destroyer Squadrons, Battle Fleet, a unit of 19 destroyers (one "leader" and three six-ship divisions) operating at that time with 84% complements as part of the "rotating reserve."

From 1922 to 1939, Altair followed her charges and provided support services wherever required-jobs which varied from simple repairs to reblading turbines. During this time, to have her own capabilities maintained, she underwent yearly upkeep at the Mare Island Navy Yard. As an example of her following the fleet to ply her vital trade, in 1925, Altair supported her assigned destroyers in Hawaiian waters during joint Army-Navy maneuvers designed to test the defenses of that Pacific base, and that summer and autumn, when the United States Fleet carried out its Australasian cruise, Altair visited Tutuila, Samoa; Port Phillips, Australia and Littleton, New Zealand, during the course of her voyage.

In 1926, the Nicaraguan civil war prompted the dispatch of Sailors and Marines from ships of the Special Service Squadron and, later, from other ships in the fleet, to protect the lives of Americans and their property from the clashes of warring factions. However, "as the danger points moved inland," the Secretary of the Navy's report for 1928 states, "it became advisable to use Marines for this duty." Accordingly, a Marine expeditionary force, some 3,000-men strong, was dispatched to Nicaragua early in 1927. Altair participated in this troop lift, when she and the destroyer tender Melville (AD-2) transported Marine Observation Squadron 1 and a rifle company from San Diego to Corinto, a port on the west coast of Nicaragua, reaching their destination 16 February 1927. The destroyer tender then resumed her operations providing services to the destroyers of Squadron 12, accompanying them to Narragansett Bay for tactical exercises before ultimately returning once more to San Diego.

When World War II broke out in Europe in the autumn of 1939, Altair was tending Destroyer Squadrons 4 and 6, of Destroyer Flotilla 2, Battle Force, still based on San Diego. In March 1940, however, to service the destroyers of the Hawaiian Detachment sent to Pearl Harbor in December of the previous year, Altair was shifted to "Pearl." En route to her new duty station she served as plane guard for Navy Consolidated PBY "Catalina" flying boats being ferried to Oahu, arriving at Pearl Harbor on 16 April 1940. She tended destroyers there through the end of the year 1940 and into 1941 as the fleet based permanently on Pearl Harbor following the conclusion of Fleet Problem XXI.

Overhauled at Mare Island Navy Yard from 6 April to 6 June 1941, Altair returned to Pearl Harbor on 26 June. For the next three months the destroyer tender discharged her duty there until she departed Hawaiian waters on 30 September for the west coast. Pausing briefly at San Diego from 12 to 18 October, the ship pushed south, transited the Panama Canal on 2-3 November 1941, and arrived at her new duty station, Hamilton, Bermuda, on 11 November 1941, to provide support for destroyers operating on patrols in the North Atlantic.

After the Japanese surprise attack upon the Pacific Fleet at Pearl Harbor brought the United States into World War II, Aliair maintained a routine of carrying out upkeep and repair work on Atlantic Fleet destroyers at Bermuda that continued into the summer of 1942. Underway for San Juan, Puerto Rico, on 3 July 1942, escorted by the destroyers Bernadou (DD-153) and Cole (DD-155), Altair arrived at her destination on the 6th, detaching the two destroyers and picking up another, Hilary P. Jones (DD-428), which escorted the tender of Trinidad, where she arrived on 11 July. Except for brief periods at Aruba and Curaqao, in the Dutch West Indies, in early September, Altair tended destroyers at Trinidad through mid-July 1943.

Following an availability at the Norfolk Navy Yard, Altair reported to Commander, Operational Training Command, Atlantic Fleet, on 21 August 1943 and soon resumed active tender operations at Bermuda, this time in support of the destroyer and destroyer escort shakedown group (Task Group 23.1) until shifted to Guantanamo Bay, Cuba, where she arrived on 11 March 1945. Providing tender services at "Gitmo" until 3 May 1945, Altair then proceeded back to the Norfolk Navy Yard to be prepared for service in the Pacific theater. While the ship proceeded on her voyage, Germany surrendered unconditionally and the European war came to an end.

Prepared for "distant service", Altair emerged from the Norfolk Navy Yard on 26 July and set course for the Pacific. Arriving in the Panama Canal Zone on 4 August, the ship remained there for the next eleven days while World War II in the Pacific, hastened to a conclusion by the explosion of two atomic bombs over Hiroshima and Nagasaki, came to an end. Altair sailed for Pearl Harbor on 15 August 1945.

Altair reached Pearl Harbor on 6 September 1945 and provided tender services to small ships and craft into the early spring of 1946. She departed Hawaiian waters for the last time on 27 April 1946 and reached San Francisco on 8 May, slated for disposal within the 12th Naval District. Decommissioned at the Mare Island Naval Shipyard (formerly the Mare Island Navy Yard) on 21 June 1946, Altair was transferred to the Maritime Commission on 8 July 1946 and her name struck from the Naval Vessel Register on 21 July 1946. Laid up in the National Defense Reserve Fleet's Suisun Bay, Calif., berthing area, the ship remained there until sold on 9 March 1948 to the Basalt Rock Co., who subsequently removed her from government custody and scrapped her.