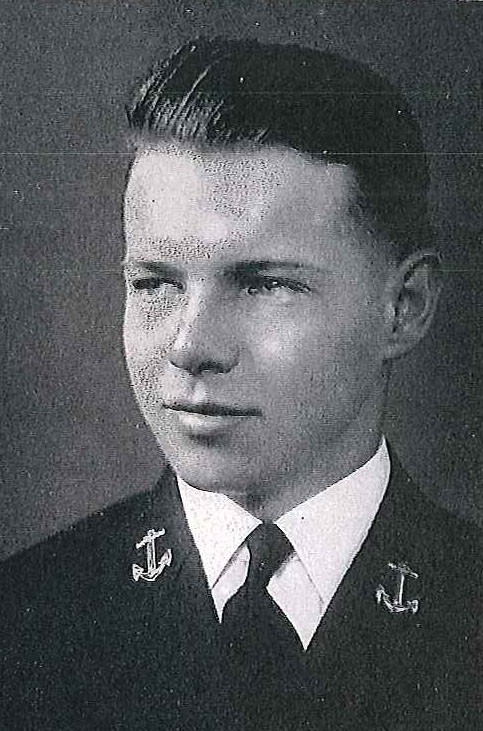 William Smoot Antle, Jr., was born in Petersburg, Illinois, on February 5, 1918, son of William S. and Catherine (Lourie) Antle.  He attended Petersburg Harris High School, in Petersburg, and Randles Preparatory School, Washington, DC, prior to entering the US Naval Academy, Annapolis, Maryland, on appointment from his native state in 1936. Graduated and commissioned Ensign on June 6, 1940, he subsequently advanced in rank to that of Captain, to date from July 1, 1959.

Following graduation from the Naval Academy in 1940, he joined USS Wichita in time to participate in her “Good Will” cruise to South America.  He was serving in that cruiser when the United States entered World War II, December 8, 1941 and subsequently took part in neutrality patrol; escort of PQ-17 to Murmanski; in the sinking of a French cruiser and destroyer at Casablanca; operations to keep the supply routes to Guadalcanal open and in the invasion of Attu and Kiska in the Aleutians.  Detached from the Wichita in November 1943, he next had submarine training at the Submarine School, New London, Connecticut.

In April 1944 he joined USS Gabilan, in which he made five war patrols in Japanese waters.  Four of those were successful, sinking a cruiser, a minesweeper, several merchant ships and rescuing seventeen aviators.  He was awarded the Silver Star Medal and the Bronze Star Medal with Combat “V.”  The citation follow in part:

Silver Star Medal:  “For conspicuous gallantry and intrepidity as Assistant Approach Officer of USS Gabilan during the Fifth War Patrol of that vessel in enemy Japanese-controlled waters, from March 20 to May 23, 1945.  Expertly handling attack problems throughout this patrol, Lieutenant Commander Antle rendered invaluable assistance to his commanding officer in conducting torpedo and gun attacks to sink over 6,000 tons of enemy shipping and to damage over 5,000 tons despite severe countermeasures…”

Bronze Star Medal:  “For heroic service as Executive Officer and Navigator of USS Gabilan during the Sixth War Patrol of that vessel off the Southern Coast of Honshu from June 20 to August 17, 1945.  Displaying outstanding skill and efficiency in performance of his duties, Lieutenant Commander Antle rendered invaluable assistance to his commanding officer in conducting a series of very efficient rescue missions during which seventeen downed aviators were recovered, on one occasion penetrating the approaches to Tokyo Bay to effect a daring rescue…”

In October 1945 he joined USS Atule and as Executive Officer of that submarine made the trip to Kane Basin in northern Greenland, which, at that time, was the furtherest north any submarine had penetrated. Detached from that submarine in October 1946, he was ordered to the Fifth Naval District, Norfolk, Virginia, where he established the organized reserve program for submarine personnel and served as Submarine Reserve Coordinator.  He remained there until January 1949 and after several months at the Prospective Commanding Officers School, Submarine Base, New London, Connecticut, reported in March 1949 as Commanding Officer of the German U-boat U-2513.  Under his command, the U-2513 fired German torpedoes for the Operational Development Force to evaluate the capability of that submarine.

He served as Assistant Operations Officer on the Staff of Commander Submarine Squadron FOUR, during July and August 1949, after which he commanded USS Manta.  Detached from that submarine in August 1951, he next headed the Submarine Warfare Readiness Section in the Office of the Chief of Naval Operations, Navy Department, Washington, DC.  In May 1954, he joined the Staff of Commander Submarine Force, US Atlantic Fleet as Ordnance Officer and in June 1956 assumed command of Submarine Division SIXTY-TWO.  He returned to the Submarine School, New London, in August 1957, and served on the Administrative Staff there until August 1959, after which he had duty as Chief of the Naval Section, Joint US Military Aid Group, Greece, with headquarters in Athens.

In August 1962 he assumed command of USS Sperry (AS-12), which tended conventional and nuclear attack submarines, and in June 1963 was detached for duty on the Staff of the Deputy Commander Submarine Force, US Atlantic Fleet.  He was Assistant Chief of Staff for Logistics until July 1964 when he became Chief of Staff.  In August 1965 he reported as Commander Submarine Squadron SIXTEEN, and in September 1966 was assigned to the Office of the Secretary of Defense, Washington, DC.