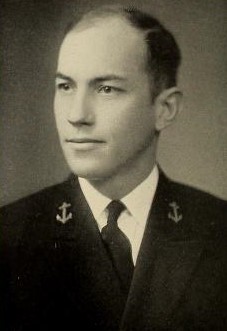 Marshall Harlan Austin was born in Eldorado, Oklahoma, on June 14, 1911, son of William C. and Lillie E. (Diddy) Austin. He attended Altus, Oklahoma, High School, and Hall’s Preparatory School in Columbus, Missouri, before his appointment to the US Naval Academy, Annapolis, Maryland, in 1931. While a Midshipman he was a member of the Naval Academy Crew. Graduated and commissioned Ensign on June 6, 1935, he subsequently advanced to the rank of Captain, with date of rank of July 1, 1954.

Upon graduation from the Naval Academy, he was assigned to the USS Milwaukee, in which he served as a junior officer in engineering, communications and gunnery, during the period July 1935 to December 1937. From January to June 1938 he was assigned to the USS S-30, a submarine based at New London, Connecticut, and had additional duty as Assistant Crew Coach at the Naval Academy. He had instruction in submarine at the Submarine School New London, and when detached in December 1938 assisted in fitting out the USS Spearfish. He joined that submarine at her commissioning in July 1939 and served as her Engineer Officer during the early period of World War II.

Before his detachment in February 1943, the Spearfish evacuated twelve Army and Navy nurses and fourteen officers from Corregidor the night before that stronghold fell, May 6, 1942. Captain Austin was awarded the Bronze Star Medal with Combat “V,” for “heroic service as Diving Officer of the USS Spearfish during the Third War Patrol of that vessel in the Southwest Pacific Area from March 27 to May 20, 1942…” The citation states that he “rendered invaluable assistance to his commanding officer in conducting successful attacks with resulted in the sinking of two enemy ships totaling 10,000 tons and in making a daring rescue of numerous military personnel from an island fortress under constant enemy attack…”

He was Executive Officer and Navigator of the USS Cod from March 1943 until January 1944, and the next month was assigned to Submarine Division 162 as a Prospective Commanding Officer. In March he assumed command of the USS Redfin, which rescued survivor of USS Flier from the Island of Palawan when the Flier hit a mine, and made four War Patrols in the Southwest Pacific Area on Redfin and a total of twelve patrols during the war. He was awarded the Navy Cross, the Silver Star Medal, and Gold Stars in lieu of the Second and Third Bronze Star Medals, with combat “V” and citations to follow:

Navy Cross:  “For extraordinary heroism as Commanding Officer of the USS Redfin, during a War Patrol, during a War Patrol  of that vessel in enemy Japanese-controlled waters, from March 19 to May 2,1944… Lieutenant Commander Austin launched a series of bold, audacious attacks in the face of heavy and persistent hostile countermeasures, to sink one 1500-ton destroyers and four merchant ships totaling over 28,000 tons. Fighting his ships with courage and determination against the devastating follow-up fire of the Japanese, he expertly evaded the deadly missiles of the enemy and succeeded in bringing his vessel safe to port without serious injury to his gallant crew…”

Silver Star Medal: “For conspicuous gallantry and intrepidity as Commanding Officer f the USS Redfin during the Third War Patrol of that vessel in enemy Japanese-controlled waters from May 26 to July 14, 1944. Conducting vitally important reconnaissance, (he) successfully accomplished a special mission and, in addition, maneuvered his vessel to strike against the enemy, sinking a large tanker and transport totaling 16,100 tons and damaging another transport of 9,300 tons… successfully escaped enemy countermeasures to return his ships safe to part….”

Gold Star in lieu of Second Bronze Star Medal; “For heroic achievement as Commanding Officer of the USS Redfin during the Fourth War Patrol of that vessel in enemy Japanese-controlled waters from August 6 to October 4, 1944… (He) conducted successful gun and torpedo attacks which resulted in the sinking and damaging of over 10,000 tons of enemy shipping. In addition, he expeditiously completed two extremely hazardous an important special missions and, evading severe enemy countermeasure, brought his ship safe to port…”

Gold Star in lieu of Third Bronze Star Medal: “For meritorious service… during the Fifth War Patrol of ( the USS Redfin) in enemy-controlled waters, from October 26, 1944 to January 7, 1945… (He) launched aggressive torpedoes attacks to sink a 10,000-ton tanker and damage a 9,000-ton vessel, skillfully avoiding subsequent hostile depth-charging and gunfire….”

From February 1945 throughout the remaining war period and until March 1946 he served on the staff of Commander Submarines, Pacific Fleet Administration, Mare Island, and in April 1946 left that billet to command the USS Tusk for a year. He next had a tour of duty as Operations Officer on the Staff of Commander US Naval Base, Portsmouth, New Hampshire, after which he again had submarine duty, first as Operations Officer n the staff of Commander Submarine Squadron 5, and from February 1951 to January 1952 as Commanding Submarine Division 32.

During the period from February 1952 until July 1955 he was assigned to the Submarine School, New London, as a Prospective Commanding Officer Instructor, and from July 1953 as officer in Charge of the School. In August of 1955 h assumed command of the USS Howard W. Gilmore (AS-16), and under orders of March 20, 1956, he was transferred to command of Submarine Squadron 12. On August 5, 1957, he was ordered to the office of the Chief of Naval Operations, Navy Department, Washington, DC, where he currently serves as Assistant Director, Progress Analysis Group.