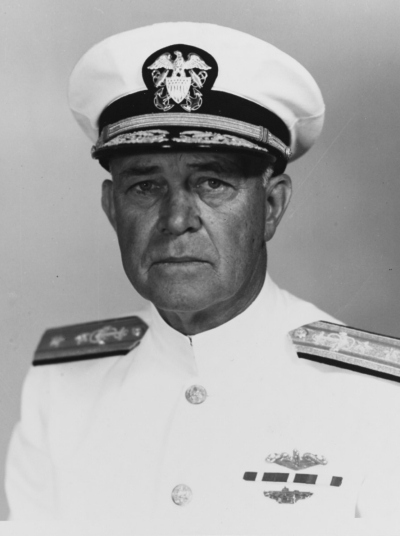 Charles Bowers Momsen was born in Flushing, Long Island, New York, on 21 June 1896, son of Hart and Susie (Bowers) Momsen. Nicknamed "The Swede," Momsen was in reality of Danish descent. He attended public schools in Washington, DC and St. Paul, Minnesota, before his appointment in 1916 to the US Naval Academy, Annapolis, Maryland, from the Fourth District of Minnesota. As a midshipman he played football and baseball, and during the summer of 1918, served in USS Kansas (Battleship No.21) on Atlantic escort duty during World War I. He was graduated and commissioned ensign on 7 June 1919.

He remained in Annapolis under instruction until September, when he joined USS Oklahoma (Battleship No.37), operating with Division Seven, Battleship Squadron Three, Atlantic Fleet. Detached in June 1921, he reported to the Newport News (Virginia) Shipbuilding Company where USS Maryland (Battleship No.46) was fitting out. He served aboard that battleship from her commissioning on 21 July 1921 until September 1921. Following submarine training at the Naval Submarine Base, New London, Connecticut, he reported in January 1922 as Executive Officer of the submarine USS O-13 (SS-74), based at Coco Solo in the Panama Canal Zone. From June 1923 to June 1927 he successfully commanded the submarines 0-15 (SS-76), R-24 (SS-101) and S-1 (SS-105).

He then served a tour of duty at the Design Division of the Bureau of Construction and Repair, Navy Department, Washington, DC. Detached in June 1929, he was ordered to the Submarine Safety Test Unit, aboard USS S-4 (SS-109), a floating laboratory. During this period, which ended in September 1932, he was engaged in the design of a submarine escape breathing apparatus, later known as the "Momsen Lung." For this development, he was awarded the Distinguished Service Medal, with citation which states in part:

"During the early stages of its (the Lung's) design and development (he)...courageously, repeatedly and voluntarily risked his life in conducting experiments of a nature such that there was little or no information available as to their probable results. In the later tests of the device, when escapes were made from USS S-4 submerged to depths as much as 206 feet, he was not only the first person to venture the escape but also the leading and guiding spirit in all subsequent ones..."

Between September 1932 and March 1934 he was assigned to the Submarine Base, Pearl Harbor, and for ten months thereafter he had sea duty as Engineering Officer of USS Oglala (CM-4). Detached from that minelayer in January 1935, he reported the following month as Executive Officer of submarine tender USS Canopus (AS-9), a unit of Submarine Squadron Five. In February 1936 he was transferred to the light cruiser USS Augusta (CL-31) for services first as Engineer Officer, and later, as First Lieutenant and Damage Control Officer.

In August 1937 he reported as Officer in Charge of Experimental Diving at the Navy Yard, Washington, D.C. While there, he helped develop a new set of decompression tables and supported proposals for the use of a helium and oxygen air mixture in deep diving operations. He also assisted in the successful salvage and rescue of crew members from the submarine Squalus after she sank in approximately two hundred and forty feet of water off the Isle of Shoals in May 1939. For especially creditable and outstanding performance of duty during this operation, he was commended by the President of the United States and the Secretary of the Navy.

After assuming command of the cargo ship USS Sirius (AK-15) in September 1939 he remained there until October 1941 when he was detached for duty in the Fourteenth Naval District, Pearl Harbor, T. H. Momsen remained there in connection with war operations after the Japanese attack on 7 December 1941, and in July 1942 was designated as Assistant Chief of Staff and War Plans Officer, to the Commander Hawaiian Sea Frontier. In February 1943 he reported as Commander Submarine Squadron Two, and in November of the same year transferred in like capacity, to Submarine Squadron Four. For his special contributions to submarine warfare from February 1943 to June 1944, he was awarded the Navy Cross, the Legion of Merit, and a Gold Star in lieu of a second Legion of Merit, with Combat "V." The citations follow, in part:

Navy Cross: "For extraordinary heroism as Commander of a Coordinated Attack Group of Submarines operating in the enemy Japanese-controlled waters of the East China Sea. A master of submarine warfare, (he) evolved a doctrine of attack whereby submarines could be organized into an attack group capable of operating deep in enemy-controlled waters while maintaining full striking power...The submarines under his command sank five Japanese ships totaling over 38,000 tons and damaged eight ships totaling 63,000 tons..."

Legion of Merit: "For exceptionally meritorious conduct...as Commander Submarine Squadron) Two...With unfailing patience and a careful analysis of the faulty performance of submarine torpedo exploders which resulted in an alarming number of duds occurring in attacks by submarines of this force, (he) personally supervised an investigation to determine the weaknesses of the exploder then in use and, correlating his own ideas with those submitted by others, succeeded in developing a vastly improved exploder which insured efficiency of our submarines in subsequent actions. During one experimental phase of the program when a war shot torpedo fired into a cliff failed to explode, he unhesitatingly, and at great risk of life, entered the water and assisted in the recovery of this live torpedo for further examination..."

Gold Star in lieu of Second Legion of Merit: "For...outstanding services...as Commander Submarine Squadron Two from February to November 1943, and as Commander Submarine Squadron Four from November 1943 to May 1944, with additional duty as Chief of Staff, Commander Training Command, Submarine Forces, United States Pacific Fleet, from November 1943 to April 1944...(He) was responsible in a large way for the success of Squadron Two and Four in completing many war patrols in enemy waters and in sinking many thousands of tons of hostile shipping..."

Between June and December 1944, he had duty in the Office of the Chief of Naval Operations, Navy Department, and when detached he assumed command of USS South Dakota (BB-57). Under his command, that battleship took part in operations against Japan, attacking enemy installations in the area of Tokyo. "For exceptionally meritorious conduct...as Commanding Officer of USS South Dakota...from December 1944 to August 1945..." he was awarded a Gold Star in lieu of the Third Legion of Merit, with Combat "V." The citation states that he "contributed in a large measure to the infliction of serious damage upon enemy forces and shore installations, and effectively directed his ship in numerous air actions and several bombardments of enemy shore defenses including the first Naval bombardment of the Japanese main island of Honshu."

He also received a letter of commendation from the Commander Fifth Fleet, with authorization to wear the Commendation Ribbon and Combat "V," for outstanding service while in command of USS South Dakota during the support of the assault operations on Okinawa from 14 March to 14 May 1945.

When relieved of the command of South Dakota in July 1945, he was assigned to Headquarters, Commander in Chief, United States Fleet, at the Navy Department, Washington, DC, to prepare for the invasion of Japan, scheduled for April 1946. After the Japanese surrender on 2 September 1945, he was ordered to duty as Administrator, US Naval Shipping Control Authority for Japanese Merchant Marine, concerned with repatriation of Japanese civilian and military personnel. He was awarded the Distinguished Service Medal by the War Department, and cited as follows:

"(He) performed exceptionally meritorious and distinguished service in Japan from November 1945 to October 1946. He directed the shipping of the Japanese Civilian Merchant Marine in repatriating nearly six million people. He provided for the proficient training of Japanese crews, and resourcefully integrated United States and Japanese shipping into an effective organization which insured the safe and expeditious return of millions of displaced persons to their homes..."

On 15 October 1946, he became Commandant of the Naval Operating Base, Guam, Marianas Islands, continuing to serve as such until January 1947, when he joined the staff of Commander, Marianas Islands as Chief of Staff and Aide. After his return to the United States, he was a member of the General Board, Navy Department, from June 1947 to May 1948, and for three years thereafter served as Assistant Chief of Naval Operations for Undersea Warfare, Navy Department.

On 21 May 1951 he reported as Commander Submarine Force, Pacific Fleet, in which assignment he served for two years. On 2 June 1953 he was sent to Boston, Massachusetts to be Commandant of the First Naval District, with additional duty as Commander Naval Base, Boston, and Commander Naval Base, Portsmouth, New Hampshire. In April 1945 he was designated Commander Joint Task Force Seven, and continued to serve as such until relieved of all active duty pending his retirement, effective 1 September 1955.

Vice Admiral Momsen was married on 18 December 1953, to Mrs. Anne I. Schmidt of St. Petersburg, Florida. He had two children by a former marriage.

On 1 September 1955 he was transferred to the Retired List of the US Navy, and was advanced to the rank of Vice Admiral on the basis of combat awards.

After retirement, he served as a consultant to several corporations including General Dynamics, Raytheon, and US Rubber.

Charles B. Momsen, aged 70, died of cancer on Thursday, 25 May 1967, at Bay Pine Veterans Hospital in St. Petersburg, Florida.