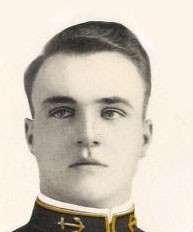 Calvin Hayes Cobb was born in Kittery, York County, Maine, on November 21, 1889. He was appointed to the United States Naval Academy, Annapolis, Maryland, on June 12, 1907 from his native state. While a midshipman he played on the Academy football team, holding punting and place-kicking records in 1908; was a member of the Academy Rifle Team, qualifying as Sharpshooter; and was secretary of the Midshipman’s Athletic Association in 1908. Graduated in July, 1911, he served as sea as a Passed Midshipman as then required by law, and was commissioned Ensign on March 7, 1912. He subsequently attained the rank of Rear Admiral to date from May 10, 1942, and was transferred to the Retired List of the Navy in the rank of Vice Admiral, advanced on the basis of combat citations, on November 1, 1946.

After graduation in July, 1911, he joined the battleship Minnesota which participated in the Naval Review in the North River, New York, 1912; was at Guantanamo, Cuba, during the civilian uprising; and was at Vera Cruz, Mexico, from April 23 to July 14, 1913. During the summer of 1913, he had additional duty in connection with the Navy Rifle Team at Wakefield, Massachusetts, and in September rejoined the Minnesota. When detached, he served from August to October, 1914 in the USS Prairie. For one year thereafter he had duty in the USS Washington, which cruised in the Caribbean, later remaining at Port Au Prince, Haiti.

Detached from the Washington in October, 1915, he was assigned duty in connection with fitting out the USS Dahlren, and in January, 1916 assumed command of the USS Duncan. For his services in that command during World War I, he was awarded the Navy Cross, and cited for “distinguishing service in the line of his profession as Commanding Officer of the USS Duncan, engaged in the important, exacting and hazardous duty of patrolling the waters infested with enemy submarines and mines, in escorting and protecting vitally important convoys of troops and supplies through these waters, and in offensive and defense action, vigorously and unremittingly prosecuted against all forms of naval activity.

When detached from the Duncan in January, 1919, he continued duty in command of destroyers until December, 1919, successively in the USS Monaghan, USS Drayton, and USS Walker. From December, 1919 until February, 1922, he served as Communications Officer in the office of the District Communication Superintendent, Fourth Naval District, Philadelphia, Pennsylvania. After transiting the Panama Canal in the USS Prairie, he had passage to San Diego, California, where he assumed command of the USS Percival in July, 1922, serving in that command until April, 1925.

From April, 1925 until November, 1927, he had duty in the Radio Division, Bureau of Engineering, Navy Department, Washington, DC Duty in command of the USS Billingsley, November 19, 1927 until May 1, 1930, was followed by brief duty in command of the USS J. Fred Talbott. May 1- July 15, 1930. Reporting in the Office of Naval Intelligence, Navy Department, in August, 1930, he was assigned duty as Assistant Naval Attaché, American Embassy, Paris, France, with additional similar duty as the American Embassy, Madrid, Spain, and at the American Legation, Lisbon, Portugal, serving from September 1930 until May, 1933. Returning to the United States, he again reported to the Office of Naval Intelligence.

In July, 1933, he was assigned duty as First Lieutenant and Damage Control Officer of the USS Northampton, flagship of Commander, Cruiser Division 4, Scouting Force, US Fleet. From March 15 to July 15, 1935, he served as Executive Officer of that cruiser. In August, 1935 he reported for duty in the Navy Department, Enlisted Personnel Division of the bureau of Navigation, and during that assignment, which extended to May, 1938, he had temporary additional duty as a Member of the Naval Mission to Brazil, at Rio de Janeiro. In June, 1938, he was assigned to duty as Executive Officer of the USS Maryland. After on year, he assumed command of the USS Nitro, naval transport, serving until July, 1940, when he returned to the United States.

Reporting to the Naval Academy, Annapolis, Maryland he was Head of the Department of Modern Languages one year, and the next year was Head of the Department of Seamanship and Navigation. One June 27, 1942, he assumed command of the battleship Mississippi, which operated in the Central and South Pacific war area. In November, 1942 he was designated Commander Service Squadron, South Pacific, with the accompany rank of Rear Admiral. For services in that command he was awarded the Legion of Merit, and cited “For exceptionally meritorious conduct… as Commanding Service Squadron, South Pacific, from November 20, 1942, to February 5, 1944… (He) effectively surmounted the many and difficult problems of logistics and Fleet Service in this area of intensive combat (making) possible the prompt repair of Fleet damage and the expeditious servicing of Advanced Naval Bases, thereby contributing against the Japanese….”

Upon his return to the United States in March, 1944, he had brief temporary duty in the Bureau of Naval Personnel, Navy Department, and on June 26, 1944 was named President of the Naval Examining and Retiring Board, Navy Department. He had additional duties as Senior Member, Board of Medals and Awards, and President of the Permanent Uniform Board, Bureau of Naval Personnel, until detached in January, 1945. Later that month he was designated Commander Naval Forces, under the Commanding General, Tenth Army Force in the Ryukyus, and served as such until August, 1945.

For “exceptionally meritorious service” as Commander Naval Forces Ryukyus, from January 15, 1945 until August 29, 1945, he was awarded the Gold Star in lieu of a second Legion of Merit with Combat “V”. After duty as Commander, Battleship Division 5, for one month, he returned to the United States to temporary duty in the Bureau of Naval Personnel, Navy Department. In December, 1945, he was ordered to duty as Commandant, US Naval Base, Philadelphia, Pennsylvania, and served as Acting Commandant of the Fourth Naval District there, on temporary additional duty. On July 3, 1946 he was relieved of all active duty, pending retirement on November 1, 1946.

In addition to the Navy Cross, the Legion of Merit, and Gold Star in lieu of second Legion of Merit, Vice Admiral Cobb has the Mexican Service Medal (USS Minnesota); the Haitian Campaign Medal (USS Washington); the Victory Medal, Destroyer Clasp (USS Duncan); the American Defense Service Medal, Fleet Clasp; the Asiatic-Pacific Campaign Medal; the American Campaign Medal; and the World War II Victory Medal. He also was awarded the Legion of Honor (with Diploma), Rank of Officer, by the Government of France, for service as Naval Attaché at Paris, France.