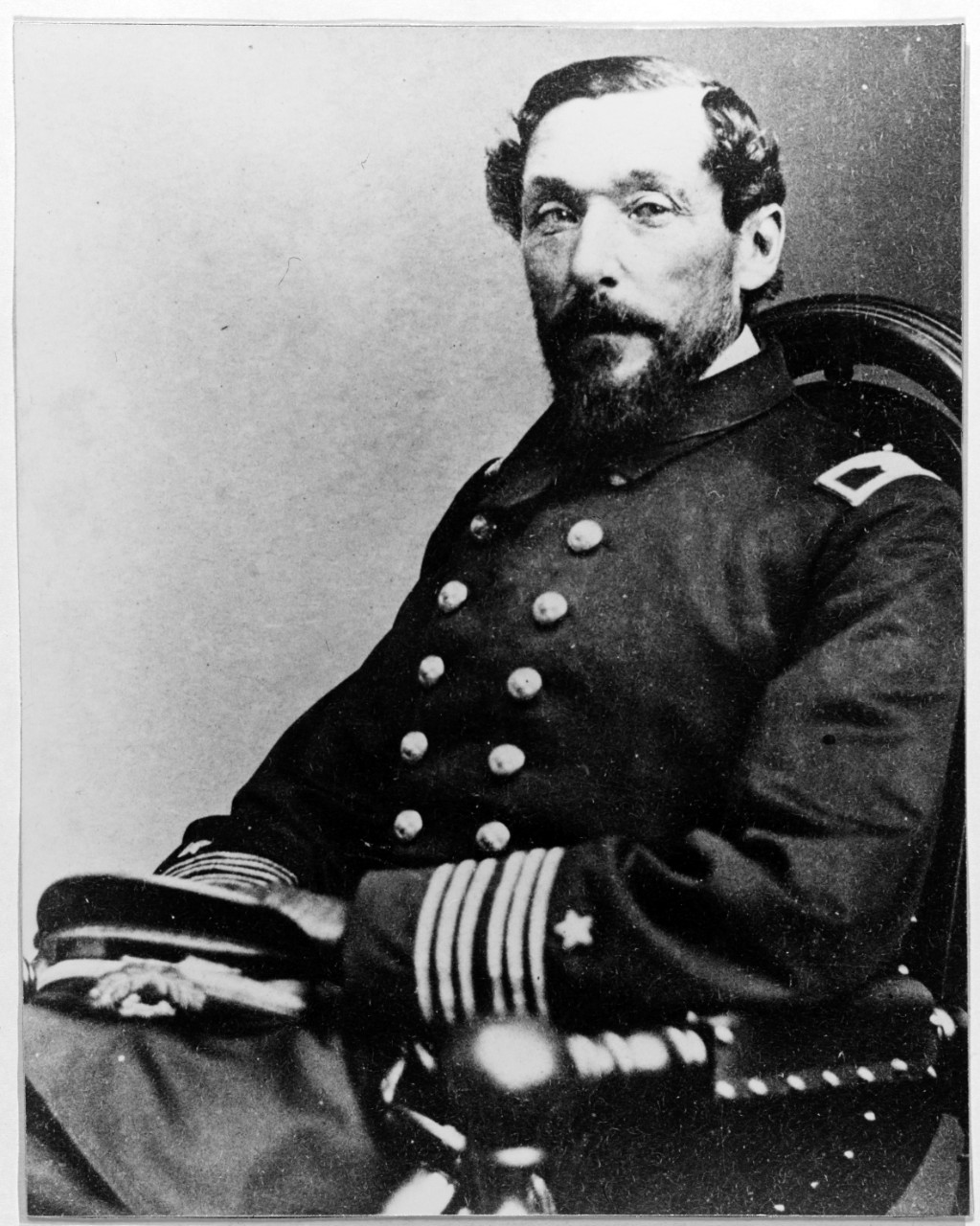 Percival Drayton-- born on 25 August 1812 in Charleston, S.C.-- was the son of William Drayton (later a U.S. representative and president of the Second Bank of the United States) and Anna (nee Gadsden). He was appointed a midshipman on 1 December 1827. He attended the New York Naval School and later served on board the frigate Hudson on the Brazil Squadron. Promoted to lieutenant in February 1838, Drayton would subsequently serve in the Brazil, Pacific, and Mediterranean Squadrons. He was also posted to assignments ashore at the U.S. Naval Observatory in Washington, D.C., and to the New York [N.Y] Navy Yard. Promoted to the rank of commander in September 1855, he later served as aide to Como. William B. Shubrick during the latter’s command of the Brazil Squadron and the Paraguay Expedition.

With the approach of the Civil War in early 1861, he received a posting to the Philadelphia [Pa.] Navy Yard and, as a demonstration of his loyalty to the Union, requested to become a citizen of Philadelphia. On ordnance duty, Drayton directed the construction and renovation of ships in preparation for war service. After the onset of hostilities, he commanded the screw steamer Pocahontas in Rear Adm. Samuel F. DuPont’s expedition against Port Royal, S.C., in November 1861. In the course of these operations, he engaged his older brother, Thomas F. Drayton, the Confederate general in command of the forts defending the port. He was subsequently given command of the sloop of war Pawnee and she conducted inshore operations along the coasts of South Carolina, Georgia, and northern Florida. Promoted to captain on 16 July 1862, he was placed in command of the monitor Passaic in September. Overseeing her outfitting, Drayton also worked with the naval engineer John Ericsson to improve the design of the Navy’s monitors. Later, he commanded Passaic in the attacks on Fort McAllister and Fort Sumter in March and April 1863 in DuPont’s abortive efforts to take Charleston.

After service ashore as Superintendent of Ordnance at the New York Navy Yard, but in December 1863, Drayton was re-assigned in December 1863 to Adm. David G. Farragut's West Gulf Blockading Squadron. As Fleet Captain, Drayton served gallantly in command of Farragut's flagship, the sloop of war Hartford, during the Battle of Mobile Bay on 5 August 1864. 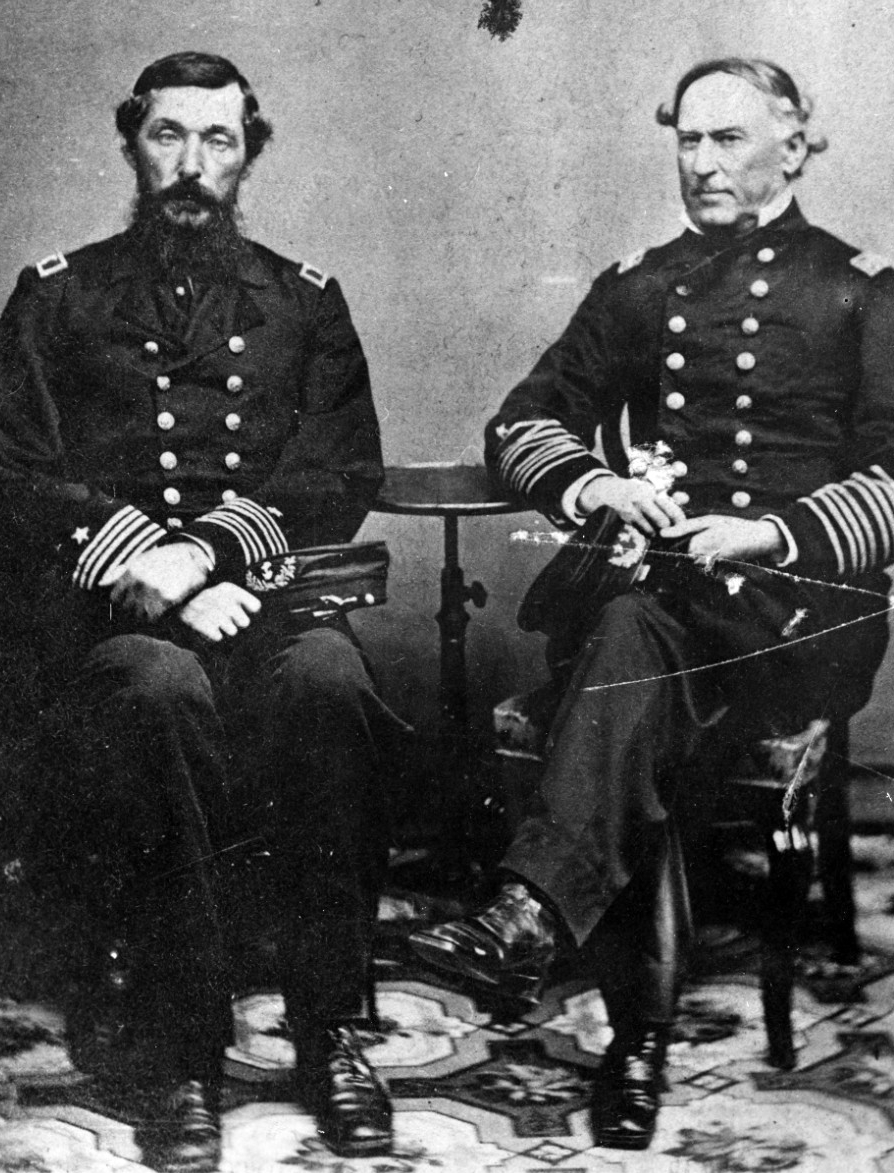 He was appointed the Chief of the Bureau of Navigation in April 1865, but died from an obstructed bowel on 4 August 1865. He was laid to rest at Laurel Hill Cemetery in Philadelphia and a monument was erected in his honor inside Trinity Church in New York City.

After the new year, she departed on 6 January 1911 for trial runs to Pensacola, Fla., and New Orleans, La., before returning to Key West on the 18th to prepare for participation in the aviation test flights of John A.D. McCurdy prior to the first flight from Florida to Cuba. Through March, the destroyer cruised with the 8th Division to Pensacola, Tampa, Fla., Galveston, Texas, Key West, and Cuban waters to conduct exercises and development problems. From 4 March 1912, the group was re-designated the Torpedo Flotilla, Atlantic Fleet and over the next two years the destroyer participated in the annual routine of winter exercises in the Caribbean followed by summer cruising and exercises off the coast of New England, interspersed with yard periods for regular maintenance.

In the wake of increased tensions stemming from the political unrest of the Mexican Revolution, Drayton steamed with her division from Key West, via Pensacola, on 9 April 1914 to serve on blockade duty off Tampico, Mexico. She subsequently made five trips between Mexico and the United States to take refugees out of the troubled areas. She returned to New York on 1 June, and then on to Newport on 1 August. In the days after her arrival at Newport, hostilities broke out in Europe. With President Woodrow Wilson’s proclamation of the United States’ neutral stance, the destroyer was assigned to neutrality patrol duties in the waters off New York. Additionally, she conducted torpedo and gunnery exercises out of Newport and in the Caribbean. This routine continued through 1915 and 1916. Drayton went into the Philadelphia Navy Yard on 31 October 1916 and remained there into 1917. 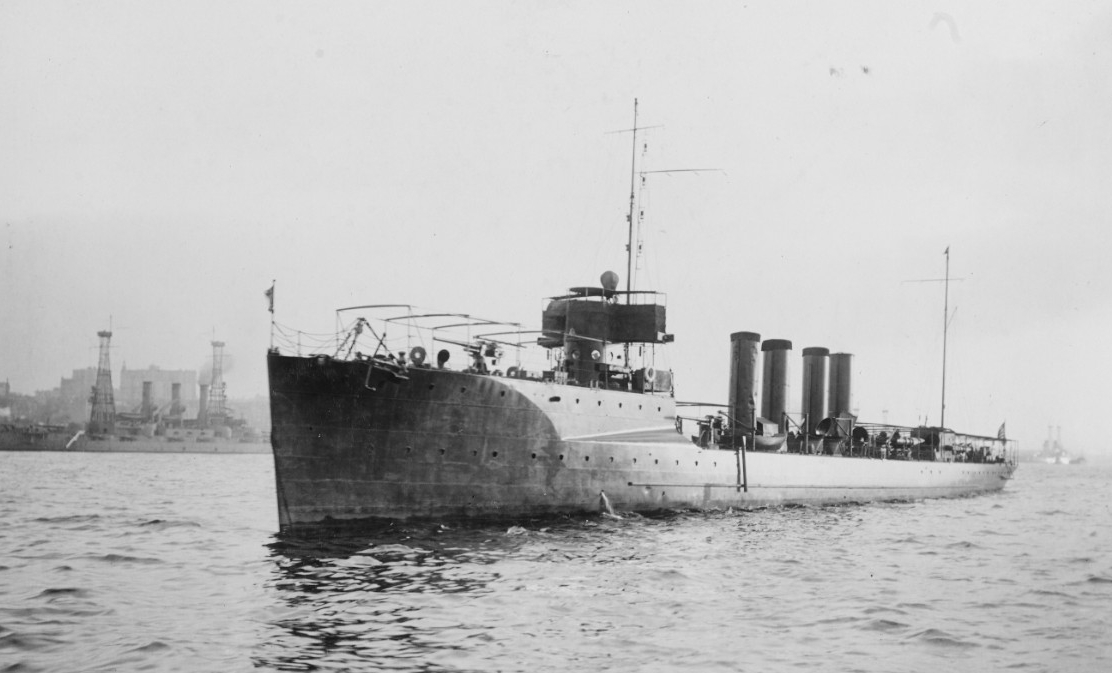 Drayton departed Philadelphia on 8 January bound for winter exercises in the Caribbean. After a week at sea, she raised Culebra, P.R., on the 15th. While underway on 11 February 1917, however, Drayton collided with Aylwin (Destroyer No. 47) in the vicinity of Cape Cruz, Cuba, a mishap that necessitated the convening of a board of investigation. 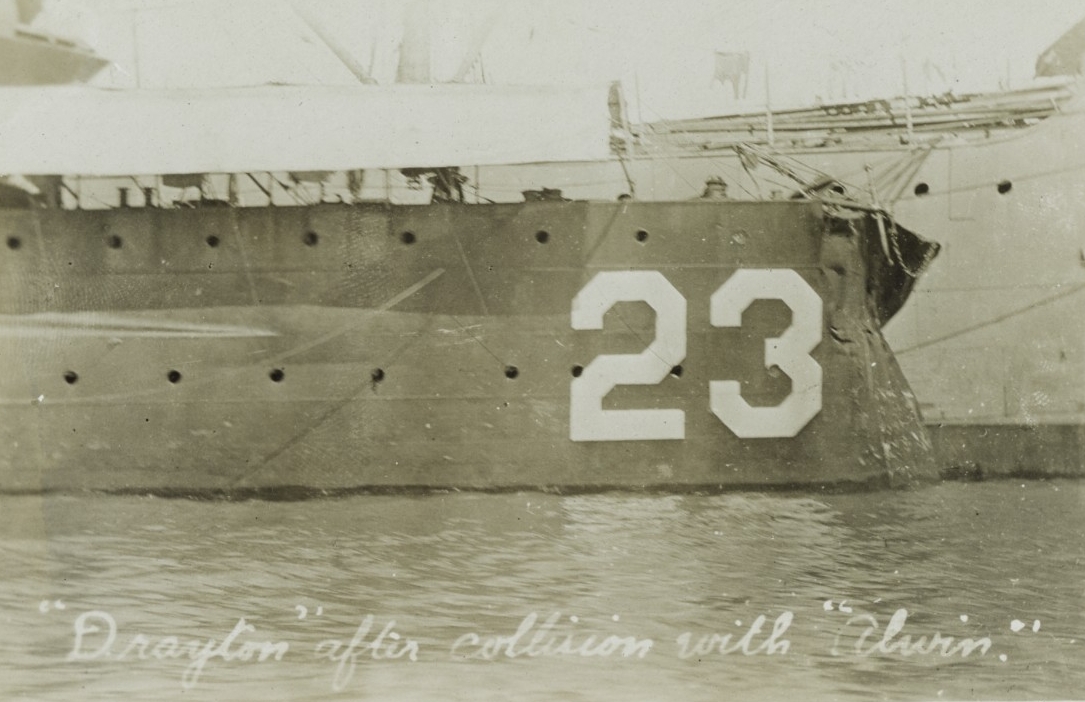 Caption: Drayton, damage to the ship's bow, after a collision with Aylwin (Destroyer No. 47). The original image was printed on postal card stock. Donation of Dr. Mark Kulikowski, 2006. (Naval History and Heritage Command Photograph, NH 103932)

Calling at Jacksonville, Fla. (5-11 April), she seized the German steamer Frieda Leonhardt and interned her crew in accordance with a proclamation issued by President Wilson upon the U.S. declaration of war against Germany on 6 April. Drayton arrived at Norfolk on 12 April and the next day reported for duty with Squadron Two of the Patrol Force off the east coast. Ordered detached from the squadron, along with Cassin (Destroyer No. 43) and Paulding (Destroyer No. 22), on 19 April. Drayton arrived at Norfolk on 26 April. Having moved to Charleston, S.C. on 1 May, she remained a day and then got underway, bound for Boston. Entering the Boston Navy Yard on 4 May, she began to fit out for distant service. On 7 May, the Office of the Chief of Naval Operations organized those destroyers fitting out for distant service into designated divisions. Drayton was placed into Destroyer Division Five along with Patterson (Destroyer No. 36), Paulding (Destroyer No. 22), Warrington (Destroyer No. 30), Trippe (Destroyer No. 33), and Jenkins (Destroyer No. 42) and received orders to depart for European waters.

Drayton departed from Boston with the division on 21 May 1917 and sailed, by way of St. John's, Newfoundland (24-26 May), to Queenstown [Cobh], Ireland (Base No. 6). Upon her arrival on 1 June, she reported for duty to the British Commander, Coast of Ireland, Vice Adm. Lewis Bayly, RN. On 5 June, Drayton took up her sector as assigned and patrolled along the coast of Ireland, escorting both inbound and outbound ships to the British Isles. On 20 June, Drayton was underway in company with the British steamer Bovic, when she parted to search for the German submarine U-62 (Kapitänleutnant Ernst Hashagen commanding), which had torpedoed the British steamer Bengore Head. Unable to locate the U-boat, the destroyer rescued 32 survivors who were later landed at Bantry, Ireland.

On 28 June 1917, Drayton, along with Patterson, Warrington, Trippe, Paulding, Drayton, and Walke (Destroyer No. 34) rendezvoused with Group 4 of the First American Expeditionary Force (AEF) convoy which sailed in four groups from New York bound for St. Nazaire, France, on 14 June. Group 4 consisted of the four cargo ships Montanan, Dakotan (Id. No. 3882), El Occidente (Id. No. 3307), and Edward Luckenbach (Id. No. 1662) escorted by St. Louis (Cruiser No. 20), the troop transport Hancock, Shaw (Destroyer No. 68), Ammen (Destroyer No. 35), Flusser (Destroyer No. 20), and Parker (Destroyer No. 48). The group and its escorts stood in to St. Nazaire without incident on 2 July. Afterward, Drayton took part in a submarine hunt with two French cruisers before coming back to St. Nazaire that same day. Getting underway on the 3rd, she returned to Queenstown on the 4th.

Escorting the cargo ship Houston along with Perkins (Destroyer No. 26) from Brest, France (Base 7), to Queenstown on 8 September 1917, Drayton observed and engaged a submarine at 6:10 a.m. Opening with gunfire at 7,000 yards, she continued firing until 6:23 a.m. when the submarine submerged. Continuing on her mission, she twice more observed submarines on the surface. She again engaged but in both instances, the U-boat submerged and escaped the contact with the destroyer. Houston and her escorts arrived at Queenstown early the next day.

Drayton, , was escorting the convoy straggler Oakland Grange southwest of Ireland when the British oiler Crenella was torpedoed by U-101 (Kapitänleutnant Karl Koopmann) on 26 November 1917. Drayton dropped a depth charge and then maneuvered to protect Oakland Grange. Though damaged, the oiler was able to continue her passage under the protection of Cushing (Destroyer No. 55). Though it was reported that the depth charge had “badly damaged” the submarine, U-101 continued to operate through the end of the war. On 15 December, with Benham (Destroyer No. 49), Drayton picked up the survivors, 39 souls in all, of the British steamer Foylemore that had fouled a mine laid by UB-55 (Kapitänleutnant Ralph Wenninger).

Drayton and Jarvis (Destroyer No. 38), having escorted the transport Hercules from Queenstown into Brest on 15 February 1918, were transferred the Base 7 and reported to Commander, U.S. Naval Forces Operating in France. While escorting an outbound convoy from Brest on 2 August, Drayton dropped a “diamond” of four depth charges on an observed oil slick. While there was no proof of a kill, the Admiralty determined: “There was a submarine in the vicinity and it continued to operate.” Nine days later, while escorting a convoy, the destroyer likewise dropped a barrage of depth charges after a reported torpedo and periscope sighting, but like that on the 2nd, there was no proof of a sunken U-boat. On the 15th, she was again escorting a convoy and again dropped a series of depth charges on an observed oil slick from a suspected U-boat, again with negative results. Drayton continued her escort and antisubmarine operations out of Brest through the end of hostilities on 11 November. 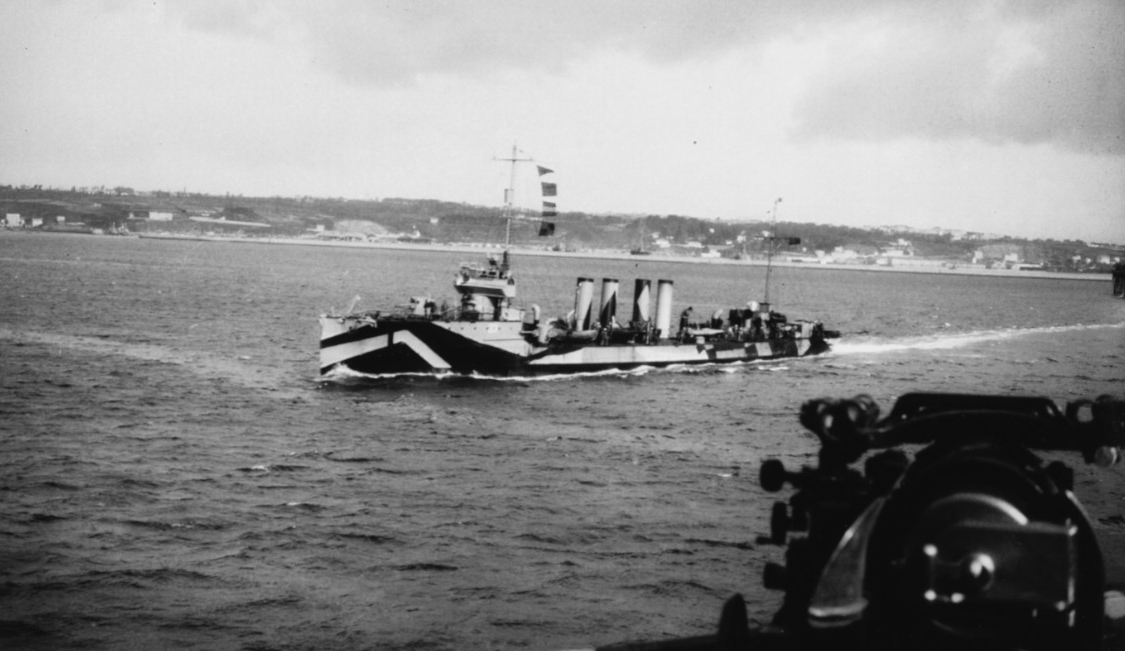 With the war’s end, Drayton, along with the destroyer Isabel (SP-521), Tucker (Destroyer No. 57), Cummings (Destroyer No. 44), Burrows (Destroyer No. 29), and McDougal (Destroyer No. 54), stood out of Brest on 16 December 1918 for a return to the United States via the Azores and Bermuda. She arrived at Boston on 2 January 1919 and entered the Navy Yard for post-deployment overhaul. With the completion of that work on 3 February, Drayton returned to routine duties with the Atlantic Fleet’s Destroyer Force and cruised along the east coast on various evolutions until 18 July when she reported to the Philadelphia Navy Yard in company with seven other destroyers slated for decommissioning. 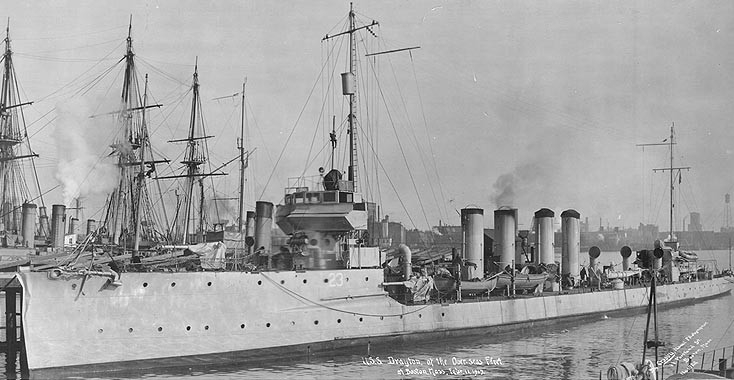 Drayton was decommissioned on 17 November 1919. She was re-designated DD-23 on 17 July 1920 as part of a Navy-wide administrative reorganization. On 1 July 1933 her name was dropped and she was known as DD-23 until stricken from the Navy list on 8 March 1935. She was sold on 28 June 1935 to M. Black & Co., Norfolk, Va., in accordance with the terms of the London Treaty for the Reduction of Naval Armament and scrapped by the purchaser on 25 June 1936.