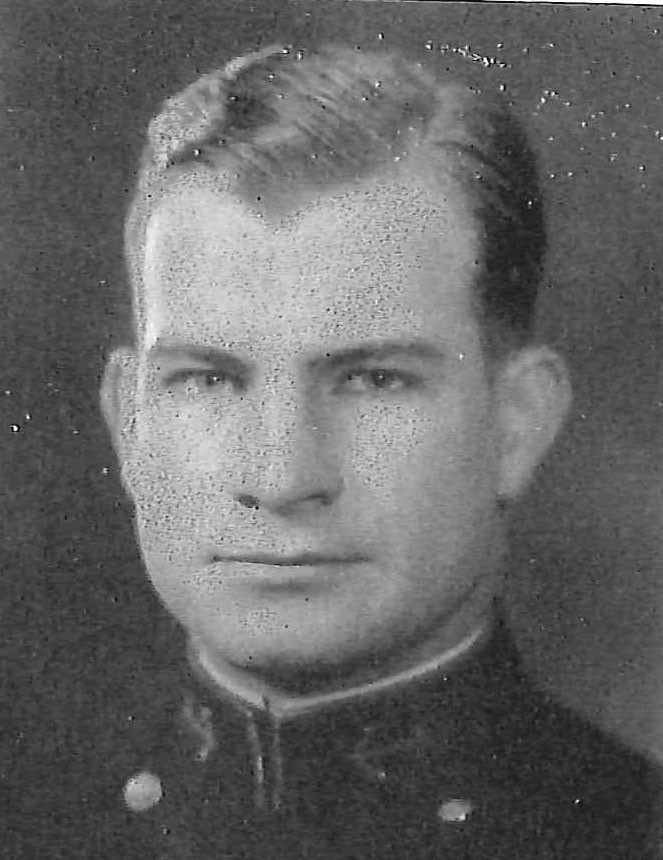 Thomas Edward Chambers was born in Dyersburg, Tennessee, on December 4, 1908, son of R. Donald and Anna Katherine (Ford) Chambers, both now deceased. He attended Dyersburg High School and Murray State Teachers College Murray, Kentucky, prior to his appointment to the US Naval Academy, which he entered in 1928. As a Midshipman he participated in football, crew and boxing. He was graduated on June 2, 1932, and through subsequent promotions attained the rank of Captain, his date of rank June 1, 1951.

After graduation from the Naval Academy in June 1932, he was assigned to USS Arizona, and served until March 1934 as a junior officer (deck, gunnery, engineering and communications) while that battleship operated with the Battle Force in the Pacific. In April 1934 he joined USS Preble (DD 345), also a unit of the Battle Force in which he served as Torpedo Officer and First Lieutenant, and during that period attended Torpedo School at San Diego, California. He was detached in February 1937, and two months later reported to USS Canopus (AS 9), as Torpedo, Gunnery and Repair Officer, while that vessel operated as tender and flagship of Submarine Squadron 5, Asiatic Fleet.

Remaining on Asiatic Station, he had brief duty as Gunnery Officer of USS Bulmer (DD 222), a unit of Destroyer 14, and from January 1938 to August 1939 as Gunnery, Torpedo Repair Officer of USS Black Hawk, (AD 9), tender for Destroyer Squadron 5, Asiatic Fleet. Upon his return to the United States, he was ordered to the Naval Academy, where he served as an instructor in the Department of Navigation until May 194. In June of that year he joined USS Bagley (DD 386), of the Pacific Fleet, and was on board as Gunnery and Executive Officer at the outbreak of World War II in December 1941.

“For heroic service as Commanding Officer of the USS Bagley in action against enemy Japanese forces in the Southwest Pacific War Area from February 4, 1943 to February 27, 1944…” he was awarded a Gold Star in lieu of the second Bronze Star Medal with Combat “V.” The citation states that he “contributed in large measure to the success of his ship in carrying out numerous patrol and escort missions while operating as a unit of the Seventh Fleet in the vicinity of Australia, the Coral Sea and New Guinea… (directing) in providing effective screening for the landing of our troops and supplies at Arawe, Cape Gloucester, Saidor and other Allied Bases on the New Guinea Coast...”

He assumed command of USS Lindsey (DM 32), of Mine Force, Pacific Fleet, in April 1944. While under his command the Lindsey took part in the Okinawa campaign. On April 12, 1945, while on radar picket station northwest of the area, she was attacked simultaneously by four suicide planes, one of which splashed so close to port side as to cause the forward magazine to explode, blowing off some 80 feet of the bow section and opening the entire forward fire room. Controlling the flooding he returned his ship to Kerama Rhetto without assistance and after temporary repairs, he backed the ship to Guam where a false bow was enstalled, and subsequently took the ship to the Norfolk Navy Yard for rebuilding.

He was awarded the Silver Star Medal “For conspicuous gallantry and intrepidity as Commanding Officer of the USS Lindsay in action against enemy Japanese forces in the vicinity of Okinawa on April 12, 1945. The citation states “When Mount  One magazine exploded as the result of two suicide planes crashing on his ships, (he) skillfully supervised his officers and crew in taking speedy measures to save his vessel…”

Detached from the Lindsay in October 1945, after the Japanese surrender, he returned to the United States, and during the next three years served as Executive Officer, V-12 Unit, and Associate Professor of Naval Science and Tactics at the University of Southern California, Los Angeles, California. When that tour of duty was completed in August 1948, he joined USS San Pablo (AVP 30) of service Force, Pacific Fleet, as Commanding Officer and Commander Oceanic Survey Group in survey operations. He served in that capacity until October 1949, and two months later became District Ordnance Officer, Eleventh Naval District, San Diego, California.

In January 1952, he assumed command of USS Magoffin, operating with Amphibious Force, Pacific Fleet, in the Korean Area. A year later he reported as Commanding Officer of the US Naval Amphibious Training Unit, Coronado, California. In that assignment he also served as a member of Pacific Fleet Ship-to Shore Movement Board, representing Commander Amphibious Forces, Pacific, and as Head Coach, PhibPac Boxing Team.

Detached in November 1955 he next reported for duty as Commander Mine Squadron 8. Remaining there until August 1957 he currently serves as Commanding Officer of the Naval Station, San Juan, P.R.