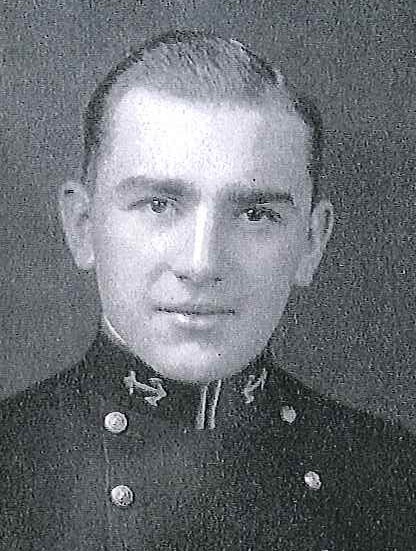 Charles Antoniak was born on December 26, 1911, in Auburn, New York, son of John and Helen (Zakielarsz) Antoniak.  He attended Mynderse Academy, Seneca Falls, New York, before his appointment to the US Naval Academy, Annapolis, Maryland, from his native state in 1930.  As a Midshipman he was a member of the B-squad football and B-squad wrestling teams.  Graduated and commissioned Ensign on May 31, 1934, he subsequently attained the rank of Commander to date from February 1, 1944.

Following graduation rom the Naval Academy in 1934, he joined USS Mississippi and in June 1935, transferred to USS Dent.  Detached from that destroyer in July 1936, he returned to the United States for flight training at the Naval Air Station, Pensacola, Florida.  Designated Naval Aviator on July 6, 1937, he reported for duty with Scouting Squadron FORTY TWO, and in June 1940 was assigned to Utility Squadron TWO.

From August 1941 to October 1943 he attended a course in aeronautical engineering at the Postgraduate School, Annapolis, Maryland, continuing his instruction at the Massachusetts Institute of Technology at Cambridge.  He received the degree of Master of Science from the latter in April 1944, and then reported for duty in the Bureau of Aeronautics, Navy Department, Washington, DC.  From July 7 of the same year, he was assigned to the Engineering Division, Power Plant Design Branch.