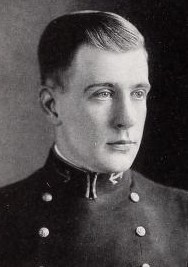 Edward Mallon Fagan was born in Toledo, Ohio, on October 2, 1910, son of Joseph C. and Elizabeth Mallon Fagan. He attended public schools of Toledo, graduation from Scott High School in 1928, and for two years thereafter was a student (pre-engineering) at Toledo University. He entered the US Naval Academy, Annapolis, Maryland, on July 28, 1930, as a Midshipman from Ohio, and while there was a member of the Radio Club and Quarterdeck Society. He was graduated and commissioned Ensign on May 31, 1934, and through subsequent promotions attained the rank of Captain to date from July 1, 1953.

Following graduation from the Naval Academy in 1934, he served at sea for years as a junior line officer in the USS Maryland, a unit of Battleship Division 4, Battle Force. In 1936-1937 he attended the Naval Finance and Supply School, Philadelphia, Pennsylvania, and upon completion of the course was transferred from the Line to the Supply Crops of the Navy and assigned to the USS Medusa. He served aboard that repair ship as Assistant for Disbursing from June 30, 1937 until detached two years later for duty as Disbursing Officer for Destroyer Division 82, Atlantic Squadron, US Fleet, attached to the USS Hatfield, flagship.

Ordered next to the Submarine Base, New London, Connecticut, he served in the Supply Department of that Base from early 1940 until the United States entered World War II in December 1941. He joined the USS Milwaukee that month, to serve as Supply Officer while that cruiser operated in that Caribbean and the South Atlantic on patrol and escort duty. After his detachment in August 1943, he reported for a tour of shore duty at the Naval Supply Depot, Mechanicsburg, Pennsylvania, and served there as Advanced Base Section Officer under the Supply Officer in Command until November 1944.

He had a year’s duty in the Logistics Planning Division, Bureau of Supplies and Accounts, Navy Department, Washington, DC, after which he served from October 1945 to June 1947 as Branch Officer at the Naval Supply Center, Pearl Harbor, T.H. Upon his return to the United States he reported to the Naval War College, Newport, Rhode Island, and when detached in May 1948 was ordered to the Bureau of Ships, Navy Department. There he served three years in the Contract Division.

and two years later was detached for duty as Commanding Officer, Naval Supply Depot, Guam, Marianas Islands. In May 1956 he was ordered to the Office of Naval Material, Navy Department, and on October 29, 1956, was designated Assistant Chief of Naval Material and Director of the Procurement Division.

His is a member of all Masonic Bodies including the Shrine located in Toledo, Ohio, and the U.S. Naval Academy Alumni Association.