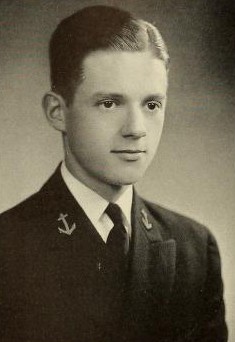 John Burnett Cline was born in Marion, Illinois, on June 6, 1912. He attended Kemper Military School in Burnsville, Missouri, for a year, and after graduation entered the US Naval Academy, Annapolis, Maryland, on appointment from Illinois on June 15, 1931. As a Midshipman he participated in Athletics (basketball, track), was Assistant Musical Clubs Director and was N.A ten Lender in 1935. Graduated with the degree of Bachelor of Science on June 6, 1935, he was commissioned Ensign in the US Navy on that date and through subsequent advancement and his transfer to the Supply Corps of the Navy from the Line in 1957, he attained the rank of Captain, SC, USN, to date from March 1, 1954.

After graduation from the Naval Academy in June 1935, he had a year’s service at sea on board the USS West Virginia, his duties in gunnery, communications and damage control. In September 1936 he reported to the Naval Finance and Supply School, Philadelphia, Pennsylvania, and upon graduation in June 1937 was ordered to the USS Canopus, on China Station, for duty as Disbursing Officer. In September 1939 he returned to the United States, and for two years thereafter served as Assistant Supply Officer of the Naval Air Station, Pensacola.

In October 1941, shortly prior to the outbreak of World War II, he arrived at the Naval Station, Tutuila, American Samoa. There, during the early period of the war, until July 1943, he served as Disbursing and Communication Officer, and ran the Bank of American Samoa. From August 1943 until March 1945 he was assigned to the Bureau of Supplies and Accounts (Logistic Planning), and during the four months to follow served as Logistic Officer on the Staff of Commander Western Sea Frontier. In July 1945 he reported as Supply Officer for CUB 18, participating in the initial occupation of Japan. In January 1946 he was transferred to duty as Logistics Officer on the Staff of Commander US Naval Forces, Far East, and returned to the United States from Japan in the summer of 1947.

Reporting in August of that year to the Bureau of Supplies and Accounts, he served for a year this time, assigned to Fiscal Planning. A student at Harvard University Graduate School of Business Administration, from September 1948 to June 1950, he was graduated with the degree of Master of Business Administration. He next had duty as Supply and Fiscal Officer at the Marine Corps Air Station, Cherry Point, North Carolina, and from May 1952 until July 1953 was at sea as Supply Officer of the new aircraft carrier, USS Franklin D. Roosevelt.

He had a two year tour of duty at Headquarters at the North Atlantic Treaty Organization-Supreme Headquarters, Allied Powers, Europe, as Chief of the Navy Section, Supply and Maintenance Branch of the Logistics Division. From August 1955 until June 1956 he was at student at the National War College, Washington, DC, after which for two years he served as Chief of Inspection at the Military Clothing and Textile Supply Agency, Philadelphia. In July of 1958 he joined the Staff of the Commander in Chief, Pacific Fleet (Logistics Division), and in July 1960 again reported to the Navy Department, Washington, DC, this time for duty as Assistant Chief of Naval Material and Director of the Procurement Division. There he also serves as Chief of the Navy Contract Adjustment Board.