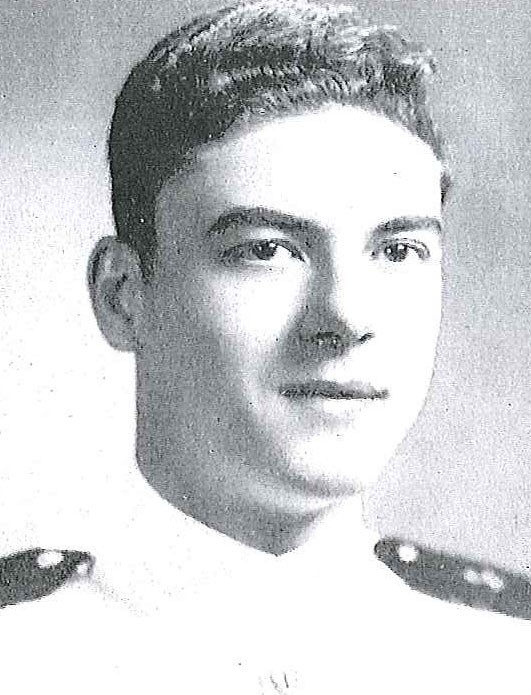 Carlos Dew Jr., was born in El Paso, Texas, on October 23, 1924, son of Carlos and Kate (Smith) Dew, both new deceased. He graduated from Peabody High School, Trenton, Tennessee, then attended Memphis (Tennessee) State College and the College of Mines and Metallurgy at El Paso. He entered naval service on January 21, 1943 and had boot training at the Naval Training Center, Great Lakes, Illinois. From March to May 1943 he attended the Naval Academy Preparatory School, Bainbridge, Maryland, after which he was assigned to the Receiving Station, Norfolk, Virginia. He entered the Naval Academy, Annapolis, Maryland, on appointment from his native state in 1943. Graduated and commissioned Ensign with the Class of 1947 on June 5, 1946 (accelerated course due to World War II), he subsequently advanced in rank to that of Captain, to date from May 1, 1967.

Following graduation from the Naval Academy in 1946, he had aviation indoctrination at the Naval Air Station, Jacksonville, Florida, until August of that year, then joined USS Henry A Wiley (DM-29). When that minelayer was decommissioned on January 29, 1947, he was ordered to the Bethlehem Steel Company, Shipbuilding Division, San Francisco, California, where USS Keppler (DD-765) was building. He reported on board that destroyer upon her commissioning May 23, 1947. After a period of shakedown, the Keppler participated in training exercised in Hawaiian waters, then sailed for Australia and China.

Detached from the Keppler in June 1948, he next had submarine training at the Submarine School, New London, Connecticut and in January 1949 joined USS Cusk (SS-348), which was engaged in LOON guided missile operations. In October 1950 he was assigned to the recommissioned USS Entemedor, which, after training exercises off the coast of California, sailed early in 1951 for New London and operated in the Atlantic. In February 1952 he reported for pre-commissioning duty in USS Trout (SS-566), building at the General Dynamics Corporation, Electric Boat Division, Groton, Connecticut and became her Gunnery Officer upon her commissioning, June 27, 1952.

From May 1953 to August 1955 he was Assistant Head of the Submarine Launched Branch, Guided Missile Division, Office of the Chief of Naval Operations, Navy Department, Washington, DC, after which he served as Executive Officer of USS Argonaut (SS-475), and Regulus guidance submarine. In June 1957 he assumed command of USS Barbero (SS-317), the first Atlantic Fleet guided missile submarine. He transferred in July 1959 to USS Forrestal (CVA-59) to serve as Assistant to the Engineer Officer and as such was engaged in the Study of her steam plant preliminary to nuclear power study. During the period December 1959 to December 1960, he attended the Nuclear Power Command Course in the Office of the Assistant Director, Naval Reactor Branch, Atomic Energy Commission, Washington, DC, then was a student (POLARIS) Command Course at the Naval Guided Missile School, Dam Neck, Virginia.

In April 1961 he reported as Executive Officer of the Gold Crew of USS Ethan Allen (SSB(N)-608) and participated in two POLARIS deterrent patrols. He assumed command of the Gold Crew of that fleet ballistic missile submarine in April 1963, which, under his command, made seven POLARIS deterrent patrols. Detached from command of the Ethan Allen in May 1966, he had temporary duty as Assistant to the Readiness Officer on the Staff of Commander Submarine Flotilla TWO until July of that year, then had instruction in Naval Warfare at the Naval War College, Newport, Rhode Island. He was Assistant Commander in Chief, Atlantic Representative to the Joint Strategic Target Planning Staff, Offutt Air Force Base, Nebraska, from July 1967 to August 1968, when he became Commander in Chief, Atlantic Representative to that Planning Staff. In 1967 he received the degree of Master of Science in Foreign Affairs from George Washington University, Washington, DC.

In September 1969 he reported as Commander Submarine Squadron Seven and in March 1971 was ordered detached for duty in the Office of the Chief of Naval Operations, Navy Department.