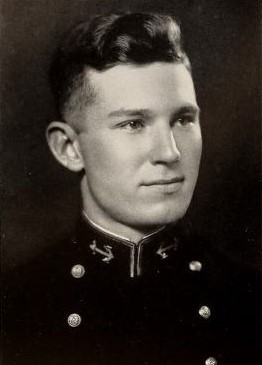 Thomas Bullard Dabney was born in Rogers, Arkansas, on April 23, 1913, son of Charles and Lora C.  (Bullard) Dabney.  He attended public schools in Muskogee, Oklahoma, and enlisted in the US Navy on June 1, 1931.  He served one year in the USS Texas, and was honorably discharged on July 5, 1932, to enter the US Naval Academy, Annapolis, Maryland.  As a Midshipman he was a member of the Rifle Team, and participated in wrestling.  Graduated and commissioned Ensign on June 4, 1936, he subsequently attained the rank of Commander to date from March 15, 1944.

After graduation from the Naval Academy, he was assigned first to the USS New York, of Battleship Division One, Battle Force.  In March 1937 he was transferred to the USS Chester, and served aboard until November 1938 while she operated with Cruiser Division 5, Scouting Force.  For eighteen months thereafter he had communication duty on the staff of Commander Scouting Force, attached to the USS Indianapolis flagship.  In June 1940 he joined the USS Bernadou, a unit of Destroyer Squadron 30, Atlantic Squadron, and continued duty in that destroyer until September 1941.

Several months’ instruction in submarines at the Submarine School, New London, Connecticut, preceded successive duty in the USS Pompano, January to May, 1942; and the USS Plunger, May 1942 to July 1943.  In the latter submarine he participated in several war patrols; the capture and defense of Guadalcanal; the Battle of Midway; and operations designated by the Commander Seventh Fleet.  For outstanding service while aboard the Plunger, he was awarded the Silver Star Medal, the Gold Star in lieu of the Second Bronze Star Medal with Combat “V,” and a Letter of Commendation with Ribbon and Combat “V,” from the Commander in Chief, Pacific Fleet.  The citations follows in part:

“ Silver Start Medal: “For conspicuous gallantry and intrepidity in action while serving aboard a US Submarine during war patrols in enemy Japanese controlled waters…(He) served as Executive Officer, Navigator, and Assistant Approach Officer during numerous hazardous missions in which his vessel succeeded in sinking an important amount of hostile shipping. His outstanding skill and tenacious devotion to duty contributed materially to the success of our operations at this time…”

Gold Star in lieu of Second Bronze Star Medal: “For heroic service as Damage Control Officer on board the USS Plunger during three highly successful War Patrols in enemy Japanese-controlled waters.  When his ship was in imminent danger from severe and prolonged depth-charge attacks…(he) tirelessly inspected his ship, effected urgently needed repairs, and…rendered valuable assistance in the Plunger’s withdrawal from a confined area with only minor damage…”

Letter of Commendation:  “For material assistance during the aggressive and successful conduct of an offensive submarine War Patrol from May 27, 1942 to July 15, 1942, of which thirteen days were spent in the immediate proximity of the enemy controlled shore and twelve days were spent in assigned areas in connection with the Battle of Midway…”

Following duty from July to September 1943 with Submarine Force, Pacific Fleet, he reported to the Office of the Supervisor of ships, Groton, Connecticut, to assist in fitting our the USS Becuna (SS 319) he joined that submarine at her commissioning on May 27, 1944, and served aboard her for six months, during which time the Becuna participated in the Western Carolines operation and the Leyte landings, August to November 1944.  In December of that year he assumed command of the USS Guitarro, in which command he served throughout the remaining war period.

He was awarded the Bronze Star Medal with Combat “V,” for “heroic service as Commanding Officer of the USS Guitarro during the Fifth War Patrol of that vessel in the enemy Japanese-controlled waters of Tonkin Gulf from April 9 to June 8, 1945…” The citation continues:  “Constantly faced with the dangers of navigating in shoal waters, the possibility of aerial bombings and detection by enemy patrol craft, Commander Dabney courageously maneuvered his vessel…completing an extremely important mission…evaded all hostile anti-submarine countermeasures and brought his ship back to port…”

Transferring in November 1945 to command of the USS Plaice, he remained in command of that submarine until April 1948, when he was detached for shore duty.  From June of that year until August 1951 he served in the Bureau of Naval Personnel, Navy Department, Washington, DC  He then had five months’ instruction at the Armed Forces Staff College, Norfolk, Virginia, and since February 1952 has been assigned to Headquarters, European Command.