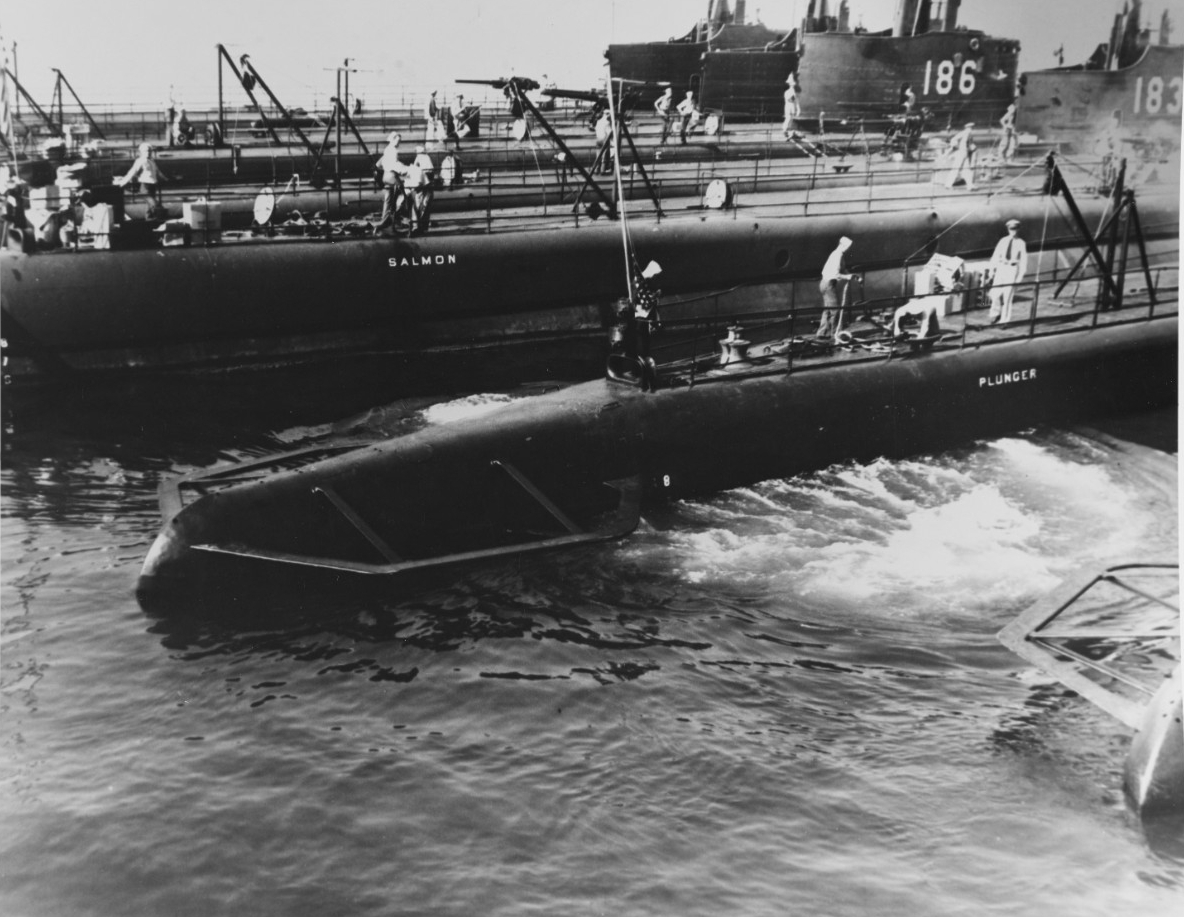 A diver, a daring gambler.

Plunger, the first submarine torpedo boat to be built for the Navy, was authorized by Congress 3 March 1893; a contract for her construction was awarded to Holland Torpedo Boat Co. 13 March 1895. However, the boat and the contract were cancelled in April 1900.

Plunger departed Gravesend Bay, N.Y. 15 April 1937 for shakedown cruise to Guantanamo Bay, the Canal Zone, and Guayaquil, Ecuador. In November, following post-shakedown alterations at Portsmouth, she steamed to San Diego to join SubDiv 14, SubRon 6. Continuing operations in the San Diego area for the next several years, Plunger joined Holland (AS-3) and 5 P-class subs 15 March 1938 for a cruise to Dutch Harbor, Alaska. Practice cruises to waters off Panama and Hawaii occupied the next several years. On 30 November 1941, she reported to Pearl Harbor and was off Diamond Head when Japanese planes attacked 7 December.

With Gudgeon (SS-211) and Pollack (SS-180), Plunger departed Pearl Harbor the 14th on her first war patrol to Kii Suido, a principal entrance into the Inland Sea and an important funnel to industrial bases in the area. She sank Japanese cargo ship Eizon Maru 18 January 1942.

Plunger's 2nd war patrol, 5 June to 15 July, took her off Shanghai. On this patrol, Plunger sank 4,700-ton cargo ship Ukai Maru No. 5 on 30 June and Unyo Maru No. 3 on 2 July before returning to Midway the 15th. While on this patrol, she sighted Italian steamer SS Conte Verde, proceeding to the U.S. with diplomats on board, including Ambassador Grew.

In October, as U.S. forces pushed on to Matanikau and Cape Esperance, Plunger departed Pearl Harbor on the 12th to reconnoiter the area and to block the "Tokyo Express." However, Plunger hit an uncharted reef 2 November, destroying her sound gear and damaging her bottom.

After repairing at Brisbane, Plunger returned to the Guadalcanal area for her fourth war patrol and operated off Munda, where Japanese barges were coming in at night, unloading troops and supplies, and departing by day-break. On the night of 16-17 December she slipped past four destroyers and attacked two others unloading at Munda Bar. After seeing two of her "fish" explode, she slipped away from a counterattack. After another attack with unknown results the next night, and a bomber attack while heading home 8 January 1943, she arrived Pearl Harbor 12 January. 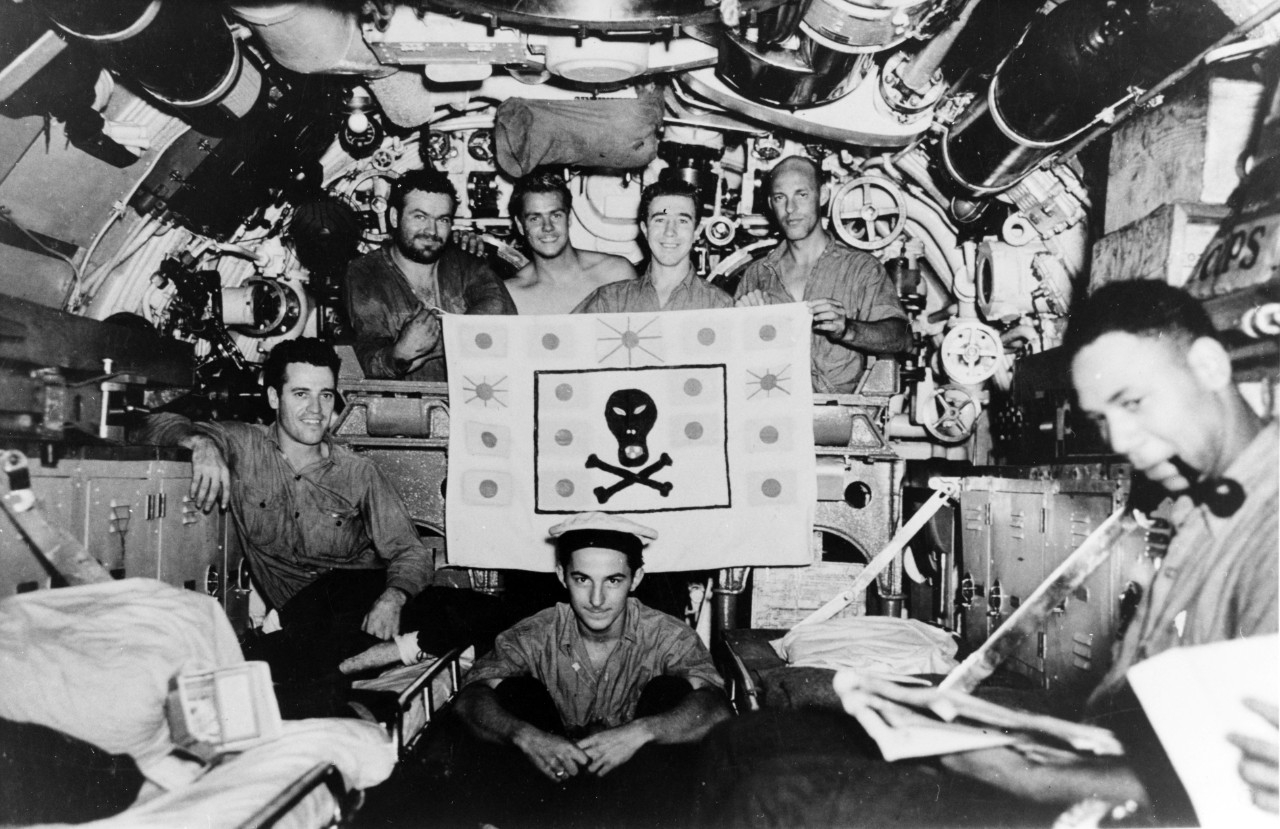 Plunger's (SS-179) crew display her battleflag. The man seated in the center appears to be wearing a Japanese sailor's hat. The photograph is dated 21 June 1943, following Plunger's sixth war patrol. Official U.S. Navy Photograph, now in the collections of the National Archives, 80-G-72010.

Plunger continued reconnaissance patrols throughout the spring and summer. She sank Taihosan Maru 12 March, and destroyed Tatsutake Maru and Kinai Maru 10 May. In June, she joined Lapon and Permit in the first U.S. penetration into the Sea of Japan, an area abounding with Japanese shipping. Crossing the southern end of the Sea of Okhotsk, the ships returned to Midway 26 July but departed again 6 August to return to the Sea of Okhotsk. Plunger sank 3,404-ton Seitai Maru there 20 August and 4,655-ton Ryokai Maru 22 August. Returning to Pearl Harbor 5 September, the hips were the only U.S. vessels to complete 2 patrols to that Sea until the final weeks of the war.

In October, Plunger reconnoitered in the Marshalls area. Plunger added lifeguard duties to her operations as U.S. bombers hit the islands. She stopped to pick up a downed pilot 15 November. During the rescue, a "Zero" strafed the boat, seriously wounding the executive officer and 5 bluejackets. Nevertheless, the submarine rescued Lt. (j.g.) Franklin George Schramm.

Frequent depth-charge attacks pursued Plunger in January 1944 as she patrolled off the Japanese main islands. The risk was profitable, however, as Plunger sank Toyo Maru No. 5 and Toyo Maru No. 8 on 2 February and Kimishima Maru on the 23d. Returning to Pearl Harbor 8 March, Plunger departed again 8 May to patrol the Bonin Islands. In July, she patrolled in and around Truk.

On 19 September 1944 she reported to Pearl Harbor for overhaul. She departed 15 February 1945 for New London, to serve in a training capacity until 25 October, when she reported to New Haven for Navy Day celebrations. On 30 October, she reported to the Boston Navy Yard, where she decommissioned 15 November 1945.

Retained in an inactive status, Plunger was fitted for service as a Naval Reserve Training vessel and reported to Brooklyn, N.Y. in May 1946, remaining there until 8 May 1952, when she departed for Jacksonville, Fla. to support the Naval Reserve Training Program. Returning to New York 18 February 1954, she was declared unessential 5 July 1956. Struck from the Navy Register 6 July 1956, she was sold to Bethlehem Steel Co., Bethlehem, Pa. 22 April 1957.