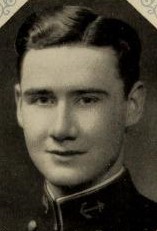 Arthur Ingoldsby Flaherty was born in Worcester, Massachusetts, on April 17. 1910, son of Edward H. and Mary A. (Short) Flaherty. He attended public schools in Worcester, and entered the US Naval Academy as a Midshipman from Massachusetts, on July 21, 1927. Graduated with the degree of Bachelor of Science, and commissioned Ensign on June 4, 1931, he subsequently advanced in rank to that of Captain in the Civil Engineer Corps of the US Navy, to date from August 1, 1949.

After graduation from the Navy Academy in 1931, he was assigned to the USS California, and served as a junior officer in the gunnery department of that battleship until May 1933. A month later he joined the USS Crowninshield for gunnery duties, and had a years’ service in that destroyer. Ordered in June 1934 to the Rensselaer Polytechnic Institute, Troy, New York, for postgraduate instruction. He was awarded the degrees of Civil Engineer in 1936, and Master of Civil Engineering in 1937.

In June 1946 he was ordered to Guantanamo, Cuba, for duty as Pubic Works Officer of the Naval Operating Base, remaining in that assignment until July 1948. A month later he was designated Officer in Charge of the Public Works Center, Norfolk, Virginia, and served there until January 1951. Between February of that year and December 1953, he was District Public Works Officer, Eleventh Naval District, San Diego, California. When detached, he reported to the Naval Station, Newport, Rhode Island, where he currently serves as Public Works Officer.