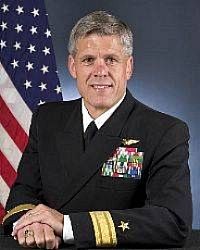 Rear Admiral Steve Voetsch is a 1979 graduate of the US Naval Academy. He was designated a naval flight officer in 1980.

His operational assignments include flying with VF-74 in the F-4 Phantom aboard USS Forrestal (CV 59) and then transitioning to the F-14 Tomcat aboard USS Saratoga (CV 60). Later, he was assigned to VF-143 aboard USS Dwight D. Eisenhower (CVN 69). He served in VF-41 aboard USS Theodore Roosevelt (CVN 71) as a department head, flying numerous combat missions over Iraq and Kuwait during Operations Desert Shield/Storm and Provide Comfort. He commanded VF-102 and his most recent operational assignment was as commander, Carrier Air Wing 1. He has logged over 4,800 flight hours, 360 in combat and has accumulated over 1,100 carrier-arrested landings.

Assignments to shore and staff billets include the Armed Forces Staff College and Assistant Washington placement officer at the Bureau of Naval Personnel. Voetsch was selected to serve as aide/flag lieutenant to the Chief of Naval Personnel, Admiral Ronald J. Zlatoper. He commanded VF-101, the F-14 Fleet Replacement Squadron, and completed a one-year National Security Affairs Fellowship at the Hoover Institute, Stanford University, in California. He served as executive assistant to Commander, US Space Command/North American Aerospace Defense Command through it’s transition to US Northern Command.

After promotion to flag rank, Voetsch served on the staff of Commander, US Pacific Fleet as the deputy chief of staff for Operations, Training and Readiness (N3N7), from July 2005 to May 2007. From May 2007 to January of 2009, Voetsch assumed command of Operational Test and Evaluation Force in Norfolk.