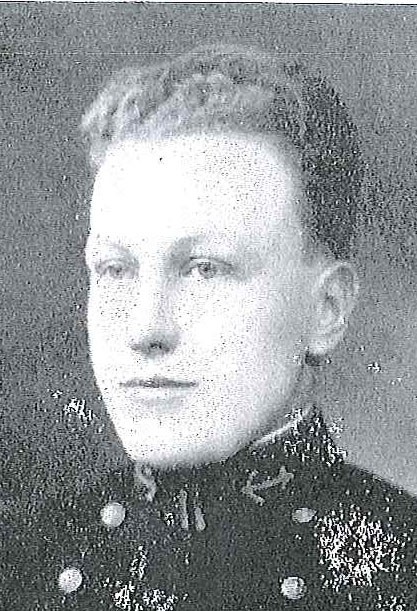 Stephen Morris Archer was born in Oak Hill, West Virginia, on July 18, 1911, son of the late Stephen Mills and ally Mae (Fitzgerald) Archer.  He attended Woodfield (Ohio) High School; Hyde Park High School, Chicago, Illinois; New Bremen (Ohio) High School and Ohio State University at Columbus, prior to his appointment to the US Naval Academy, Annapolis, Maryland, from the Fourth District of Ohio in 1928.  As a Midshipman he was on the A-Squad in wrestling; the B-Squad in football; was Assistant Athletic Editor of the “Log” and “Lucky Bag”, and was President of the Press Club.  Graduated and commissioned Ensign on June 2, 1932, he subsequently advanced in rank, attaining that of Captain, to date from January 1, 1951.

Following graduation from the Naval Academy in 1932, he joined USS Nevada, and while aboard that battleship coached the wrestling team which won the Fleet Championship in 1934 and 1935.  In December 1935, he was ordered to the Bethlehem Shipbuilding Corporation, Quincy, Massachusetts, to assist in the fitting out of the USS Quincy, and served in that heavy cruiser from her commissioning, June 9, 1936 until June 1938.  During that period, he coached the wrestling team from Quincy (1936-1938), which won the Scouting Force Championship in 1938, and was aboard in Spanish waters in the early months of the Spanish Revolution.

Detached from the Quincy in June 1948, he reported for instruction in ordnance at the Postgraduate School, Annapolis, Maryland.  While there in addition to being a student, he was Assistant Wrestling Coach at the Naval Academy and also coached Battalion football.  Following further study, June-October 1940, in the Bureau of Ordnance, Navy Department, Washington, DC, and at the American Embassy, London, England.  In that capacity, he was associated with the British Mine Warfare Forces, and was an observer aboard several English mine layers during the winter, 1940-1941.

Between June 1941 and April 1943, he had duty in connection with bomb disposal at the Mine Disposal School, Navy Yard, Washington, DC, and in the Office of the Chief of Naval Operations, Navy Department, Washington, DC.  In this assignment, he was ordered to the Fourteenth Naval District, Pearl Harbor, TH., where he remained from December 10, 1941, following the Japanese attack on the Naval Base at Pearl Harbor several days previous, until February 1942.  There he removed two torpedoes from a Japanese midget submarine, which was captured at Bellows Field, Oahu, TH, thus obtaining information of great value to our own forces, as well as those of our allies…”  For this duty in the Fourteenth Naval District, he received a Letter of Commendation with authorization to wear the Commendation Ribbon, from the Commander in Chief, US Pacific Fleet.

He reported in April 1943, as Gunnery Officer aboard USS Detroit, and while attached to that cruiser, saw action during the Aleutian Islands Campaign.  In July 1944, he joined the staff of the Commander in Chief, US Pacific Fleet, and “for meritorious service in connection with operations against enemy Japanese forces (in that assignment), from July 18, 1944 to September 1, 1945…” he was awarded the Bronze Star Medal.  The citation further states in part:  “As Fleet Ammunition Officer provided a continuous supply of ammunition and thereby contributed materially to the success of our forces in these areas…”

From October 1945 to August 1947, he served as Executive Officer of USS Topeka, and as such participated in the occupation of Japan and China, and was present in the Philippines when she received her independence.  During this period, he became a member of the Southern California Amateur Athletic Union.  In September 1947, he became Executive Officer of the Ordnance Engineering Department at the Postgraduate School, Annapolis, Maryland.  There, in his spare time he coached wrestling at the Severn School, Severna Park, Maryland, and managed the All Navy Wrestling Team, 1948-1949 (the National Champions, 1948).  He remained at Annapolis until July 1949, when he assumed command of USS Power, which operated in the waters of the Mediterranean and Northern Europe.  Detached from command of the Power in July 1950, he next commanded Mine Division FOUR, with temporary additional duty under Commander Task Force NINETY FIVE.  For outstanding services during the Korean hostilities, he was awarded, the Silver Star Medal and the Legion of Merit with Combat “V”.  The citations in part;

Silver Star Medal:  “For conspicuous gallantry and intrepidity in action as Commander Underwater Reconnaissance Element in support of naval forces conducting operations in heavily mined waters during the period 10-22 October 1950.  When USS Pledge and USS Pirate were mined on 12 October, he conducted rescue operations for surviving personnel with disregard for his own safety in the face of enemy gunfire from shore batteries.  The leadership, force and judgement displayed by Commander Archer in directing visual and sonar searches for mines throughout this period and in supervising underwater demolition operations in the vicinity of Koto and Rei-To islands, contributed directly to the successful clearance of mine channels and anchorages areas off Wonsan, Korea…”

Legion of Merit:  “For exceptionally meritorious service…as Commander Task Element NINETY FIVE POINT SIXTY NINE during sweeping of enemy laid mines in the approaches and harbor of Chinnampo, Korea, from 1 November to 22 November 1950…He expeditiously swept the channel in the short time of ten days without the loss of a man or ship, thereby opening the port for supplies badly needed by our ground forces…”

From September 1954 to September 1955, he was Chief of Staff to Commander Cruiser Division TWO, operating in the Caribbean, and from December 1955 to December 1957 served as US Naval Attache and US Naval Attache for Air, Athens, Greece.  He was then ordered to duty as Commanding Officer of USS Bryce Canyon (AD36), and under orders of October 29, 1958, he now serves as Commander Destroyer Flotilla FIVE.