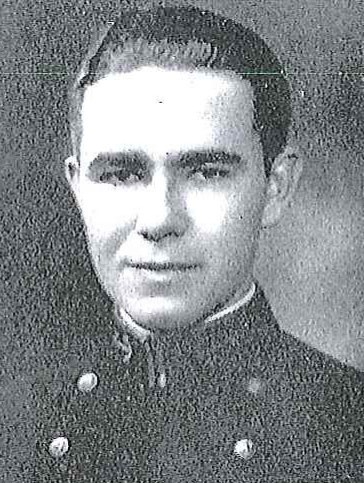 Commander Carter was born September 15, 1907, in Iatan, Missouri, the son of Francis F. carter and Mrs. Carter (nee Barnes). He attended high school in Centralia, Kansas, and prep school for one year in Leavenworth, Kansas, before his appointment to the US Naval Academy at Annapolis, Maryland, from Kansas in 1926. Graduated and commissioned Ensign on June 5, 1930, he advanced progressively in grade to the rank of Commander to date from December 30, 194. He served in the temporary grade of Captain from April 8, 1946 to December 1, 1947, at which time he reverted to his permanent rank of Commander.

After graduation from the Academy in 1930, Commander Carter was assigned to the battleship New Mexico until April 1931. Following instruction at the Naval Air Station, Pensacola, Florida, from May 1931 to February 1932, he proceeded to the New York Shipbuilding Corporation, Camden, New Jersey, for duty in connection with fitting out USS Indianapolis. Upon her commissioning on November 15, 1932, he reported aboard, and in July 1934, assumed duty as Aircraft Gunnery Observer. Detached from the Indianapolis in June 1935, he again had instruction at the Naval Air Station, Pensacola, Florida, until June 1936, after which he joined Fighting Squadron Six-B at the Naval Air Station, San Diego, California.

Between July 1937 and July 1939, Commander Carter was assigned to Fighting Squadron Three, and thereafter transferred to Patrol Squadron Thirty-Two. He had month’s tour of duty in USS Sandpiper during January and February 1940, and continued sea duty in the USS New Mexico until December 1943. Completing fitting out duty in USS Guam at the New York Shipbuilding Corporation, Camden, New Jersey, he reported aboard as First Lieutenant and Damage Control Officer upon her commissioning on September 17, 1944.

Detached from the Guam in May 1945, Commander Carter transferred to the battleship Mississippi as Executive Officer. From April 1946 to November 1947, he served as District Director of Naval Reserve Fourth Naval District, Philadelphia, Pennsylvania, after which he reported for duty in the Bureau of Naval Personnel, Navy Department, Washington, DC, where he is presently serving as Assistant Director of the Naval Reserve Division.