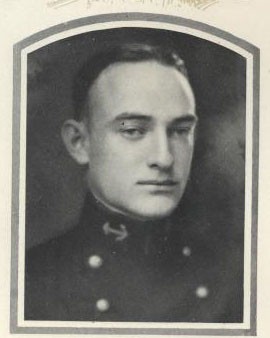 Murr Edward Arnold was born on 12 December 1900 in Shubonier, Illinois, son of Eli M. Arnold and Mary Holt Arnold. He attended the State Normal Schools of Durant, Oklahoma, and Albion, Idaho prior to his appointment to the US Naval Academy, Annapolis, Maryland, from Idaho in 1919. Graduated and commissioned Ensign on 4 June 1923, he subsequently advanced in rank to that of Rear Admiral to date from 1 July 1951.

Following graduation from the Naval Academy in 1923, he had two months' duty in the USS Argonne, before he joined the USS Huron operating in the Asiatic Fleet. In 1923, while attached to the Huron, he was present during the Yokohama earthquake, and participated in the attempt to recover American bodies from the ruins of the smoldering city. Detached from the Huron in May 1925, he transferred to the USS Smith Thompson, also on Asiatic Station, for three months' duty.

Returning to the United States in the summer of 1925, he reported in August of that year for flight instruction at the Naval Air Station, Pensacola, Florida, where he was designated Naval Aviator on 24 April 1926. He remained at the Pensacola Air Station until July of that year, when he joined Torpedo Bombing Squadron TWO based on the USS Langley, and served with that unit of Aircraft Squadrons, Battle Fleet, until January 1928. This was the Navy's first carrier based torpedo plane squadron, pioneering that type of plane as part of the Navy at sea.

He had temporary duty between January and July 1928 as Personnel Officer on the staff of Commander Aircraft, Battle Force, and returned to Aircraft Squadrons, Battle Fleet, to serve with Fighting Squadron TWO, from July 1928 to October 1929, during which period he participated in the National Air Races at Cleveland, Ohio. In December 1929 he joined patrol Squadron TWO, based at the Naval Air Station, Coco Solo, Canal Zone, and after serving there until May 1931 returned again to Aircraft Squadrons, Battle Fleet, for duty until October 1932 with Fighting Squadron One, based on the USS Saratoga. Known as the "Top Hat" Squadron, it was the first organized fighting squadron in the Navy.

Service with Utility Squadron ONE operating with Aircraft Base Force, between October 1932 and 5 April 1934, preceded a two year tour of duty in the Bureau of Aeronautics, Navy Department, Washington, DC, where he served in the Aviation procurement Division. In June 1936 he joined Scouting Squadron FIVE (later redesignated Cruiser Scouting Squadron TWO) aboard the cruiser Trenton. Following detachment from that squadron, he assumed command in July 1938 of the Naval Reserve Aviation Base, Detroit, Michigan, where he served until May 1940. For service in that command, during which time the base attained second place in competition with thirteen other Naval Reserve Aviation bases, he was commended by the Chief of the Bureau of Navigation (later redesignated Bureau of Naval Personnel).

He was detached from Detroit in May 1940, and subsequently reported to the USS Yorktown for duty as Commanding Officer of Bombing Squadron FIVE, based on that carrier. He later became the Yorktown's Air Officer, and as such participated in every major Naval engagement of the Pacific Fleet from January 1942 until that gallant carrier was sunk on 7 June 1942, as a result of enemy action during and subsequent to the Battle of Midway. He was awarded the Bronze Star Medal, with Combat "V," and the Silver Star Medal. The citations follow in part:

Bronze Star Medal: "For meritorious service as Air Officer of the USS Yorktown in action against enemy Japanese forces in the Solomon Islands area, May 4, 7, and 8, 1942. Skilled in supervising the servicing of aircraft on board, and in maintaining the flight deck and arming crews in readiness for receiving and rearming returning planes, (he) contributed materially to the success of the Yorktown's Air Groups at Tulagi on May 4, and during the fierce Battle of the Coral Sea, May 7-8...."

Silver Star Medal: "For conspicuous gallantry and courageous devotion to duty...in action against enemy Japanese forces in the Battle of Midway, June 4, 1942. Despite the hazardous and tremendous difficulties attendant upon the heavy bombing and torpedo attacks, he succeeded in keeping the flight deck and aircraft on board the Yorktown fully operative by his expert coordination and efficient supervision of the Air Department Activities..."

He also received a Letter of Commendation, with authorization to wear the Commendation Ribbon, from the Commander in Chief, US Pacific Fleet, for outstanding service at Salamaua and Lae on 10 March 1942.

Following the sinking of the Yorktown, he returned to the United States and served as Director of Personnel and Training, on the staff of Commander Fleet Air, West Coast, until 27 May 1944. "For exceptionally meritorious service..." in this assignment he was awarded the Legion of Merit. The citation continues in part:

"....Exercising sound judgment, (he) conceived, promoted and organized the method of administering officer and enlisted personnel of aeronautical organization assigned to Commander Fleet Air, West Coast, which entailed a drastic revision of peace time methods and resulted in a high degree of efficiency in the handling and distribution of such personnel. In addition, he directed the training activities of all squadrons and air groups forming and reforming on the West Coast, contributing materially to the excellent combat record of these squadrons."

Between July and October 1944 he participated in a special secret mission to China, entering the interior of that country by way of Africa and Burma. After a brief duty in the Office of the Chief of Naval Operations, Navy Department, during October 1944, he returned to the Pacific with Naval Group ONE HUNDRED AND NINETY SIX, and following service on the staff of the Commander in Chief, US Pacific Fleet, assumed command on 10 January 1945 of the USS Fanshaw Bay. He was entitled to the Ribbon for the Presidential Unit Citation awarded that carrier escort vessel, the citation following in part:

"...Operating continuously in the most advanced areas, the USS Fanshaw Bay and her air squadrons destroyed or damaged hostile warships, aircraft, merchant shipping and shore installations despite frequent and sustained air attacks. She sent out her planes repeatedly in spotting and strike missions to annihilate the enemy's ground installations, troops, tanks, trucks, and parked aircraft and to destroy his airborne planes. Operating as a highly disciplined and superbly coordinated team throughout 124 days of action, the Fanshaw Bay and her air groups achieved an illustrious record of performance in combat which reflects the highest credit upon her gallant officers and men and upon the United States Naval Service."

Detached from command of the Fanshaw Bay in September 1945, he was assigned the following month to the Bureau of Naval Personnel, Navy Department. He remained there until January 1948, after which he commanded the USS Princeton for more than a year. He again had duty in the Bureau of Naval Personnel from March 1949 to May 1951, serving as Assistant Chief of the Bureau, for Plans. Completing a tour of duty as Commanding Officer of the Naval Operating Base and Naval Air Station, Kwajalein, in October 1952, he next commanded Carrier Division FIFTEEN.

On 1 August 1953 he reported as Deputy Chief of the Bureau of Naval Personnel and Assistant Chief of that Bureau, and after three years' service in that dual capacity assumed command, on 4 September 1956 of Carrier Division FOUR. On 30 April 1958 he became Commander Fleet Air, Alameda, with headquarters at the Naval Air Station, Alameda, California. On 1 October 1959, he assumed additional duty as Commander Naval Air Bases, Twelfth Naval District, after serving temporarily as Commander Naval Air Force, Pacific Fleet.