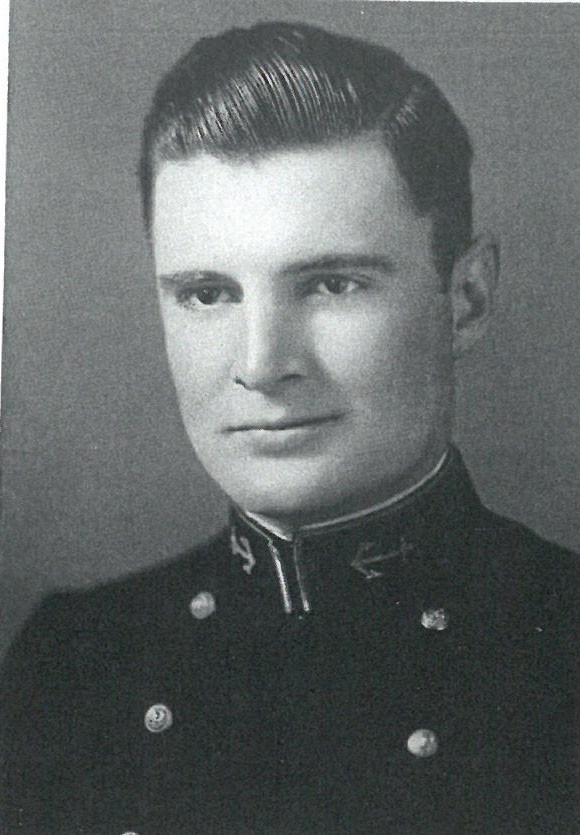 Robert Hugh Caldwell, Jr., was born in Atlanta, Georgia, on August 16, 1913 son of Robert Hugh and Susie Hardwick (Mills) Caldwell. He received his early education from Joseph E. Brown Junior High School, Boys High School and Georgia Institute of Technology, all in Atlanta. Enlisting in the US Naval Reserve on November 2, 1931, he was honorably discharged on July 31, 1932 to accept an appointment to the US Naval Academy, Annapolis, Maryland. He was graduated and commissioned Ensign on June 4, 1936, and through subsequent promotions, attained the rank of Captain, to date from June 1, 1955.

Following graduation from the Naval Academy in June 1936, he had sea duty until December 1938, serving first in USS Tennessee, flagship of Battleship Division 2, Battle Force, and the last six months of that period in USS Melville, tender for Destroyer Flotilla 2, Battle Force. In January 1939 he reported to the Submarine School, New London, Connecticut, where he completed instruction in submarines in June of that year. He was then assigned to USS S-47, a unit of Submarine Squadron 3, Atlantic Fleet, and was aboard that submarine, after the United States entered World War II in December 1941 until September 1942, participating in the capture and defense of Guadalcanal and the Biak Island operation.

He was awarded the Bronze Star Medal with Combat “V,” for “heroic service as Assistant Approach Officer of USS S-47, in action against enemy Japanese forces in the Pacific War Area during her Third War Patrol, from August 25 to September 22, 1942…” commanding officer conducting successful attacks which resulted in the sinking of an enemy cruiser of 7,000 tons… and contributed directly to the success of his vessel in evading severe hostile countermeasures…”

From September 1942 until March 1944 he commanded USS S-45. During that period the S-45 received the major yard overhaul and made her Fifth and Sixth War Patrols in the Pacific under his command. The next three months were spent on board the USS Sandlance, on one war patrol, during which five ships were sunk. In July 1944 he assumed command of USS Peto. He was awarded the Navy Cross and the Silver Star Medal with citations which follow in part:

Navy Cross: “For extraordinary heroism as Commanding Officer of the USS Peto, during the Seventh War Patrol of that vessel in enemy Japanese controlled waters in the Pacific Ocean Area, from October 23 to December 6, 1944…( He) penetrated strong enemy escort screens to launch repeated strikes against enemy shipping and…contributed materially to the success of the Peto in sinking more than 28,000 tons of enemy shipping and in evading severe hostile countermeasures…”

Silver Star Medal: “For conspicuous gallantry and intrepidity in action as Commanding Officer of USS Peto during the Tenth War Patrol of that vessel in the enemy Japanese-controlled waters near the south and east coasts of Honshu from July 14 to August 30, 1945. Patrolling on lifeguard duty, Commander Caldwell saved twelve downed aviators in four separate rescues. After a spectacular run through shallow, mined waters while being subjected to an accurate shelling from coastal batteries, he reached a downed aviator, scooped him up, and made good his escape. On another occasion when a hostile plane made a suicide run on the Peto, (he) maneuvered his ship skillfully to evade the plane until it was shot down by Allied air cover within 300 yards of the submarine…”

Returning to the United States in August 1950, he had a two year tour of duty in the Office of the Chief of Naval Operations, Navy Department, Washington, DC. In September 1952 he reported for duty with Allied Naval Forces, Southern Europe, and from 1954 to 1956 had command of USS Taluga (AO-62). He was a student at George Washington University, Washington, DC, 1956-1957, and on March 12,1957, was ordered to the Caribbean Sea Frontier as Inspector General/Member Puerto Rico area, Joint Committee.