[no date of birth or death date] 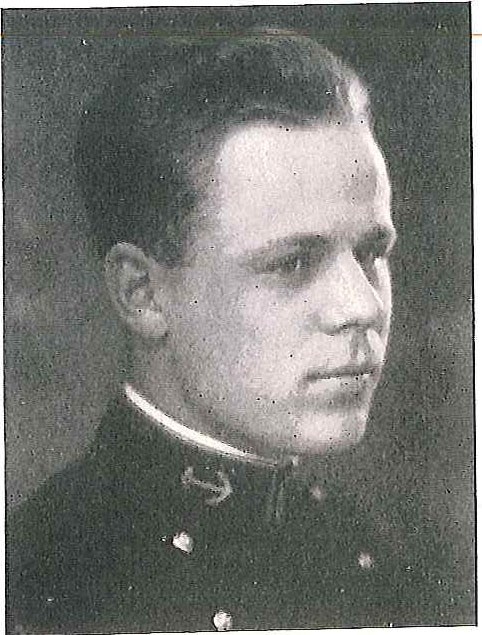 Fremont Baldwin Eggers was born in Newark, New Jersey, son of Augustus F. and Mary Boylan Eggers. He attended the Montclair (N.J.) Academy and Lawrenceville School before entering the United States Naval Academy, Annapolis, Maryland, by appointment in June, 1921. Graduated with the Class of 1925, he was commissioned Ensign on June 4, 1925 and subsequently progressed in grade to the rank of Captain to date from July 20, 1943.

For the first two years after graduation, he served in USS Utah and USS Florida, battleships of the Scouting Fleet. After instruction in submarines at the Submarine Base, New London, Connecticut, he was ordered to the Asiatic Station, and had duty consecutively in the S-35 and S-36, and qualified to command submarines in 1930. Returning to the United States, he was assigned to the Eagle #58 for two years, 1930-1932, as Engineer and Sound Officer in experimental sound duty on the East Coast. He was commended by letter  from the Secretary of the Navy for winning the Engineering trophy the year 1931-1932 for the patrol boat class.

Ordered to the Third Naval District, New York, New York, he was Assistant Personnel and Material Officer for two years, and in 1934 he was named Executive Officer of USS Dahlgreen, flagship of Destroyer Division 16, Battle Force, US Fleet. In the summer of 1937 he was detached from the Dahlgren, and had shore duty at the Naval Gun Factory, Washington, DC, attached to the Metallurgical and Testing Division.

From May, 1939 to December 1943 he was Gunnery and Damage Control officer aboard USS Saratoga, flagship of Carrier Division 1 at first, and later task force flagship attached to the Third Fleet in the Pacific war area during the principal engagement and amphibious operations of 1942 and 1943 to and including the invasion of the Gilberts. Although receiving several battle scars herself, at one time during this period the Saratoga was the only serviceable carrier we had left in the Pacific.

When ordered detached from the Saratoga, he reported to the Navy Department, Washington, DC and served in the Bureau of Naval Personnel from January 1944 to February, 1945. After a brief period attached to the Central Commissioning Detail, East Coast, Brooklyn, New York, in June, 1945 he assumed command of USS Vermilion, attack cargo vessel. Following her shakedown cruise in July, she joined the Atlantic Fleet, since hostilities in the Pacific war were about to cease.

Relieved of that command in June, 1947, he was ordered to the Naval War College, Newport, Rhode Island, for the senior course, and a year later he returned to Brooklyn, New York, as Commanding Officer of the branch office of Naval Research, for a two year tour. In July, 1950 he again had orders to sea duty, as Commanding Officer of USS General J.C. Breckinridge, transport, operating with the Military Sea Transportation Service, his present assignment.