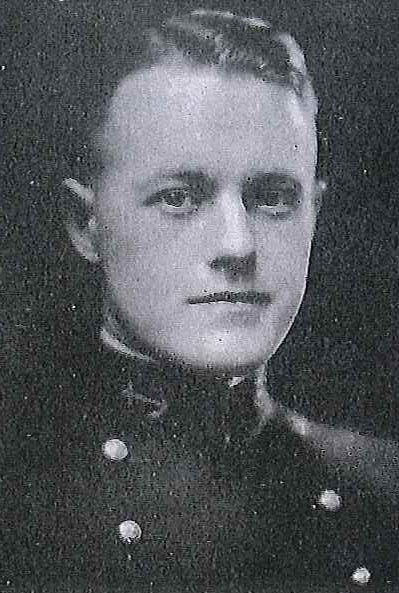 Frederick John Eckhoff was born in Brooklyn, New York, on July 16, 1898, son of August W. and Rose Elizabeth (Boyce) Eckhoff. He attended Manual Training High School and the College of the City of New York before entering the US Naval Academy, Annapolis, Maryland, from the Sixth New York District on August 22, 1918. Graduated and commissioned Ensign on June 3, 1922, he progressed through subsequent promotions, to the rank of Captain, his date of rank April 1, 1943. He was transferred to the Retired List of the Navy on June 30, 1952.

Following graduation from the Naval Academy in 1922, he was assigned to Destroyer Squadrons, Atlantic Fleet, for a year's service in USS Bruce. He had a torpedo instruction at the Naval Torpedo Station, Newport, Rhode Island, from July to December 1923 and for eighteen months thereafter had further destroyer duty in USS Coghlan. Instruction in submarines aboard USS Chewink at the Submarine Base, New London, Connecticut, preceded successive service from January 1926 to December 1929 in the submarines S-3, 0-3, and S-8.

A tour of shore duty at the Navy Yard, Philadelphia, Pennsylvania, was followed by duty afloat from June 18 to August 17, 1932, as Executive Officer of USS Fairfax and from August 23, 1932 to June 29, 1935, in command of USS Ortolan, tender for Submarine Division 12, Submarine Force. He returned to the Submarine Base at New London, and after a year's service there, reported in June 1937 as Communication Officer of USS Arizona. Detached from the latter in December 1938, he commanded USS Zane until July 1940, in the Pacific.

From August 1940 until November 1941 he served at the Navy Recruiting Bureau, New York, New York, after which he joined USS California as Navigator. That battleship was sunk during the Japanese attack on the U.S. Fleet at Pearl Harbor, on December 7, 1941, and on February 10, 1943, he reported as Navigator of USS Maryland, repaired from the battle damage at Pearl Harbor, and served as such throughout the early period of the war in amphibious operations in the Pacific.

He was detached from the Maryland on December 22, 1943, upon reaching the Twelfth Naval District (San Francisco, California). On February 2, 1944, he assumed command of USS American Legion, commanding that troop transport until December of that year. On January 3, 1945, he joined the staff of Commander Amphibious Group Nine, as Chief of Staff and Aide, and served in that capacity throughout the remainder of the war, and until December 1945.

"For meritorious achievement…..during operations against enemy Japanese forces from January 3 to July 15, 1945…." he was awarded the Bronze Star Medal with Combat "V." The citation states that he "effectively supervised the planning and execution of the landing at Zambales, Bataan-Corregidor, Panay, Negros and Macajalar Bay…." and that his "professional ability and outstanding performance of an important duty were contributing factors in the success of these operations…."

In January 1946 he reported to the bureau of Ordnance, Navy Department, Washington, DC, where he served as Assistant Director of the Shore Establishments Division for ten months. From November 1946 until May 1948 he was President of the General Court Martial, Twelfth Naval District, with Headquarters in San Francisco, California. His last duty assignment prior to his retirement on June 30, 1952, was that of Commanding Officer of the Naval Magazine, Port. Chicago, California.

In addition to the Bronze Star Medal with Combat "V," Captain Eckhoff has the Victory Medal (USNA); the American Defense Service Medal, Fleet Clasp; the Asiatic-Pacific Campaign Medal with three engagement stars; the Philippine Liberation Ribbon with one star; and the World War II Victory Medal