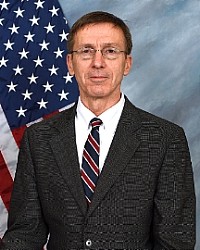 Prior to his appointment to ASN (RDA), Mr. Stackley served as a professional staff member of the Senate Armed Services Committee. During his tenure with the Committee, he was responsible for overseeing Navy and Marine Corps programs, US Transportation Command matters and related policy for the Seapower Subcommittee. He also advised on Navy and Marine Corps operations & maintenance, science & technology and acquisition policy.

Mr. Stackley began his career as a Navy surface warfare officer, serving in engineering and combat systems assignments aboard USS John Young (DD 973). Upon completing his warfare qualifications, he was designated as an engineering duty officer and served in a series of industrial, fleet, program office and headquarters assignments in ship design and construction, maintenance, logistics and acquisition policy.

From 2001 to 2005, Mr. Stackley served as the Navy’s LPD 17 program manager, with responsibility for all aspects of procurement for this major ship program. Having served earlier in his career as production officer for the USS Arleigh Burke (DDG 51) and project Naval architect overseeing structural design for the Canadian Patrol Frigate, HMCS Halifax (FFH 330), he had the unique experience of having performed a principal role in the design, construction, test and delivery of three first-of-class warships.

Mr. Stackley was commissioned and graduated with distinction from the United States Naval Academy in 1979, with a Bachelor of Science in Mechanical Engineering. He holds the degrees of Ocean Engineer and Master of Science, Mechanical Engineering from the Massachusetts Institute of Technology. Mr. Stackley earned certification as professional engineer, Commonwealth of Virginia, in 1994.

[Stackley served thru 3 August 2017 when Richard V. Spencer was sworn in as the 76th Secretary of the Navy.]