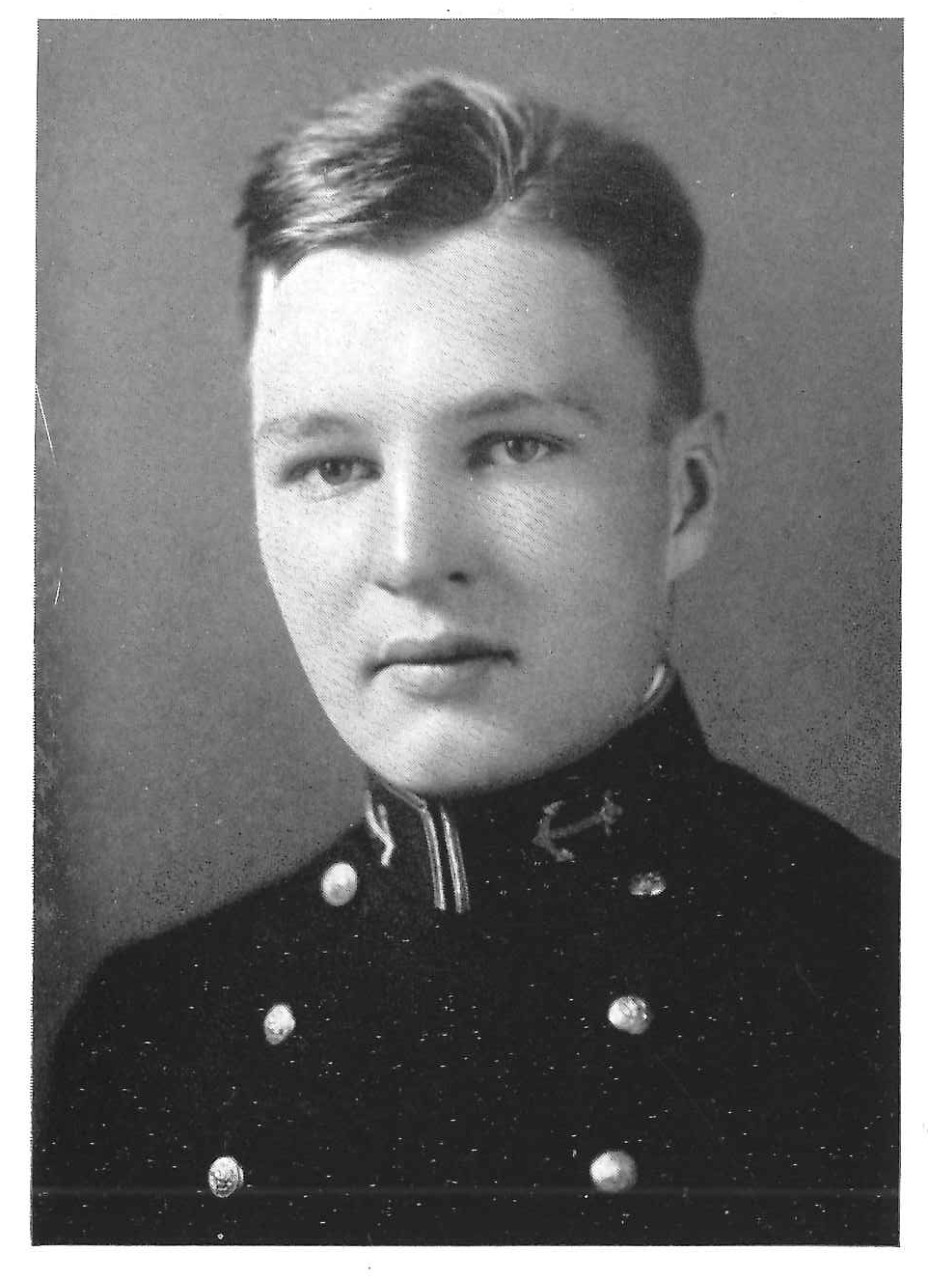 James Hills Barnard, II, was born in Webster, New York, on February 21, 1914, son of James R. and Kathleen (Hawley) Barnard.  He attended Webster High School before his appointment to the United States Naval Academy, Annapolis, Maryland, from New York in 1932.  As a Midshipman he participated in interclass football, tennis, and lacrosse.  Graduated and commissioned Ensign on June 4, 1936, he subsequently progressed in grade, attaining the rank of Captain, to date from February 1, 1955.

After graduation from the Naval Academy in June 1936, he served for four years in the gunnery department of the USS Trenton, a unit of the Pacific Fleet, and later of Squadron 40-T in Europe.  The Trenton was in French waters when Germany invaded Poland.  Upon his return to the United States, he reported to the Submarine School, New London, Connecticut, for submarine instruction.  He completed the course and joined the USS Tautog, and was serving aboard that submarine at Pearl Harbor, T.H., when the Japanese attached the Fleet there on December 7, 1941.

The Tautog departed for her First War Patron on December 26, participated in the Marshall Islands Raid, and, after being transferred to the Southwest Pacific in May 1942, operated out of Perth, Australia.  He made five war patrols in that submarine, and “For gallantry and intrepidity in action as Officer of the Deck on board the USS Tautog during a war patrol in enemy Japanese waters on April 26, 1942,…” he was awarded the Silver Star Medal.  The citation further states: “Avoiding the fire of an enemy submarine through skillful and speedy maneuvering, Lieutenant Barnard, within a space of seconds, assumed the offensive, launching his attack with such force and accuracy that the enemy craft was probably destroyed…”

The Tautog received the Navy Unit Commendation “For outstanding heroism in action against Japanese combatant and merchant shipping during the Second, Fifth, Sixth, Eighth, Ninth, and Eleventh War Patrols in enemy-controlled waters of the Pacific…” which is concluded with, “Although repeatedly depth-charged and pursued for long periods, the TAUTOG has achieved an illustrious combat record attesting the valor and superb seamanship of her ship’s company and reflecting the highest credit upon the US Naval Service.”

Returning to the United States in April 1943, he served from July of that year to December 1944 as an Instructor in Torpedoes and Fire Control at the Submarine School, New London.  He received a Letter of Commendation, with Ribbon, from the Commander in Chief, Atlantic Fleet, for “meritorious conduct (in that assignment) from July 1943 until September 1944, and as Head of the Torpedo Department of the Submarine School from October 1944 to December 1944…”  The citation states that “His constructive supervision of the Command Class students contributed materially to their subsequent combat successes in the Pacific……”

In January 1945 he reported to Commander Submarines, Pacific Fleet, and made one war patrol in the USS Tench before his return to the United States in July of that year.  He next had a tour of duty as Head of the Underwater Ordnance, Fire Control Section, Research and Development Division in the Bureau of Ordnance, Navy Department and in June 1949 was ordered detached to serve on the staff of Commander Submarine Squadron ONE as Gunner Officer and PCO Instructor.  In March 1951 he was transferred to the staff of Commander Submarines, Pacific Fleet and had similar duty for five months.

In August 1951 he assumed command of the USS Radford, which spent seven months in the Korean combat area and in September 1952….He applied the striking power of his ship against the enemy with maximum effectiveness while participating with the Screen Group of Task Force 77 and the Carrier Element of Task Group 95.1, conducting air and surface operations, bombardment missions and night patrol and harassing missions, thereby inflicting widespread damage on the enemy.  While participating with the Hunter Killer Group in the Formosan Straits, he developed and evaluated several novel and highly successful anti-submarine tactics and countermeasures…”

Detached from command of the Radford in October 1953 he next served as Industrial and Torpedo Officer at the Naval Torpedo Station, Keyport, Washington and in August 1955 became Availabilities Coordinator in the Fleet Development and Maintenance Division, Office of the Chief of Naval Operations, Navy Department.  In March 1957 he was ordered to the Eleventh Naval District, with headquarters in San Diego, California, for temporary duty awaiting retirement, and on June 1, that year was transferred to the Retired List of the US Navy.  He was advanced to the rank of Rear Admiral on the basis of combat awards.