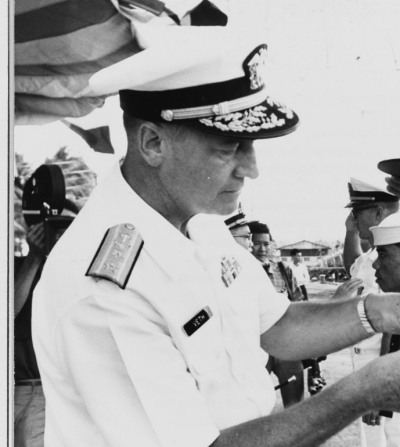 Kenneth LeRoy Veth was born in Minot, North Dakota, on 29 September 1911, son of Fred J. and Lulu L. (Meyers) Veth. He attended Minot High School and Minot State Teachers College for two years, prior to entering the US Naval Academy, Annapolis, Maryland, on appointment from his native state in 1931. As a Midshipman he won his N with stars in lacrosse, his NA in football and served on the Staffs of the “Lucky Bag, “the Trident,” and “Reef Points.” Graduated and commissioned Ensign on 6 June 1935, he subsequently advanced in rank, attaining that of Rear Admiral to date from 1 July 1961.

Following graduation from the Naval Academy in 1935, he reported on board USS Pennsylvania, flagship of the Commander in Chief, United States Fleet. In June 1937 he joined the Staff of Commander Battleship Division TWO as Assistant Communications Officer and from September 1938 until June 1940 had duty as Gunnery Officer of the cruiser Phoenix. He transferred to the minelayer Ramsey and serve as her Mining Officer until April 1941.

On duty as Assistant US Naval Attaché at the American Embassy, London, England when the United States entered World War II, 8 December 1941, he remained there until June 1942. After an assignment in connection with mine warfare in the Office of the Chief of Naval Operations and the Bureau of Ordnance, Navy Department, Washington, DC, he reported in April 1943 as Assistant Gunnery Officer on the Staff of Commander SEVENTH Fleet. “For exceptionally meritorious conduct…as Mine Warfare Officer…during operations against enemy Japanese forces in the Pacific War Area from May 27 to November 4, 1943…” he was awarded the Legion of Merit with Combat “V.” The citation further states in part:

“Organizing and executing the offensive mining campaign in the Southwest Pacific Area, (he) was largely responsible for the consideration of a large scale aerial mining blockade of Japan during the closing months of the war. In addition, he prepared the mining plan which was used as a basis for submarine offensive mining operations in the Southwest Pacific subsequent to October 1943…”

In November 1943 he joined the Staff of Admiral Lord Louis Moutbatten, RN, Supreme Allied Commander, Southwest Asia to serve as Intelligence and Air Liaison Officer. In Indo-China, he worked with the United States Air Force planning and executing aerial mining operations against the Japanese and in August 1944 participated in the first B-29 mining mission and longest nonstop bomber flight of the war in Palumbang Sumatra. He was awarded an Oak Leaf Cluster in lieu of a second Legion of Merit, the Bronze Star Medal and the Air Medal by the War Department. The citations follow:

Legion of Merit (Army): “For exceptionally meritorious service during the period December 1, 1943 to January 30, 1945…Through his keen sense of judgement, his devotion to duty and his exceptional enthusiasm,…Commander Veth assumed the major responsibility for the planning and execution of the aerial mine warfare campaign in this theater as well as for the dissemination of information and preparation of reports connected thereto…”

Bronze Star Medal (Army):  “For meritorious achievement in connection with operations against the enemy during the period November1, 1944 to November 30, 1944.”

Between June 1945 and October 1947 he had duty in connection with mine warfare in the Office of the Chief of Naval Operations, Navy Department, after which he had service afloat as Operations Officer on board USS Little Rock. Detached from that cruiser in April 1949, he next had command of USS Everett F. Larson. In August 1950 he was assigned to the office of the Joint Chiefs of Staff, Washington, DC, where he remained until August 1952 and after instruction in strategy and tactics at the Naval War College, Newport, Rhode Island, reported in August 1953 as Commander Mine Division TWO, his pennant in USS Shannon.

He was Commanding Officer of USS Monongahela from July 1954 until June 1955, after which he was assigned to the National Security Agency, Washington, DC. In May 1958 he joined the Staff of Commander Carrier Division TWENTY and in May 1959 reported for fitting out duty in USS Providence, which was converted to a guided missile cruiser at the Naval Shipyard, Boston, Massachusetts. He assumed command of that vessel upon her re-commissioning, 17 September 1959. From September 1960 to September 1961 he was commander Destroyer Flotilla SEVEN, after which he served as Commander Mine Force, Pacific, with additional duty as Commander Naval Base, Los Angeles, Long Beach, California.

On 26 March 1964 he assumed command of Anti-Submarine Warfare Group THREE and on 30 June 1965 became Chief of Legislative Affairs, Navy Department. In April 1967 he reported as Commander US Naval Forces, Vietnam, with additional duty as Chief of the US Naval Advisory Group, United States Military Assistant Command, Vietnam. “For exceptionally meritorious service…during operations against communist insurgency in the Republic of Vietnam from April to December 1967…” he was awarded the Distinguished Service Medal. The citation further states in part:

“…(He) contributed to the development of plans and operations of great significance to the defense of the Republic of Vietnam. His coastal surveillance and river patrol forces have resulted in massive interdiction of the infiltration of enemy supplies from the sea and have exerted unrelenting pressure on enemy lines of communication of internal waterways of South Vietnam…”

In November 1968 he reported as Commandant of the Fourth Naval District, with headquarters in Philadelphia, Pennsylvania. He was awarded a Gold star in lieu of Third Legion of Merit and cited in part as follows: “…Upon assuming his duties, he initiated a concentrated program for improving the Navy in the Fourth Naval District. Great strides were made in this area as a result of his outstanding leadership, personal interest and participation in numerous public and civic affairs…”

On 1 January 1973 he was transferred to the Retired List of the US Navy.