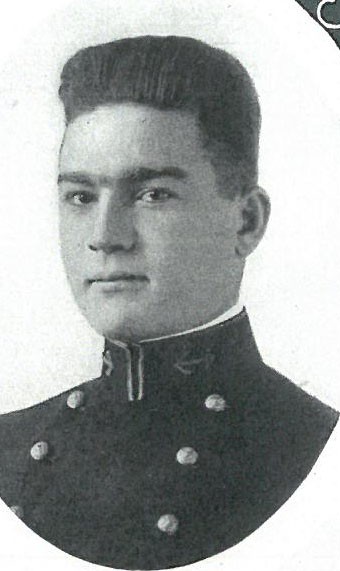 Felix Locke Baker was born in Homestead, Oklahoma, on January 7, 1898, the son of Mr. Ed Baker and Mrs. Lula Belle Locke Baker. He attended grade and high school in Watonga, Oklahoma, before entering the Naval Academy, Annapolis, Maryland, from the Sixth Oklahoma District in 1918. During World War I he had service as a midshipman in USS Utah, USS Rhode Island, and USS New Hampshire. Graduated and commissioned Ensign on June 6, 1919 with the Class of 1920, he advanced through the various grades to the rank of Captain to date from June 18, 1942. He was transferred to the Retired List of the Navy in the rank of Rear Admiral on the basis of combat citations, effective June 30, 1949.

Following graduation, he was assigned duty in USS DeKalb, then on transport duty between Newport News, Virginia, and European ports. In December, 1919 he was transferred to USS Pennsylvania. Two year later he was ordered to duty with Destroyer Squadrons, Pacific Fleet, serving successively in USS Crosby, USS Palmer, and USS Young. He was serving in the USS Young when she and six other destroyers were grounded and wrecked off Point Honda, California on September 8, 1923. With the surviving crew members from the Young, he reported, on September 24, to the Destroyer Base, San Diego California, in connection with fitting out and recommissioning USS Henshaw, and served aboard that destroyer from September 27, 1923 until February, 1924.

Ordered to the Naval Air Station, Pensacola, Florida, for flight training, he was designated Naval Aviator on August 15, 1924. In November of that year, he had duty with Aircraft Squadrons, Battle Fleet, and was assigned to Fighting Squadron ONE. Attached to the old carrier, USS Langley, he participated in the early development of dive bombing operations. Returning to the Naval Air Station, Pensacola, in December, 1926, for a tour of duty, he flew for several weeks with relief forces during the Mississippi River floods of the spring of 1927. As a flight instructor at Pensacola, he taught Fleet Admiral King, Rear Admiral A. B. Cook, among other most prominent Naval Aviators.

In November, 1929, he was assigned to Fighting Squadron TWO attached to the USS Langley, later to USS Lexington. From July, 1932 until June, 1934, he was Commanding Officer of the Naval Reserve Aviation Base, Squantum, Massachusetts, and during both years of his command, Squantum took first place in competition, being adjudged the most efficient of all the Navy Reserve Bases in the United States. He served as test pilot for members of Harvard Medical School and the Navy, who were investigating the physical effects of sharp pull-outs and extended accelerations.

In July, 1934 he assumed command of USS Pelican, seaplane tender, at Honolulu, Hawaii, and in November, 1935, he took command of Patrol Squadron ONE, based at Pearl Harbor. After a three year tour of duty in the Bureau of Aeronautics, Navy Department, Washington, DC, he returned to sea duty in USS Barnegat as Commanding Officer, and served from August, 1940 until July, 1942. He assumed command of Patrol Wing Seven, and in January, 1943, was assigned to additional duty on the staff of Commander Task Force TWENTY-FOUR. He transferred in July, 1943 to headquarters of Commander Eastern Sea Frontier and was assigned duty as Commander of Fleet Air Wing NINE, with additional duty as Air Officer, Eastern Sea Frontier, Norfolk, Virginia. During this period, his command consisted of more than twenty squadrons, and was engaged in anti-submarine warfare.

Detached from that duty in June, 1944, he had orders to report to Newport News Shipbuilding and Dry Dock Company, Newport News, Virginia, in connection with the fitting out of USS Randolph, and assumed command of that carrier upon her commissioning, October 9, 1944. His ship set a record for heavy carriers getting into action, as three months-plus a week later she was in action in support of the assault on Iwo Jima. He was awarded the Bronze Star Medal “For distinguishing himself by meritorious service in connection with operations against the enemy during the period 17 April, 1945 to 28 May, 1945, while serving as Commanding Officer of a United States aircraft carrier. He developed his ship and its embarked air group into an efficient fighting team, thereby rendering a valuable contribution to the success of our operations…”

At Guam in June, 1945, he was the first to use “Operation Pinwheel,” the Navy’s ingenious method of maneuvering giant aircraft carriers by the use of planes secured to their flight docks. Since that time, this pivoting maneuver has been used in occasional emergency situations, and may find a permanent use as an auxiliary to, and in some cases substitute for, harbor tugs.

When relieved of command of the Randolph on July 26, 1945, he next reported for duty in the Office of Deputy Chief of Naval Operations (Air), Navy Department, where he served as Chief of the Flight Section. He had orders in June, 1948 to duty as Bureau of Aeronautics representative at McDonnel Aircraft Corporation of St. Louis, Missouri, and was so serving when relieved of all active duty pending his retirement, June 30, 1949.