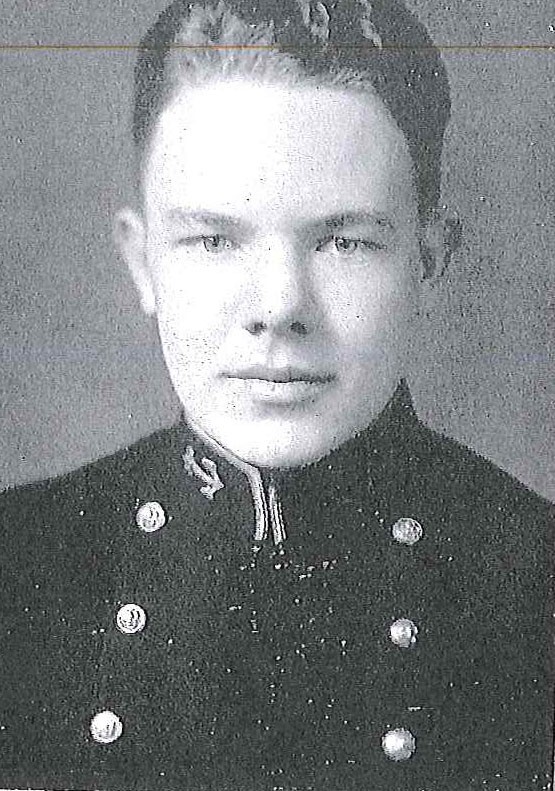 Ralph Arnold Embree was born in Kemmerer, Wyoming, on September 25, 1914, son of Royal Howard and Mary Wallace (Scott) Embree. He was killed in enemy action in the Pacific War Area, presumptive date of death, May 13, 1946.

Graduated from Kemmere High School in 1931, he entered the US Naval Academy, Annapolis, Maryland, on June 20, 1932, from Wyoming (at large). As a Midshipman he won his N* on the Gym Team for tumbling, was USNA sailing champion in the summer of 1935, and was awarded medals for Expert Rifleman and Expert Pistol Shot. Graduated and commissioned Ensign on June 4, 1936, he subsequently advanced to the rank of Commander, to date from March 15, 1944.

Upon graduation from the Naval Academty in 1936, he was assigned first to USS Mississippi, in which he served as a Junior Officer (turrett, engineering, snd commations). From May 1938 to January 1939 he served in USS Chandler as Assistant First Lieutenant, and later Assistant Gunnery Officer. On November 25, 1939 he reported to the Naval Air Station, Pensacola, Florida, for instruction eavier-than-air craft. He completed flight training, was designated Naval Aviator on February 7, 1940, and was ordered to Bombing Squadron Four, based on USS Ranger. On March 15, 1941 he was transferred to Scouting Squadron 41, slso of the Ranger, in which he was serving at the outbreak of the war.

He was awarded the Navy Cross 'For extraordinary heroism as Acting Squadron Commander of Scouting Squadron FORTY ONE, attached to USS Ranger during the occupation of French Morocco, November 8-11, 1942. . ." The citation continues: "Leading five flights of planes in vigorous dive-bombing rids against hostile warships and coastal defense batteries, Lieutenant Embree, courageously pressing home his attacks in the face of tremendous anit-aircraft fire and fierce fighters opposition, aided greatly in the infliction of severe damage upon the enemy . . . (and) contributed materially to the reduction of hostile resistance in the area and to the successful accomplishment of vital objectives preliminary to invasion."

On July 13, 1944, he reported to the Fleet Air Detachment, Naval Air Station, Astoria, Oregon, for duty in command of Bombing Squadron 12, and on July 20 assumed command of that squadron. He was reported Missing in Action as of May 12, 1945, when the plane in which he was flying, a unit of Bombing Squadron 12, was hit by enemy anti-aircraft fire and he was forced to parachute over enemy held territory on Okinawa Jima, Nansoi Shoto. Death is presumed to have occured a year and a day later.

Silver Star Medal: "For conspicuous gallantry and intropidity as Commanding Officer of Bombing Squadron TWELVE attached to USS Randolph, in action against enemy Japanese forces in the vinity of Tokyo, Japan, on February 16 and 17, 1945. Participating in the first attack by carrier based aircraft on the Tokyo area, (he) courageously led his squadron in coordinated bombing attacks on two important aircraft plant and...personally scored direct bomb hits and inflicted extensive damage on the targets..."

Air Medal: "For meritorious achievement in aerial flight as Pilot of a Fighter Plane in Air Group TWELVE...near the Japanese Empire and adjacent Islands chains, from February 16, 1945 to March 23, 1945... (He) led his plane with determined aggressiveness to inflict the maximum damage on the enmy..."

The Second, Third, and Fourth Air Medals were awarded for aerial flight "from March 24, 1945 to April 17, 1945..." respectively, during which periods he contributed to the success of our air operations in the Pacific Area by 'carrying out numerous rigorous strikes against hostile shipping, airfields and installations..."

Distinguished Flying Cross: "For heroism and extraordinary achievement in aerial flight as Pilot of a Fighter Plane in Air Group TWELVE...from April 28, 1945 to May 4, 1945...(He) pressed home his relentless attacks with determined aggressiveness and skillfully inflicted the maximum damage on the enemy...(contributing) to the success of our operations in the Pacific Area..."