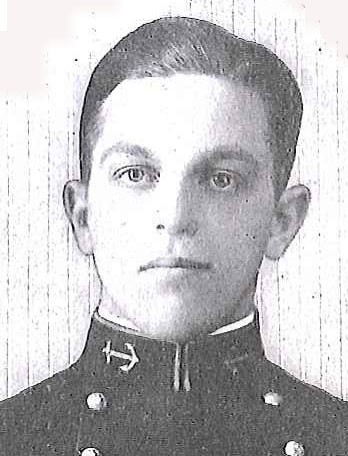 Herbert Keeney Fenn was born in Chicago, Illinois, on September 16, 1890, son of Charles William and Emily Augusta (Small) Fenn. He was graduated from Portland, Maine, High School, and attended the University of Marine for a year before his appointment to the US Naval Academy, Annapolis, Maryland. Entering as Midshipman from Maine, on June 29, 1909, he was graduated and commissioned Ensign on June 7, 1913, and through subsequent promotions attained the rank of Captain, to date from January 1, 194. He was transferred to the Retired List of the Navy on December 1, 1946.

After graduation from the Naval Academy in 1913, he was assigned first to USS Nebraska, and participated in the Mexican Campaign in that battleship. In 1914 he transferred to USS Virginia, flagship of Commander Third Division, U.S. Atlantic Fleet. From Mach to October 1916, he served as Naval Censor at the Radio Station, Siaaconsett, Massachusetts. From November of that year until April 1917, when the United States entered World War I, he was in charge of the Hydrographic Survey off Guam. He then joined USS Helena on Asiatic Station, and later in that year had command of USS Pampanga.

In 1918 he had submarine instruction aboard USS Monadnock, later commanding the First Submarine Division and the Monadnock. From June 1918 to June 1919, he served as Philippine Communication Superintendent and Commanding Officer of the Radio Station, Cavite, Philippine Islands. Returning to the United States, he attended the course in Radio Engineering at the Postgraduate School, Annapolis, in 1919-1920, and received the degree of Master of Science from Howard University, Cambridge, Massachusetts, in 1921. After period of practical instruction at Westinghouse Electric Manufacturing Company, Pittsburgh, Pennsylvania, and General Electric Company, Schenectady, New York, he was again assigned duty afloat.

In 1924 he was sent to Tokyo, Japan, on special duty in connection with the inspection of Japanese Naval Radio Station there. Upon his return to the United States, he reported to the Navy Department, Washington, DC, where he served for two years in the Bureau of Engineering, Radio Division. From 1926 to 1929 he was attached to USS Wyoming, while serving as Aide and Fleet Radio Officer on the Staff of Commander, Scouting Fleet. The next two year he spent at the Naval War College, Newport, Rhode Island, first as a student, later as a member of the staff.

From 1931 to 1934 he had sea duty in command successively, of USS Tarbell, USS Barry, and USS Herbert, all destroyers of the Scouting Force. In 1934 he again returned to the Naval Academy, this time for duty in the Executive Department of the Postgraduate School. Detached in 1937, he joined USS Trenton as Executive Officer, and after two years sea duty, reported on June 30, 1939 to the Office of the Chief of Naval Operations, Navy Department. When the United States entered World War II he was serving as Assistant Director of the Censorship Operating Board and as Chief Cable Censor. He was awarded the Legion of Merit, with citation that follows:

“For exceptionally meritorious conduct… as Assistant Director of Censorship and Chief Cable Censor in the Office of Censorship, Washington, D.C., from September 1940 to August 1945… Captain Fenn was in large measure responsible for the administrative development of this vital unit and for putting it into operation within a few hours after the outbreak of war with Japan. Maintaining daily radio and cable censorship throughout this prolonged period, he rendered distinguished service in supplying information of the greatest importance to the United States Navy in the successful prosecution of the War. Temporarily assigned as representative on the Board of war Communication in London prior to the invasion of France, he arranged for the handling of heavily increased press and commercial communications loads for the post D-Day period, thereby contributing materially to the far-reaching success of vital mission…”

Captain Fenn commanded USS Prairie from October 1945 until February 1946, when he was ordered to the Bureau of Naval Personnel for temporary duty pending his retirement in December of that year.