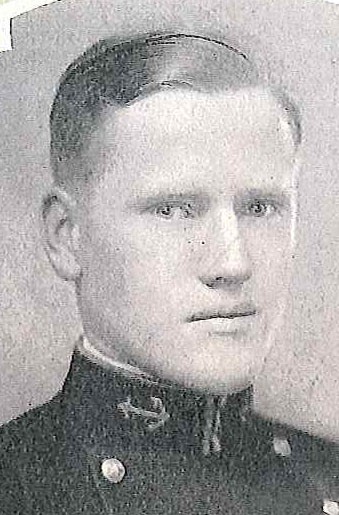 Harold Thomas Deutermann was born in New York, on October 8, 1903, son of William and Emma Ward Deutermann. He attended White Plains, New York, High School, from which he was graduated in 1921, and while working for two years in Scarsdale, New York, he was a member of the Organized Militia, New York National Guard. He entered the US Naval Academy, Annapolis, Maryland, as a Midshipman from New York on July 10, 1923, and was graduated and commissioned Ensign in the US Navy on June 2, 1927. Through subsequent promotions he attained the rank of Vice Admiral, his date of rank, January 2, 1960.

After graduation from the Naval Academy in June 1927, he served at sea that year and the next on board USS Richmond (CL-9), a unit of Scouting Force. Early in 1929 he was transferred to the Naval Torpedo Station, Rhode Island, for instruction, and later had preliminary flight training at the Naval Air Station, Pensacola, Florida. Still later that year he returned to sea duty as Chief Engineer of USS Humphreys (DD-236), a unit of Scouting Force, and from 1931 to 1933 he was on board USS Smith Thompson (DD-212) of Destroyer Squadron 15, Asiatic Fleet as Chief Engineer and Torpedo Officer. He remained on Asiatic Station, in 1933 and 1934, serving in the Gunnery Department of USS Houston (CA-30).

Returning to Annapolis in September 1934, he had instruction in Naval (Operating) Engineering at the Postgraduate School. Upon graduation in June 1936, he was ordered to USS Preston (DD-379) as Chief Engineer. After four years in that destroyer of the Battle Force, from her commissioning in January 1937 until December 1940, he reported to the Shipyard, Boston, Massachusetts, for a year’s shore duty in the Production and Planning Department.

Throughout World War II he served in the Pacific. Immediately after the Japanese attack on Pearl Harbor, he was ordered to duty as Chief Engineer of USS San Juan (CL-54), commissioned at Bath, Maine, Iron Works on February 28, 1942. In August 1943 he commissioned and assumed command of USS Cogswell (DD-651), and remained in that command until October 1944. Two months later he became Commander Destroyer Division 1932, his flagship USS Massey. During the Okinawa Campaign he also held the post of Chief Staff and Operations Officer for the Radar Picket Screen.

In command of Destroyer Division 132 he took part in the Guadalcanal Campaign, operations of the Task Forces 38 and 58 in the campaigns for Tarawa, the Marshalls, Philippine Islands, and Okinawa. For his World War II service he was awarded the Silver Star Medal; the Legion of Merit and a Gold Star in lieu of the second similar award; the Bronze Star Medal with Combat “V”; and two Letters of Commendation from the Commander in Chief, US Pacific Fleet, with Ribbon, bronze star and Combat “V.” Citations to the medals awarded follow, in part, in order of service for which received:

Bronze Star Medal: “For meritorious service as Engineering Officer on board USS San Juan during operations against enemy Japanese forces in the Pacific War Area from August 7, 1942, to April 24, 1943. During the supporting bombardment of the landing of our Marines on Guadalcanal on August 7, and in the air attack the following day, Captain (then Lieutenant Commander) Deutermann directed the operations of the engineering plant during periods of constant maneuvering, frequently at high speed. During the Battle of Santa Cruz on October 26, he was responsible for the successful performance of the engineering plant while operating at high speed in close proximity to other vessels of the Task Group and while under enemy air attack…”

Silver Star Medal: “For conspicuous gallantry and intrepidity in action as Commanding Officer of the USS Cogswell in operation during the period from October 13, to 17, 1944. When his ship was assigned as a screening vessel to a Task Group protecting the withdrawal from enemy waters of two severely damaged ships, under tow, (he) displayed outstanding seamanship in directing his ship through missions of rescue, of transferal of personnel under adverse conditions of wind and sea, and when under enemy air attacks…”

Legion of Merit: “For exceptionally meritorious conduct…as Commanding Officer of USS Cogswell, assigned to a Carrier Task Force, operating against enemy Japanese forces during the Palau and Philippines landing operations, from August 30 to November 11, 1944. Leading his command forcefully during more than thirty Japanese air attacks, a bombardment of enemy territory and a surface engagement, (he) fought his ship gallantly throughout operations against these formidable hostile strongholds and, by his daring initiative, fearless determination and skill, maintained a sturdy defense of the task force and contributed to the infliction of extensive damage upon the Japanese…”

Gold Star in lieu of Second Legion of Merit: “For exceptionally meritorious conduct…as Chief Staff Officer to the Commander of the Objective Area Screen during operations against enemy Japanese forces during the assault and capture of Okinawa from March to June 1945…(He) capably coordinated the numerous and diversified functions of the command to meet emergencies and provide adequate logistic support for all the ships of the group. Through his keen foresight and sound judgment, he was able to meet constant and intricate operational demands, thereby contributing materially to the success of the operations…”

After the cessation of hostilities he participated in the demobilization and occupation of Japan as Commander Destroyer Squadron 50 and Commander Destroyer Division 99. He returned to the United States and in March 1946 reported for shore duty as Commanding Officer of the Recruit Training Command, Bainbridge, Maryland. In 1947 and 1948 he was a student (senior course) of Strategy and Tactics at the Naval War College, Newport, Rhode Island.

From June 1948 until June 1950 he served as Senior Naval Advisor in Buenos Aires, Argentina, and for two years thereafter he was Assistant Director of Fleet Operations, in the Office of the Chief of Naval Operations, Navy Department, Washington, DC. He had instruction at Gunfire Support School, Norfolk, Virginia, and on October 18, 1952, assumed command of USS Roanoke (CL-145). After a year in that command he returned to the Office of the Chief of Naval Operations for duty as Assistant Director of the Material Division, until August 1955, when he reported as Deputy Commandant of the Industrial College of the Armed Forces, Washington, DC.

He was Commander Destroyer Flotilla TWO from May 1957 until June 1958, when he became Commander Naval Reserve Training Command, Omaha, Nebraska. On January 2, 1960 he reported as Commander, SECOND Fleet and in February 1961 became Chief of Staff and Aide to the Supreme Allied Commander, Atlantic. In January 1963 he was assigned as Vice Chairman, US Military Delegation, United Nations Military Staff Committee, with additional duty as Commander Eastern Sea Frontier and Commander Atlantic Reserve Fleet and a year later was named Chairman of that Delegation.

“ Fro exceptionally meritorious service…during the period February 1963 to April 1965 as Vice Chairman, and as Chairman, US Delegation, United Nations Military Staff Committee; Commander Eastern Sea Frontier; and Commander, Atlantic Reserve Fleet…” he was awarded the Distinguished Service Medal. The citation further states in part: “…Among his several accomplishments were his keen and perceptive analyses of the problem which arose incident to various crises, such as the Tonkin Gulf incidents and the Congo rescue mission, and his representation of the Department of Defense on the US Delegation to the Trusteeship Council where he worked tirelessly to protect the vital interests of the United States in relation to its overseas territories, especially the strategic Trust Territory of the Pacific Islands. As Commander, Eastern Sea Frontier, and Commander, Atlantic Reserve Fleet, he consistently displayed outstanding leadership, organizational ability, and aggressiveness in improving the procedures and facilities for logistic operation of shipping from the East Coast of the United States...”

Hospitalized in July 1965, he was transferred to the Retired List of the US Navy on October 1, that year.