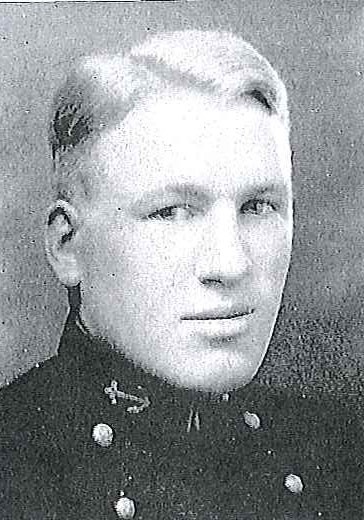 Michael Peter Bagdanovich was born in Nashua, New Hampshire, son of the late John and Agatha (Stanapedis) Bagdanovich.  He attended elementary and junior high schools in Nashua and on July 25, 1922, enlisted in the US Navy.  He was a student at the Naval Academy Preparatory School, Norfolk, Virginia, in 1923, and in June 1924, was appointed to the US Naval Academy, Annapolis Maryland.  As a Midshipman he excelled in sports, winning fame on the collegiate gridiron.  He played end on the National Championship team in 1926, and was nominated for All-American honors as a tackle his First Class year.  He was a member of the Varsity Crew for three years (Captain his First Class year), and participated in basketball, swimming, and wresting for four years.

Graduated and commissioned Ensign on June 7, 1928, he progressed in rank attaining that of Captain, to date from March 25, 1945.  On July 1, 1955, he was transferred to the Retired List of the US Navy and was advanced to the rank of Rear Admiral, on the basis of combat awards.

Following graduation from the Naval Academy in 1928, he was assigned to the Communications Division of USS New Mexico, flagship of Commander Battleship Division FOUR, Battle Fleet.  In May 1930, he transferred to USS Texas, flagship of the Commander in Chief, United States Fleet, to serve as Communication Officer until December 1930, when he detached for flight training at the Naval Air Station, Pensacola, Florida.

Designated Naval Aviator, November 23, 1931, he reported in March 1932 as Gunnery Officer with Fighting Squadron ONE – the famous “High Hat Squadron” – attached to USS Saratoga.  In June 1935, he joined Patrol Squadron FIVE, based at the Naval Air Station, Coco Solo, Canal Zone, and two years later, June 1937, assumed command of the Aviation Unit on board USS Detroit.  Detached from the Detroit in July 1940, he next served for two months as Chief Flight Instructor of Squadron FIVE, Naval Air Station, Pensacola, Florida, after which he had duty as Chief Flight Instructor, Executive Officer of the Training Squadron, and Training Officer at the Naval Air Station, Miami, Florida.

In March 1942, he became Commanding Officer and Group Commander of Escort Scouting Squadron THIRTY, attached to USS Charger, and later that year was assigned to USS Suwanee, participating in the invasion of North Africa.  The Suwanee was awarded the Presidential unit Citation, and he is entitled to the Ribbon for, and a facsimile of that citation.  He assumed command in January 1943 of Air Group SEVENTEEN, operating from USS Bunker Hill.  While in command of that group, he gained fame leading his fliers against enemy installations – wearing a baseball cap with three gold stripes (he was a Commander then) across the visor, and a stubby cigar in his mouth as he roared off the carrier in his TBF “Avenger” torpedo bomber.  For his exploits in the Pacific, which contributed to the sinking of several Japanese combatant ships, and the possible sinking and damaging of others, and after which valuable reconnaissance photographs were obtained, he was awarded the Air Medal, the Gold Star in lieu of a Second Air Medal, and the Distinguished Flying Cross.  The citations state in part:

Air Medal:  “For meritorious achievement…as pilot of a torpedo plane and as Commander of an air group during a bombing strike against enemy shipping at Rabaul, New Britain, on November 11, 1943.  Despite and intense and accurate anti-aircraft fire encountered, (he) pressed home his attack with aggressive determination and materially aided in the sinking of an enemy destroyer, one cruiser, the probable sinking of another cruiser, and the severe damaging of two additional combatant ships.  After the assault had been completed, he remained over the territory and photographed the damage inflicted on enemy vessels and shore installations…”

Gold Star in lieu of Second Air Medal:  “For meritorious achievement…during operations against enemy Japanese forces in the vicinity of Tarawa and Nauru from November 18 to December 8, 1943.  Completing his fifth mission during this period, (he) contributed materially to the success of his squadron in the infliction of damage on the enemy…”

He is also entitled to the Ribbon for, and a facsimile of the Presidential Unit Citation awarded the USS Bunker Hill.

Between September 1947 and August 1950, he was Head of the Aviation Ordnance Department at the Naval Proving Ground, Dahlgren, Virginia, followed by duty afloat in command of USS Norton Sound.  In November 1951, he became Commanding Officer of the Naval Auxiliary Air Station, Chincoteague, Virginia, and from June 1953 to January 1955 was in command of Fleet Air Wing FOURTEEN.  Following a period of hospitalization, he reported in March 1955 as Assistant to the Bureau of Aeronautics General Representative, Western District, Los Angeles, California.  He was serving in that capacity when relieved of all active duty pending his retirement, effective July 1, 1955.