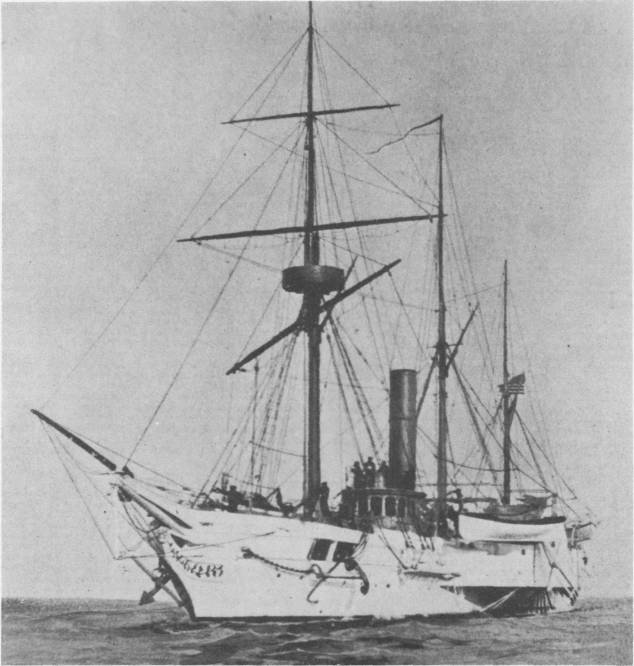 Caption: The iron sidewheeler Michigan, renamed Wolverine late in her life to allow her original name to be given to a new battleship (Battleship No. 27).

An American mammal found mostly in the northern United States. The state of Michigan is known as the "Wolverine State."

The second Wolverine (IX-64), a side-wheel excursion steamer built in 1913, was originally named Seeandbee, a euphonious name based upon her owners' company name, the Cleveland and Buffalo Transit Co. She was constructed by the American Shipbuilding Co. of Wyandotte, Mich. The Navy acquired the sidewheeler on 12 March 1942 and designated her an unclassified miscellaneous auxiliary, IX-64. Conversion to a training aircraft carrier began on 6 May 1942; and the name Wolverine, commemorating the first ship of the name, was approved on 2 August. Wolverine was commissioned at Buffalo, N.Y., on 12 August 1942, Comdr. George R. Fairlamb in command.

As the Navy's first side-wheeled aircraft carrier, Wolverine was equipped to handle plane take-offs and landings, a vital duty that she performed for the duration of World War II. She contributed to the winning war effort in World War II by training hundreds of pilots in basic carrier operations. During an inspection conducted by the admiral on 27 October 1942, she briefly flew the four-starred flag of the Commander in Chief of the United States Fleet and Chief of Naval Operations, Admiral Ernest J. King.

Her task completed and the war over in the summer of 1945, Wolverine was decommissioned on 7 November 1945 and struck from the Navy list on 28 November. The ship was transferred to the War Shipping Administration on 26 November 1947 and sold later that same year for scrapping.