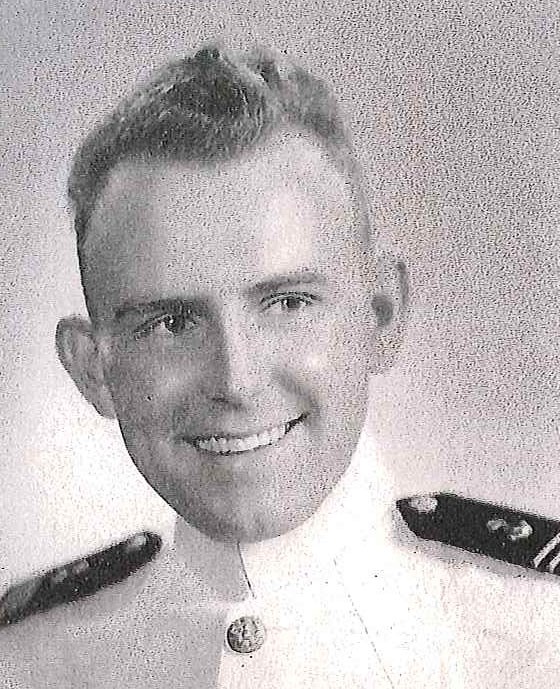 Paul Edward Arbo was born in New Orleans, Louisiana, on June 25, 1922.  He attended Alcee Fortier High School, New Orleans, Louisiana, and studied civil engineering at Tulane University of Louisiana, also in New Orleans, where he was a member of the Naval Reserve Officer Training Corps.  He received an appointment to the US Naval Academy, Annapolis, Maryland, from his native state in 1940.  While a Midshipman, he participated in intramural athletics and was a member of The Log and the Reception Committee.  Graduated with the Class of 1944 on June 9, 1943 (course of instruction shortened to three years due to World War II), he was commissioned Ensign and subsequently advanced in rank, attaining that of Captain, to date from September 1, 1963.

Following graduation from the Naval Academy in 1943, he served for three months at the Naval Air Operational Command, Jacksonville, Florida.  In September 1943, he was assign to USS Brownson (DD-518) as Assistant Torpedo Officer and Assistant Navigator.  While serving in that destroyer, he took part in the SEVENTH Fleet engagement in the Aleutian Islands from September to November 1943.  He was on board the Brownson when she sunk while participating in the Marine landings at Cape Gloucester, New Britain, on December 26, that year.  Detached from that vessel, he reported in February 1944 as a student at the Fleet Gunnery School, Washington, DC.

In May 1944, he joined USS Maddox (DD-731) to serve as Assistant Gunnery Officer and later Gunnery Officer.  While on board that destroyer, he participated in the THIRD and FIFTH Fleet attacks on the Philippine Islands, Formosa, Okinawa, and Japan from October 1944 to August 1945.  On January 21, 1945, the Maddox was and moderately damaged by a Japanese Kamikaze.  He was awarded a Navy Commendation Medal with Combat “V”, for action during a destroyer sweep of outer Tokyo Bay during which four enemy ships were engaged.  The citation follows in part:

“For outstanding service as Gunnery Officer of a United States destroyer in connection with operations against the enemy in the vicinity of Nojima Saki on July 22, 1945.    As a result of his leadership, devotion to duty, insistence on progressive training, determination, aggressive spirit, and professional skill, the gun and torpedo batteries in his charge functioned in an extremely creditable and devastating manner, with the ultimate outcome that his ship, along with other ships in his squadron, sank two, probably sank a third, and damaged a fourth enemy vessel…”

In December 1946, he reported as Executive Officer and Navigator of USS Southerland (DDR-743) and in August 1947 transferred to USS Princeton (CV-37), in which he had duty as Fire Control and Assistant Gunnery Officer.  From June 1949 to June 1951, he was a student at the US Naval Postgraduate School, Annapolis, Maryland, from which he received the degree of Bachelor of Science in Electrical Engineering.  He next had instruction at the California Institute of Technology, Pasadena, California, where he was awarded an Aeronautical Engineer Degree in Jet Propulsion in June 1952.

He served as Fire Control Officer and Assistant Officer in Charge of Guided Missile Unit #21, engaged in evaluating the TERRIER missile, on board USS Mississippi (EAG-128) until October 1954, when he reported as Commanding Officer of USS Coolbaugh (DE-217).  In August 1956, he was assigned to the Office of the Chief of Naval Operations, Navy Department, Washington, DC, where he was Assistant Head of the Surface to Air Branch, TALOS Program.

He was a student at the Armed Forces Staff College, Norfolk, Virginia, from January to June 1959, then assumed command of USS Dupont (DD-941).  In July 1961, he reported for instruction at the National War College, Washington, DC, and in June 1962 became Assistant for Research and Development to the Director, Inter-Service Liaison Group, Office of the Chief of Naval Operations.  In March 1963, he transferred to the Office of Naval Warfare Analysis, Office of the Chief of Naval Operations, where he headed the Antisubmarine Warfare Branch.

In August 1964, he reported as Director of the Special Project Team on the Staff of the Commander SECOND Fleet, and in October 1966 became Commander Destroyer Squadron EIGHT.  In December 1967, he was ordered detached for duty with the Naval Advisory Group, US Military Assistant Command, Vietnam.