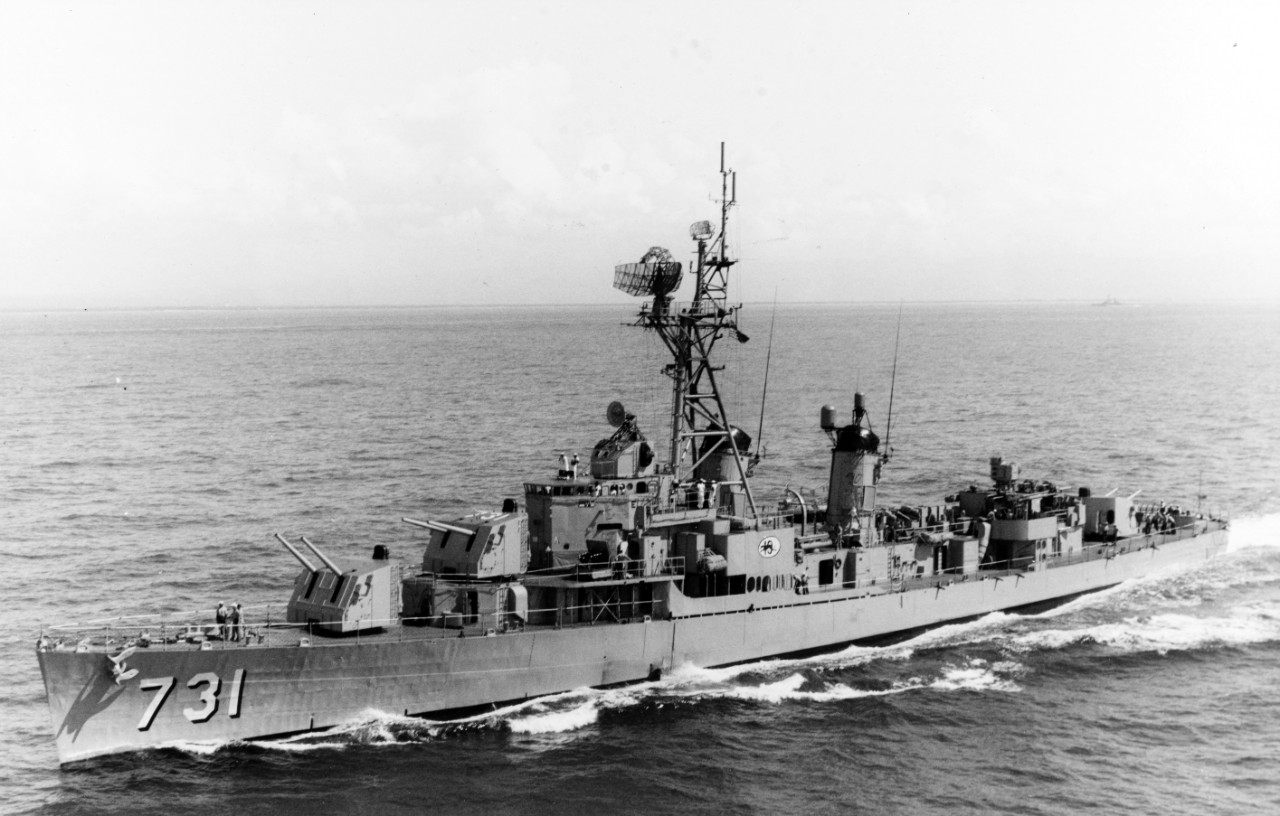 Maddox (DD-731) operating off Oahu, Hawaii, on 21 March 1964. Photographed by PH2 Antoine. Note the ship had recently been refitted with an SPS-40 air search radar. Official U.S. Navy photograph from the collections of the Naval History and Heritage Command. Catalog#: NH 97908.

William A. T. Maddox, born in Charles County, Md., in 1814, commanded a volunteer company in the Creek and Seminole Wars in 1836, and was appointed 2d lieutenant in the Marine Corps 14 October 1837. Serving in the Mexican War, he was breveted captain for "gallant and meritorious conduct" as Military Commandant of the Middle District of California during a Mexican uprising at Monterey and during the Battle of Santa Clara, 3 January 1847. Captain Maddox retired in 1880 and died in Washington, D.C., 1 January 1889. 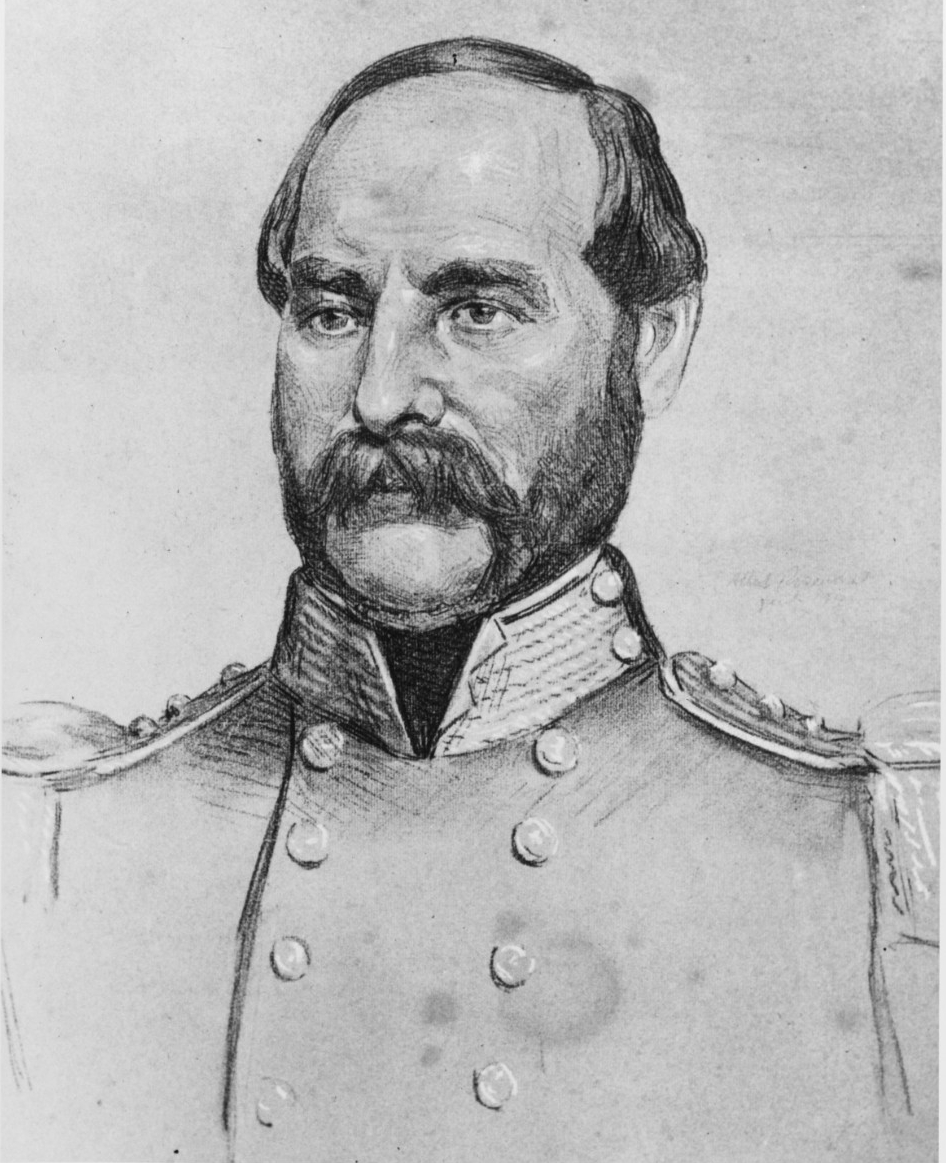 Following shakedown and antisubmarine exercises, Maddox departed Boston 27 August for Norfolk en route to the Pacific. Arriving at Ulithi 21 October 1944, she was assigned to Fast Carrier TG 38.1 of the 3d Fleet. As a member of this task group, Maddox took part in the preparation and the covering operations for the Mindoro and Luzon invasions, 4 November 1944 to 21 January 1945. During this period she served in the screen and on picket station in the South and East China Seas, while carrier-based planes struck air and naval bases from Saigon to Formosa. Hit by a suicide plane off Formosa on 21 January 1945, Maddox headed for Ulithi for repairs. Departing 14 March, the destroyer steamed off the Japanese home islands where she was on picket station during the airstrikes on Kyushu and southern Honshu. She proceeded to Okinawa 23 March to provide support for preinvasion strikes, remaining on duty there after the 1 April invasion date. For almost 3 months, until 13 June 1945, Maddox continued to provide support for this campaign in the form of shore bombardment and carrier screening for raids on Kyushu and Shikoku.

On 8 July, Maddox sailed from Leyte to participate in the operations of the 3d Fleet off the islands of Honshu and Hokkaido. From 10 July until the cessation of offensive action 15 August, she provided screening, picket, and shore bombardment services.

Following surrender, Maddox continued to patrol off Japan until departing Tokyo Bay 20 September with military passengers for the United States. Delivering her passengers to San Francisco on 5 October, she proceeded to San Diego, arriving on the 14th. She operated there until 1 February 1946, when she returned to the Far East to support the movement of naval occupation forces between Shanghai, Tsingtao, and Taku in China, and the ports of Pusan and Jinsen in Korea.

Returning to San Diego 24 March 1947, she operated for the next 3 years off the west coast, conducting reserve training cruises, serving as a training ship in antisubmarine warfare and gunnery and participating in maneuvers with the 1st Task Fleet.

On 1 May 1950, Maddox departed San Diego for the Far East, arriving Hong Kong 26 June, the day after the commencement of hostilities in Korea. Departing for South Korea the next day, she acted as plane guard and antisubmarine screen for Valley Forge and HMS Triumph. She operated there until August, when she departed for Formosa. On the 4th, she helped form the initial Formosa (later Taiwan) Patrol Force to prevent Communist Chinese invasion of Taiwan.

Maddox returned to Korea 7 September and assumed coastal blockade and bombardment duties. She continued this assignment, which included a diversionary bombardment of Samchok coordinated with the Inchon landings 15 September, until departing for the United States early in January 1951. Arriving at San Diego 31 January, she served as a training ship and underwent overhaul before departing 1 December 1951 for her second Korean duty. Through February 1952, she screened carriers off the east coast of Korea and provided shore bombardment support for the U.N. land forces. During March she operated with the Taiwan Patrol Force, returning to Korea in April. From 16 April through 17 May she participated in the siege of Wonsan, following which she resumed screening duties for fast carriers.

In June Maddox returned to San Diego, arriving on the 26th, to stay only 1 month before departing for her new home port of Long Beach. After local operations and overhaul, Maddox again sailed for the Far East 2 February 1953. As on her second Korean deployment, the destroyer again guarded the fast carriers along the eastern coast of Korea; participated in shore bombardments, this time as far north as Hungham; and served, for a 2‑week period, in the Taiwan Patrol Force. Completing her 1953 Korean tour 12 August she departed for Long Beach, arriving on the 30th.

Maddox operated off the west coast until the next spring. On 4 May 1954, she sailed for duty with the 7th Fleet. On this tour, which lasted until 5 December, she took part in antisubmarine warfare tactics and attack carrier exercises off Kyushu, Korea, and Luzon as well as operating with the Taiwan Patrol Force.

From 14 June 1955 through 2 March 1962, Maddox completed 6 additional cruises to the Far East. These cruises included combined defense exercises with the forces of other SEATO nations and training operations with South Korean, Nationalist Chinese, and Japanese Self‑Defense Forces.

Having operated off the west coast for 2 years, from March 1962, Maddox departed Long Beach 13 March 1964 for another tour with the 7th Fleet. At first steaming with fast carrier groups in the Sea of Japan and the East China Sea, she headed south 18 May and established patrol off the coast of South Vietnam. 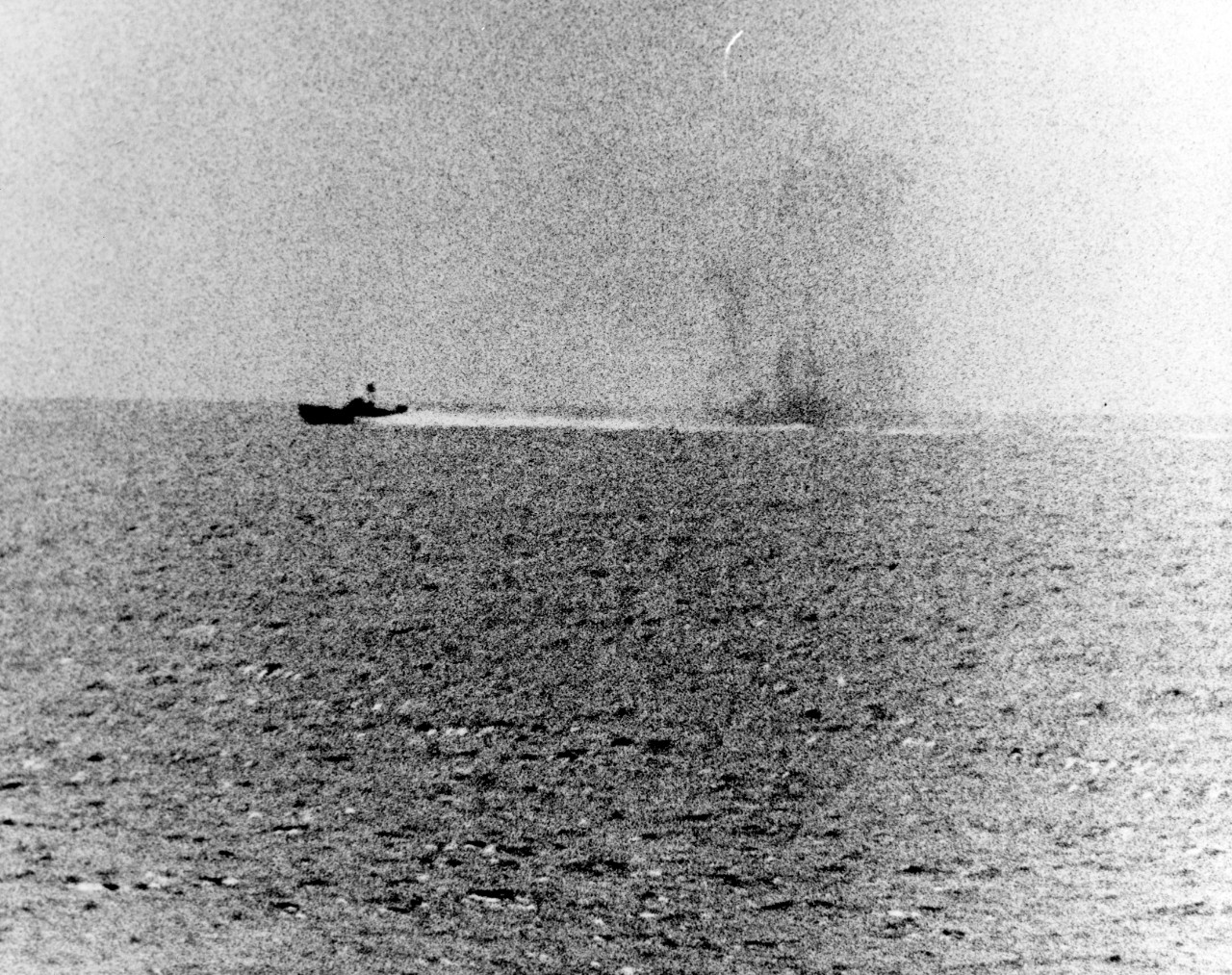 Photograph taken from Maddox (DD-731) during her engagement with three North Vietnamese motor torpedo boats in the Gulf of Tonkin, 2 August 1964. The view shows one of the boats racing by, with what appears to be smoke from Maddox' shells in its wake. Official U.S. Navy photograph. Catalog#: USN 711524.

On 31 July she commenced the first leg of a patrol in the Tonkin Gulf. Initially a routine patrol, it developed into a defensive action with global repercussions. On 2 August, Maddox, cruising in international waters, was closed in a torpedo run by three North Vietnamese torpedo boats. During the ensuing skirmish, in which torpedoes were launched at Maddox, the destroyer put two of the Communist boats out of action with direct hits.

This attack, at first assumed to have been in error, was proven deliberate within 48 hours. On the 4th, North Vietnamese patrol boats again attack Maddox, which by this time had been joined by Turner Joy. Early detection and skillful evasion permitted the destroyers to break contact with the first assault units sent against them on that date. But, little over an hour later, enemy torpedo boats closed in again, launching torpedoes. Maddox commenced firing starshells for illumination, while Turner Joy opened fire on the attacking boats. The fighting continued for 2 1⁄2 hours before being broken off by the North Vietnamese. Retaliation in the form of airstrikes on North Vietnamese patrol boat bases and their supporting oil storage depots came within a few hours. For this action both ships were awarded the Navy Unit Commendation. Following the incident, the destroyers returned to their patrol, completing it on the 8th. Maddox then resumed carrier operations until departing for Long Beach 17 September.

After arrival at Long Beach, Maddox remained in a leave and upkeep status until mid‑January 1965, then conducted training exercises and repairs in preparation for her next WestPac deployment. She departed Long Beach 10 July and commenced operating with the fast carriers in the Gulf of Tonkin in early August. For the next 4 months, Maddox alternated duty with the carriers with gunfire support missions off the coast of South Vietnam. At the end of November she sailed for home, arriving at Long Beach 16 December.

After conducting upkeep and local exercises off the California coast, summer 1966 saw her engaged in a training cruise for midshipmen which included a trip to Pearl Harbor. Maddox departed California 20 November for another deployment with the 7th Fleet, sailing by way of Pearl Harbor, Midway, Guam, and Taiwan.

After a successful tour consisting primarily of providing gunfire support, interrupted by a visit to Singapore and a crossing of the Equator on 8 February 1967, Maddox departed Subic Bay, Philippine Islands, for home by way of Australia, New Zealand, and Pearl Harbor. She arrived at Long Beach 7 June 1967 and conducted local exercises until entering Long Beach Naval Shipyard 13 October for overhaul. She remained in overhaul until February 1968; then, after refresher training off the west coast, departed for WestPac 5 July. She continued to perform the variety of missions for which destroyers have always distinguished themselves, and returned to California in December. After completion of overhaul and type training, Maddox once again deployed to the Far East in July 1968, returning in December, 1968 to her home port, Long Beach, for overhaul and upkeep. She remained there until early 1969 when she was ordered to decommission. 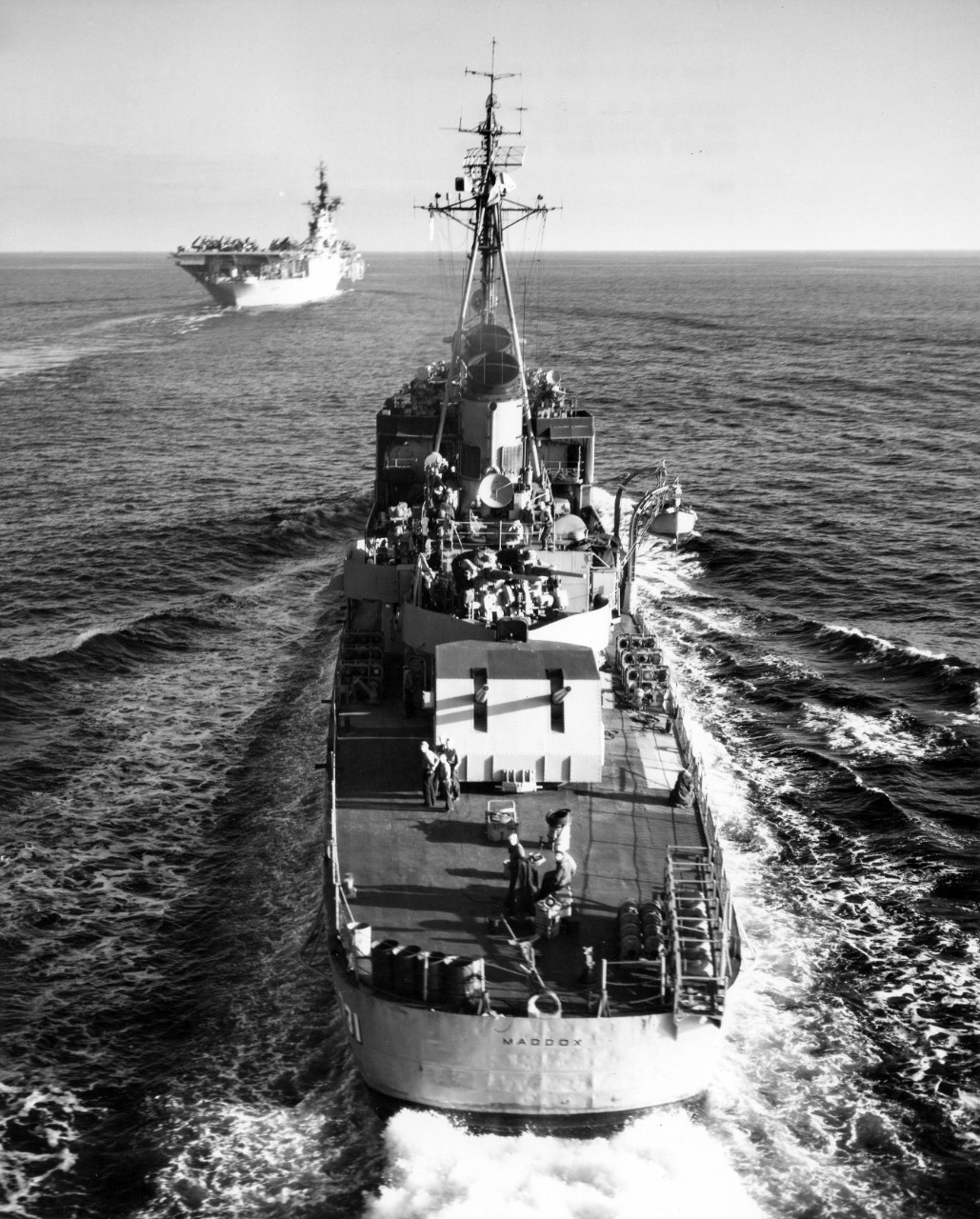