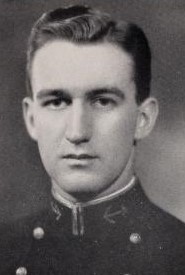 Carl Franklin Faires, Jr., was born in Atlanta, Georgia, on January 12, 1910, son of the late Carl F. and Nevada (Moring) Faires. He attended Emory High School in Atlanta and the Marion (Alabama) Institute, prior to his appointment to the US Naval Academy, Annapolis, Maryland, from his native state in 1928. Graduated and commissioned Ensign on June 2, 1932, he subsequently advanced in rank, attaining that of Commander to date from November 18, 1942. On September 12, 1935, he was transferred from the Line of the Navy to the Supply Corps.

Following graduation from the Naval Academy in 1932, he joined the USS Colorado and in July 1933 was assigned further sea duty in the USS Mississippi. In March 1934 he transferred to the USS Richmond and in September 1935 was detached for instruction at the Naval Finance and Supply School, Philadelphia, Pennsylvania. Completing the course there in May 1936, he next served as Disbursing Officer on the staff of Commander Mine Division ONE, and in July 1937 reported as Assistant for Disbursing with additional duty as Assistant to the Supply Officer on board the USS Beaver.

Returning to the United States in August 1938, he was Assistant to the Supply Officer at the Puget Sound (Washington) Navy Yard until September 1939. Following duty in connection with the commissioning of Destroyer Division EIGHTY-THREE in the Eleventh Naval District, San Diego, California, he reported as Disbursing Officer on the Staff of the Commander of that division upon its commissioning, October 30, 1939. From June 1940 until March 1941 he served as Disbursing Officer at the Receiving Station, Boston, Massachusetts, after which he was assigned to the Navy yard, Boston, as Assistant to the Supply Officer.

Ordered to the Philippines in October 1941, he reported for duty at headquarters SIXTEENTH Naval District, and was serving there at the time Japanese invasion. “For extraordinary heroism during the bombardment and occupation of the Philippine Island by enemy forces beginning December 10, 1941…” he was awarded the Navy Cross. The citation continue in part: “Courageous and untiring under repeated and sustained hostile bombing and strafing attacks, Commander (then Lieutenant) Faires rendered valiant service during the gallant stand by our forces against a prolonged and determined siege by the Japanese…”

On May 6, 1942 he was reported “missing in action” but in July of that year arrived in Australia, where he served as Assistant to the Officer in Charge of the Supply, Accounting and Disbursing Office for the US Navy. From October 1942 until August 1943 he served as Assistant to the Force Supply Officer on the staff of Commander Service Force, Southwest Pacific Force (later redesgnated Service Force, SEVENTH Fleet). He next had duty as Representative of the SEVENTH Subordinate Command, Service Force, Pacific Fleet, in San Francisco, California, until May 1945.

He was Executive Officer later Officer in Charge of the Naval Supply Operational Training Center, Naval Supply Depot, Bayonne, New Jersey, for a year, followed by duty as Supply Officer in Command of the Naval Supply Corps School, Bayonne. He was serving as such when he tendered his resignation, which was effective, January 23, 1947. Commander Faires died in Atlanta, Georgia, on January 19, 1954.