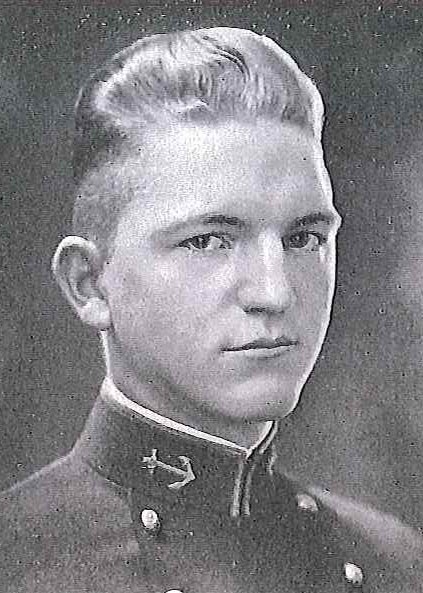 Lowe Hayden Bibby was born on May 16, 1899, at Charleston, Mississippi, son of the late Dr. Lowe H. Bibby and Mrs. Bessie (Calhoun) Bibby. He was graduated from Grenada High School, Grenada, Mississippi and attended Millsaps College, Jackson, Mississippi, for year before his appointment to the US Naval Academy, Annapolis, Maryland, from his native state in 1918. Graduated and commissioned Ensign on June 2, 1922, he received progressive promotions until he attained the rank of Captain, to date from April 1, 1943.

Upon graduation from the Naval Academy in June 1922, he was assigned duty in USS Florida, a unit of Battleship Division 1, Scouting Fleet, and during the period 1923 he had further sea duty in the destroyer Breck, Overton and Williamson; and, after submarine instruction at the Submarine School, Newport, Rhode Island, in the submarines S-43 and S-25. He had shore duty from 1930 until 1932 as Officer in Charge of the Experimental Diving Unit, Navy Yard, Washington, DC.

He again had submarine duty (1932-1935) in successive command of USS S-4 and the USS S-43, after which he returned to Annapolis for a tour of duty as instructor in Electrical Engineering. In 1938-1939 he served on the staff of Commander, Submarine Squadron 5 operating between China and Manila, PI, and in 1940, commanded Submarine Division 10. He then became First Lieutenant of the cruiser USS August. He remained aboard the Augusta until 1943, participating in the Invasion of North Africa in November 1942, while serving as her Executive Officer.

Returning to the United States in the summer of 1943, he reported fro duty first as Commanding Officer of the Naval Training School (Officers’ Damage Control), and later as Commanding Officer of the Naval Damage Control Training Center, Philadelphia, Pennsylvania. He received a Letter of Commendation with authorization to wear the Commendation Ribbon from the Secretary of the Navy for services in that assignment.

Relieved of command of the Damage Control Training Center, he served as Deputy Chief Military Government Officer, on the staff of the Commanding General, Tenth Army, and later as Commanding Officer of the US Naval Military Government, Okinawa, Ryukyu Islands, from D-Day of Invasion of Okinawa, April 1, 1945, until October 1945. For exceptionally meritorious service in the two assignments, he was awarded the Legion of Merit with citation, in part, as follows:

Returning to the United States in November 1945, he was ordered to duty as Commanding Officer of USS Portland (CA 33), and in 1946 was transferred to command of USS New York (BB 34). For outstanding services as “Commanding Officer of the USS New York, a major target vessel of Joint Task Force One, during Operation Crossroads, from February to July 1946…..” he received a Letter of Commendation, with authorization to wear a bronze star on his Commendation Ribbon, from the Secretary of the Navy.