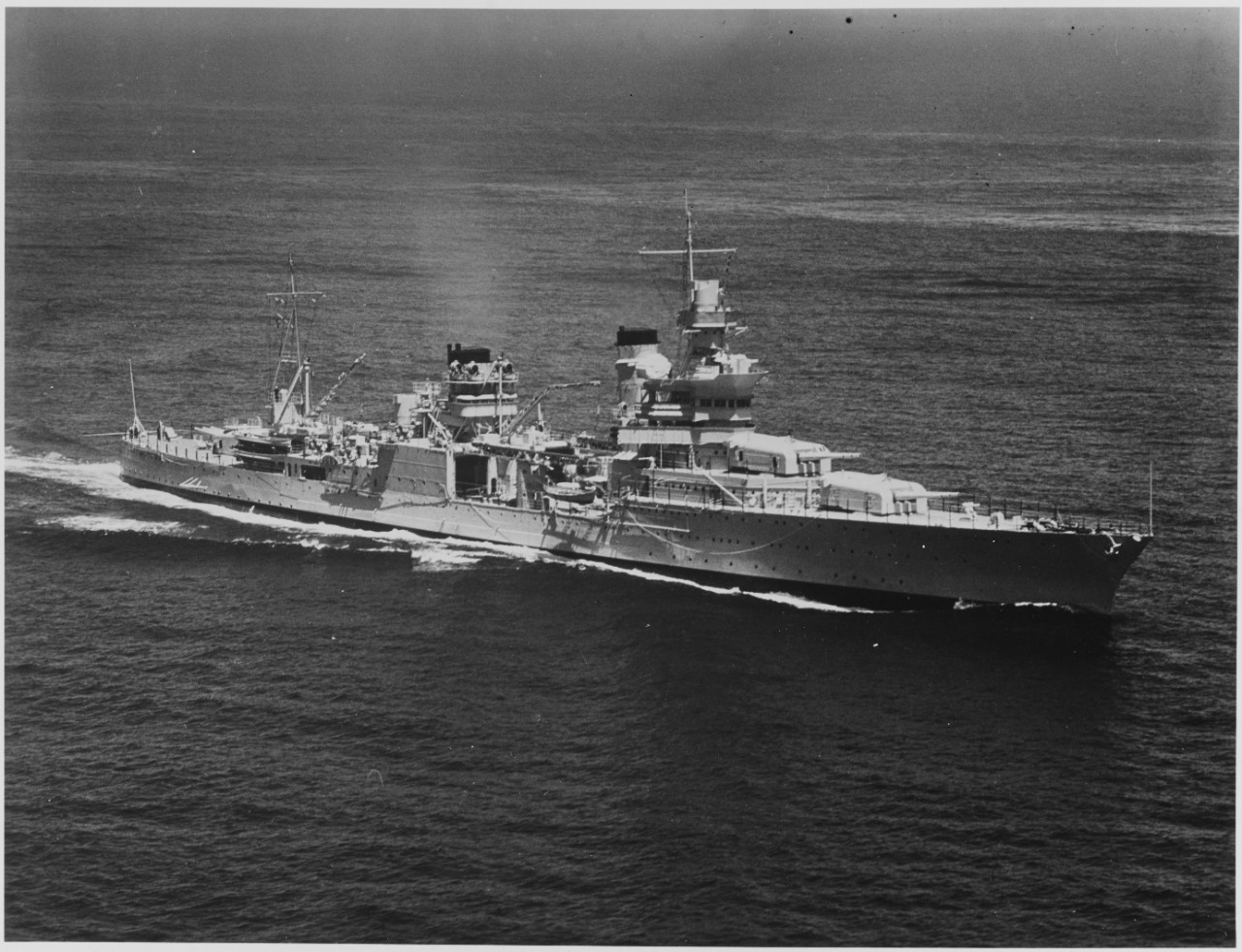 The first Portland (CA-33) was named for the city in Maine.

Departing Boston 1 April 1933, the cruiser arrived Gravesend Bay, N.Y. the evening of 3 April. The next night she received word that dirigible Akron was down at sea. Thirty six minutes after receipt of the message the ship was underway. Racing seaward, she was the first naval vessel at the scene of the disaster, and the task of search and rescue coordination was thus hers. Seventy-three lives were lost in the disaster, including that of Admiral William Moffett, Chief, Bureau of Aeronautics.

Portland steamed from San Diego, Calif. 2 October 1935 astern Houston (CA-30) which carried President Franklin D. Roosevelt. The following days the president and his party fished. After calling at Panama and several other ports, the two ships steamed to Charleston, S.C. where the president disembarked.

During Pacific Fleet maneuvers, Portland crossed the equator for the first time 20 May 1936. From thence until the outbreak of war she was engaged in peacetime training and goodwill missions as a unit of Cruiser Division 5, Scouting Force.

When the Japanese attacked Pearl Harbor, Portland was two days out enroute Midway with a carrier group. Through the remainder of December and until 1 May 1942 she operated between the west coast, Hawaii, and Fiji.

Portland served in Rear Admiral T. C. Kinkaid-s Attack Group 4-8 May when a Japanese invasion force was turned back from Port Moresby, New Guinea during the two-day Battle of the Coral Sea. When Lexington (CV-2) was lost, the cruiser took on 722 survivors. She was in Rear Admiral F. J. Fletcher-s TF 17 carrier screen during the Battle of Midway (2-6 June) when the Japanese lost four of their carriers. Portland provided cover and support for the Marine landings at Tulagi and Guadalcanal, the Solomons 7 through 9 August. She then remained in the area to support the Guadalcanal operations and to protect Allied communications lines.

The cruiser participated in the Battle of the Eastern Solomons 23-25 August, when Allied forces prevented reinforcement of Japanese units in the Solomons by a large naval armada under Admiral Yamamoto. She then steamed south to take part in the Battle of Santa Cruz 26-27 October as one of the escorts for Enterprise (CV-6). Two weeks later she participated in the Naval Battle of Guadalcanal (12-15 November) which resulted in heavy damage to both forces but broke up the determined Japanese effort to disrupt the landing of 6,000 American troops on Guadalcanal, to bombard Henderson Field, and to land reinforcements.

During this action 13 November 1942, Portland took a torpedo hit at 0158 on the starboard quarter, which blew off both inboard propellers, jammed the rudder five degrees right, and jammed number three turret in train and elevation. A four degree list was quickly corrected by shifting ballast, but the steering casualty could not be overcome and the ship was forced to steam in circles to starboard.

At the end of the first circle a Japanese battleship, illuminated by nearby burning ships and flares, was taken under fire by Portland's forward turrets. The enemy returned the fire, but all salvos passed over the cruiser. In the four six-gun salvos returned by Portland, she succeeded in starting fires in the Japanese heavy. Then again at 0630, still circling, Portland opened fire on an enemy destroyer at a range of six miles. On the sixth salvo the destroyer exploded, rolled over, and sank within five minutes.

With the assistance of Higgins boats, a YP, and a tug, Portland anchored at Tulagi 14 November. From there she was towed to Sydney, Australia for preliminary repairs prior to overhaul in the United States. Following short stops at Samoa and Pearl Harbor, the ship arrived Mare Island Navy Yard 3 March 1943.

After operational training in southern Californian waters, Portland steamed for the Aleutians late in May, arriving 11 June and bombarding Kiska 26 July. After covering a reconaissance landing on Little Kiska 17 August, she called at Pearl Harbor 23 September, thence to San Francisco in early October, then back to Pearl Harbor in mid-October.

From November 1943 through February 1944, Portland participated in the Gilbert and Marshall Islands campaigns. She next screened carriers during air strikes against Palau, Yap, Ulithi, and Woleai 30 March-1 April.

The ship then steamed with a carrier force assigned to cover the landing in the Hollandia-Tanahmerah area of New Guinea 21-24 April. Cruising northward again the force struck at Truk and, in company with five other cruisers, and destroyers, Portland bombarded Satawan in the Nomei Group.

Following this series of operations Portland steamed for Mare Island for overhaul, completed in time for her return to the western Pacific for pre-landing bombardments of Peleliu 12-14 September. The cruiser supported the landing on Peleliu 15 September; and, for the four following days, her guns blasted enemy positions that threatened the advance of allied forces. She provided gunfire support at Peleliu through 29 September and then steamed for Seeadler Harbor, Manus, the Admiralties.

Portland next joined a powerful force in the first heavy surface strike on the central Philippines. She arrived off Leyte 17 October, entering the Gulf the next day, two days before A-Day. For those two days her guns softened up enemy held positions in preparation for the landing.

The night of 24 October a strong Japanese force consisting of two battleships, one heavy cruiser, and four destroyers headed for Surigao Strait with the apparent intent of raiding shipping in Leyte Gulf. The Japanese force advanced in rough column up the narrow strait during darkness, while Portland and her sisters steamed across the top of the strait, crossing the enemy's T. The Japanese were first met by PT boats, then in succession by three coordinated destroyer torpedo attacks, and finally by devastating gunfire from American battleships and cruisers disposed across the northern end of the strait. The Japanese force was utterly defeated, losing two battleships and three destroyers.

From 3 January through 1 March 1945, Portland participated in the operations at Lingayen Gulf and Corregidor. Arriving off Lingayen Gulf 5 January and bombarding the vicinity of Cape Bolinao, she entered the Gulf the same day and commenced bambardment of the eastern shore but discontinued immediately when a heavy suicide air attack came in.

Portland entered Manila Bay 15 February and bombarded the south shore of Corregidor in preparation for landings there. She returned to Leyte Gulf 1 March for her first availability for repairs, and replenishment of general stores in five months.

From 26 March through 20 April, while conducting operations in support of the Okinawa campaign, Portland underwent twenty-four air raids, shot down four enemy aircraft, and assisted in downing two others. From 8 May until 17 June she participated in the bombardment and capture of Okinawa, departing 17 June for upkeep at Leyte. At Buckner Bay 6 August she commenced upkeep and training.

With the termination of hostilities Portland was designated flagship of Vice Admiral George D. Murray, Commander Marianas, who was to accept the surrender of the Carolines. The ship steamed to Truk Atoll and there Admiral Murray, acting for Fleet Admiral Nimitz, accepted the formal capitulation of the senior Japanese military and civilian officials in ceremonies in Portland.

Portland called at Pearl Harbor 21-24 September, there embarking 600 troops for transportation to the United States. Transiting the Panama Canal 8 October, she continued to the U.S., calling at Portland, Maine for Navy Day celebrations 27 October. She reported 11 March 1946 to the Philadelphia Naval Shipyard for inactivation and assignment to the Reserve Fleet. She decommissioned at Philadelphia 12 July 1946 and was maintained in reserve status until struck from the Navy List 1 March 1959. The cruiser was sold to Union Mineral and Alloys Corp., New York, N.Y. 6 October 1959 and scrapped. 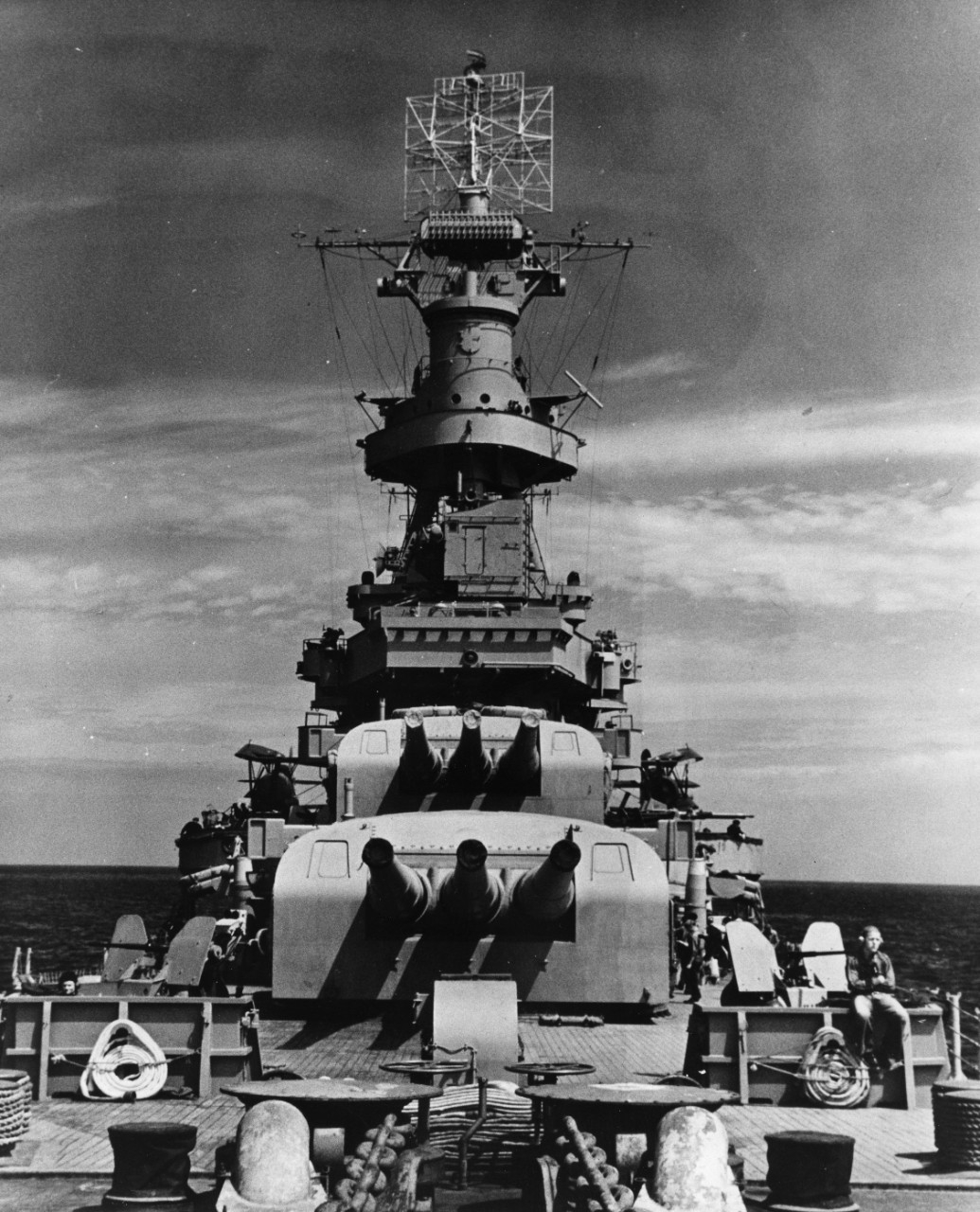 Portland (CA-33) view looking aft from the foredeck while at sea in 1944. Note the ship's two forward 8/55 gun turrets and the arrangement of her forward superstructure. A Mk.33 gun director with Mk.28 fire control radar is atop the pilothouse. Director atop the tripod foremast is a Mk.34, with Mk.8 fire control radar. The large radar antenna at the foremast peak is a SK. Courtesy of Vice Admiral T.G.W. Settle, USN (Retired), 1975. U.S. Naval History and Heritage Command photograph. Catalog#: NH 82031