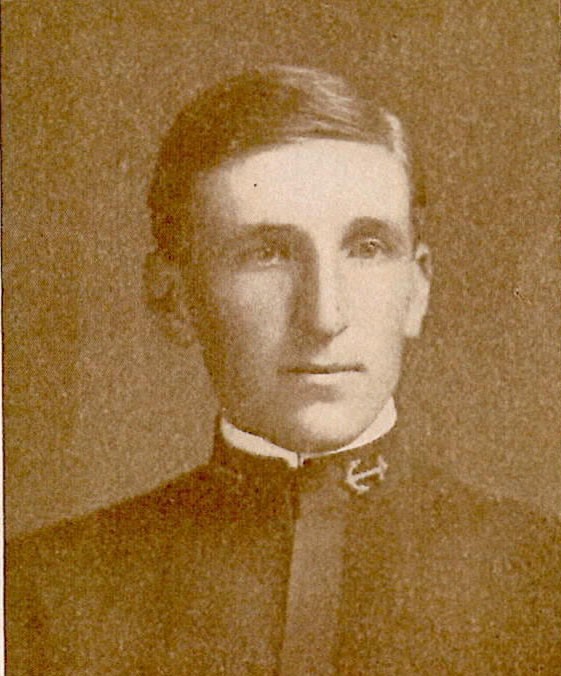 Rear Admiral Bemis, born in Oshkosh, Wisconsin, on July 15, 1884, attended Oshkosh High School before entering the United States Naval Academy on appointment from his native state on June 24, 1903. While at the Academy, he participated in football, in his Plebe year, and boxing. He was in a section of the Class of 1907 which was graduated in September 1906, and was assigned to duty in USS Maine. Following the two years’ service at sea, then required by law, he was commissioned Ensign on September 13, 1908, and promoted as follows: Lieutenant (junior grade), September 13, 1911; Lieutenant, March 4, 1915; Lt. Commander (for temporary service during World War I). August 31, 1917; Lt. Commander, July 1919; Commander, June 3, 1922; and Captain, August 1, 1933. On January 11, 1941, he was designated as Commandant, 16th Naval District, with rank of Rear Admiral, this designation terminating September 30, 1941. On April 12, 1946, he was nominated to be Rear Admiral and the nomination was confirmed to rank from April 18, 1946.

In 1908-1909 he served on gunboats in the Asiatic Station and while in this duty participated in the campaign against the Moro outlaw, Jikiri, in the Sulu Islands. He served in the Great Lakes in 1910, first in USS Wolverine, later on Staff of Commander, Great Lakes Squadron. From 1911 until 1914, he had duty successively in the battleships Iowa, Illinois, and Georgia, and from September 1913 to July 1915, he was instructor in ordnance, gunnery and seamanship at the Naval Academy.

On July 8, 1915, Rear Admiral Bemis reported to USS Columbia for submarine instruction, and for further instruction was assigned to the Third Division Submarine Flotilla, Atlantic Fleet, and USS Fulton. Qualified in submarines, he had command of USS G-1 before assuming command, in 1917, of Submarine Division five, the only division of submarines sent to operate in the dangerous British waters during World War I. For this service he was awarded the Distinguished Service Medal, with citation as follows:

“For distinguished service in the line of his profession as Commander of Submarine Division 5, making a trip to British waters and operating in those waters against German submarines, and later making a voyage with one tug and three submarines from Bermuda to the Azores under very difficult conditions. Finding himself on board a British submarine when all her officers and two-thirds of her crew were down with influenza, he took command of the British submarine and conducted a successful patrol for five days off the German coast.”

At the time it was stated in British Naval Circles that Commander Bemis was the only American Naval Officer who had ever commanded a British Man-of-War.

He also received a Letter of Commendation from the Secretary of the Navy in regard to duty in the British Submarine E-29.

Rear Admiral Bemis continued to serve in submarines until 1921, commanding in succession the Submarine Divisions 2, 7, 6, and 8, and the submarine tender USS Beaver. In connection with the visit of the Beaver and submarines to Bermuda, he received a Letter of Commendation from the Secretary of the Navy. He was in charge of the Submarine Division in the Office of Naval Operations, Navy Department, from 1921 until 1924, when he joined USS New Mexico and served as her gunnery officer until June 1926. Following this assignment, he received Letters of Commendation from the Commander in Chief, Battle Fleet, and from Commander, Battleship Division 3, regarding the condition of the gunnery department of the New Mexico.

Duty as Assistant Commandant, Fifteenth Naval District, followed in 1926 and 1927, and in August 1928, Rear Admiral Bemis assumed command of the Submarine Base, Coco Solo, Canal Zone. He was Commander, Submarine Division 16, later redesignated Submarine Division 9, Asiatic Fleet, from July 1929 to April 30, 1931. While in this command he received two Letters of Commendation from the Commander in Chief, Asiatic Fleet, regarding intelligence reports. From July 1931 to 1933 he served as Federal Coordinator of the First Area, Boston, Massachusetts, during which time he received a Letter of Commendation from the Chief Coordinator, Federal Coordinating Service, regarding duty as Coordinator.

Rear Admiral Bemis reported to the Naval War College, Newport, Rhode Island, for instruction in July 1933 and completing the senior course in May 1934 was assigned to USS Indianapolis, with duty as operations officer on the Staff of Vice Admiral Arthur J. Hepburn (now Admiral, Retired), Commander, Scouting Force. Reporting to the Office of the Chief of Naval Operations in June 1936, he was made Naval Attache and Naval Attache for Air, American Embassy, Tokyo, Japan, from August 1936 until May 1939. He commanded USS California from June 1939 until December 1940 when he reported as Commandant, Sixteenth Naval District, Navy Yard, Cavite, PI, with additional duty as Commandant, Navy Yard, Cavite, PI, and Commander of the Philippine Naval Coastal Frontier. He was detached from this assignment, during which he served as Rear Admiral, on September 30, 1941.

Shortly after his Naval retirement, Rear Admiral Bemis was sent to Venezuela by the Lummus Company of New York, an engineering and construction firm, to establish their South American subsidiary with headquarters in Caracas. During his eight years, 1947-1955, as President of Compania Anonima Venezilana Lummus, the Company erected Electric Power plants, Gas Absorption plants and 75% of the oil refineries built in Venezuela during those boom years. Upon retirement from business in 1955, he returned to Washington, DC to reside at 2101 Connecticut Avenue with a summer residence in Jamestown Rhode Island.

He is a member of the Army-Navy Club of Washington, The Chevy Chase Club, the Jamestown Golf and Country Club, and the Conanicut Yacht Club