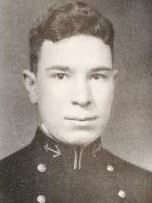 Robert Eli Fair was born in New Philadelphia, Ohio, on May 5, 1911, son of Eli N. and Mabel (Emerson) Fair. He attending public schools in his native city, before entering the US Naval Academy, Annapolis, Maryland, from the Sixteenth District of Ohio in 1929. Graduated and commissioned Ensign on June 1, 1933, he subsequently attained the rank of Commander, to date from January 1, 1944.

Following graduation from the Naval Academy in 1933, he joined the USS Saratoga and in February 1935 was detached for duty in the USS Pillsbury. He remained aboard that destroyer attached to Asiatic Station until September 1935, and then had consecutive service until October 1937 in the USS Tutuila and USS Luzon. After a month’s duty in the USS Panay, station ship at Nanking, China, he reported, in January 1938, aboard the USS Tennessee. He transferred in April 1939, to the USS Henderson, and was aboard that transport until March 1940, when he was assigned to the USS Lexington.

Returning to the Naval Academy in August 1941, he served as an Instructor in the Department of Ordnance and Gunnery until October 1943, and in December joined the USS Saratoga as Gunnery Officer. During November and December 1944 he had temporary duty in the Twelfth Naval District, San Francisco, California, after which he reported as Navigator aboard the USS Colorado.  The Colorado was undergoing battle damage repairs at Manus Island, when he reported aboard, and upon the completion of the work, she sailed to participate in the Luzon landings.

Levelling her guns on Luzon on January 2, 1945, the Colorado took part in the softening operations, and a week later, January 9, moved in a determined shore battery inland, opening up all-out artillery assault. A heavy caliber shell from one of the shore guns hit the superstructure of the Colorado, causing severe causalities on the navigation bridge and sky control, including Commander Fair who killed. He was posthumously awarded the Purple Heart Medal.