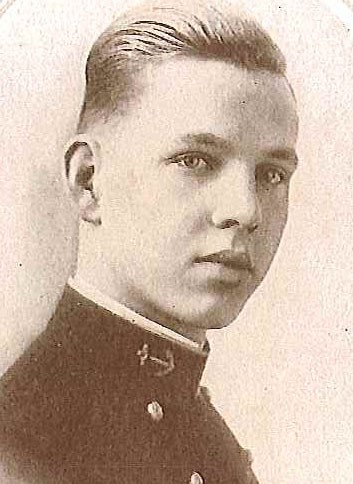 Leon Sangster Fiske was born in Bangor, Maine, on September 3, 1894, son of Frederick O. and Minnie Lauretta (Mitchell) Fiske. He attended public schools on Bangor and Thomaston, Maine, and was appointed to the US Naval Academy, Annapolis, Maryland, from his native state in 1912. As a Midshipman he participated in class athletics and won class numerals in soccer. Graduated and commissioned Ensign on June 3, 1916, he subsequently progressed in rank, attaining that of Rear Admiral to date from August 7, 1947. On July 1, 1953 he was transferred to the Retired List of the US Navy and, was advanced to the rank of Vice Admirals on the basis of combat citations.

After graduation from the Naval Academy in 1916, he joined the newly commissioned destroyer Tucker (DD 57). Following the United States entry into World War I, the Tucker arrived in Queenstown, Ireland, in May 1917, as a unit of the second destroyer division to be sent overseas. He had duty as Navigator of that destroyer while she performed anti-submarine and convoy assignments, operating out of Queenstown and Brest, France, and during his last six months aboard served as Engineer Officer.

In August 1918 he returned to the United States and reported to the Fore River Shipbuilding Company, Quincy, Massachusetts, where the USS Palmer was fitting out. At the hour of the Armistice the Palmer was conducting her acceptance trails off Rockland, Maine, and he continued duty as Engineer Officer of that destroyer from her commissioning November 22, 1918, until October 1920. Detached from the Palmer, he served variously as Engineer Officer, Navigator, Executive Officer, and Commanding Officer aboard the destroyers Hogan, Paul Hamilton, McCawley, Tattnall and Stribling until August 1922. Following an assignment as Executive Officer of the Receiving Ship at San Francisco, California, he joined the USS Kennedy as Executive Officer in September 1924.

He reported in May 1927 as Instructor in the Department of Electrical Engineering and Physics at the Naval Academy, and served in that capacity for a year, when he became Assistant to the Commandant of Midshipman. He remained there until June 1930, when he joined the staff of Commander Destroyers, Battle Force, as Aide and Flag Secretary. Returning to the United States in June 1934, he completed the course at the Naval War College, Newport, Rhode Island, in May 1935, and continued duty on the staff until May of the next year.

He served as First Lieutenant and Damage Control Officer of the USS Colorado, and in April 1937, assumed command of the USS Arctic. He commanded that fleet provision ship of the US Pacific Fleet, until June 1938 when he returned to shore duty in the Central Division, Office of the Chief of Naval Operations, Navy Department, Washington, DC. Between August 1938 and June 1941 his duties included Department Administration for the Naval Governments of Guam and Samoa.

On July 2, 1941 he assumed command of the newly-built and commissioned fleet repair ship Vulcan. While under his command the Vulcan stationed at Argentina, Newfoundland, and later at Hvalfjodur, Iceland, during the fall and winter of 1941-1942, served as repair ship for American destroyers convoying ships bound for England with lend-lease materials during this period the Vulcan assisted in making repairs. For outstanding accomplishment in assisting in the repairs of the Kearney, he received a Letter of Commendation, with authorization to wear the Commendation Ribbon, from the Commander in Chief, US Fleet. The citation follows in part:

“Appreciating that the temporary repairs were rapidly accomplished in an open, notoriously rough harbor in icy water at a latitude and season where the available hours of daylight must have been very few and when the dangers and difficulties of working within an improvised caisson under such conditions were great, the successful accomplishment of this feat of repairs merits the sincere admiration of all, and is an inspiration to those in the Naval Service ashore who are building and repairing units of the Fleet…”

Relieved of command of the Vulcan in May 1942, he transferred in the same capacity to the USS Savannah. That cruiser participated in the initial American landings on North Africa in November 1942, and subsequently joined the Fourth Fleet and engaged in anti-raider and blockade patrol in the South Atlantic. He was awarded a Letter of Commendation, with authorization to wear the Bronze Star on his Commendation Ribbon, from the Commander in Chief, US Atlantic Fleet. The citation is quoted in part: “You maneuvered the USS Savannah skillfully and boldly in a manner which enabled her accurate and effective gunfire to assist in a great degree toward the neutralization of hostile shore batteries and the destruction of hostile mechanized columns…”

Detached from command of the Savannah in March 1943, he served for a year as Assistant Director of the Base Maintenance Division, Officer of the Chief of Naval Operations, Navy Department, Washington, DC, where his duties included base defense matters of mine, nets, underwater detection, and passive defense. In March 1944 he was ordered to the Pacific for duty as Commander Service Squadron Twelve instituted at that time to clear, reconstruct and improve newly occupied harbors in advanced areas. Service Squadron Twelve was nick-named “The Harbor Stretcher,” and her functions included hydrographic surveys, placing of navigational aids, clearing wrecks by salvage and demolition, removal of coral heads by blasting and deepening of channels, anchorage and dock sites by dredging.

“For exceptionally meritorious conduct… as Commander of a Service Squadron and Task Group in the Marianas, Western Carolina and Volcano Islands, from May 25, 1944, to April 1, 1945….” He was awarded the Legion of Merit with Combat “V,” The citation follows in part: “Although handicapped by an acute shortage of equipment and personnel (he) immediately coordinated and utilized every available facility and efficiently directed the clearance of captured harbors, the salvaging of enemy and American materials and the planning and development of harbors in these areas…”

For further services in command of Service Squadron Twelve, he was awarded the Bronze Star Medal with Combat “V,” with the following citations: “For exceptionally meritorious conduct… from April 1945 to November 1945…” The citation continues: “… Despite the lack of equipment and the shortage of personnel, he continued toward the successful accomplishment of his task by making use of every availability and coordination the facilities of civilian, Army and Navy forces. The installations at Okinawa were nearing completion when the typhoons struck necessitating a discontinuance of operations due to the extensive damage inflicted. Despite the heavy toll of damage incurred by his operational force, (he) successfully deployed his equipment and personnel to Naha Harbor to materially aid the Army forces in their initial operations to effect a transposition of this harbor into a vitally important Army Base…”

In November 1944 he was appointed Commodore (for temporary service), and continued to serve as Commander Service Squadron Twelve until the deactivation of that Squadron on March 2, 1946, when he was ordered to the United States for leave and reassignment. He next reported as Special Assistant to the Commandant, Eleventh Naval District, with headquarters in San Diego, California, and on January 1, 1947, in the rank of Captain, became Chief of Staff and Aide.

He assumed command on February 28, 1947 of Service Squadron Three, which furnished logistics support to the Western Pacific Fleet and the United States activities in China. Relieved of that command, he reported on July 24, 1948, as Deputy United States High Commissioner of the Trust Territory of the Pacific Islands, with additional duties as Deputy Commander, Marianas, and Deputy Governor of Guam. He served twenty-four days as Governor of Guam, and with the inauguration of a civilian Governor, thus became the last of a succession of Naval Officer Governors over a period of fifty years.

In October 1949 he transferred his headquarters and staff to Pearl Harbor, T.H., and on June 1, 1951, was relieved by a civilian deputy. He was detached from duty with the High Commissioner on July 1, 1951, incident to the transfer of responsibility for the administration of the Trust Territory of the Pacific Islands from the Secretary of the Navy to the Secretary of the Interior on that date. On July 5, 1951 he assumed command of the Mare Island-Vallejo Area, US Naval Base, San Francisco. He continued to serve in that capacity until relieved of all active duty, pending his retirement, effective July 1, 1953.