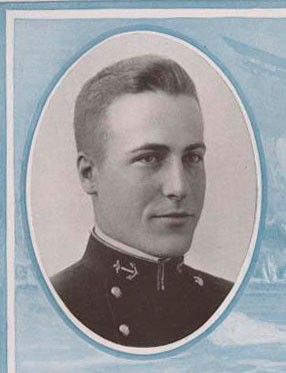 Donald Wood Loomis was born in Milwaukee, Wisconsin, on 15 July 1895, son of Fred W. and Mrs. Jane O. (Goss) Loomis. He attended West Division High School in Milwaukee, and in 1914 entered the US Naval Academy, Annapolis, Maryland, on appointment from his native state. He was graduated with the class of 1918 on 20 June 1917 (course accelerated due to national emergency) and was commissioned Ensign from that date. Through subsequent advancement he attained the rank of Captain to rank from 14 June 1942, and served in the temporary rank of Commodore from 20 October 1944 until 16 September 1945. On 30 June 1946, he was transferred to the Retired List of the US Navy and advanced to the rank of Rear Admiral, on the basis of combat awards.

After graduation from the Naval Academy in June 1917, he was assigned to the USS San Diego, which operated with a cruiser and transport force during World War One. On 19 July 1918, the San Diego struck a mine, supposedly set adrift by a German submarine, and sank near Fire Island off the New York coast. Surviving the sinking of that cruiser, he served from September 1918 until January 1919 as Gunnery Officer of the USS Powhatan, after which he was assigned to the USS Mississippi until June 1921. He was attached briefly to the Naval Air Station, Pensacola, Florida, and in September was ordered to Destroyer Force, Atlantic Fleet and thence to USS Bancroft.

When the Bancroft was decommissioned in June 1922, he joined the USS MacLeish, which operated in Turkish waters, and a year later he was transferred to the USS Overton. Detached on 31 August 1923 upon reaching the United States, he reported on 4 September to the Naval Academy, where he was an instructor in Ordnance and Gunnery until 19 June 1925. On 19 July he joined the USS Huron on the Asiatic Station, and from May 1926 until July 1928 served in the USS Palos operating on Yangzte Patrol. Upon his return to the United States in August 1928 he was assigned to the Naval Training Station, San Diego, California, where he served until July 1930.

Next ordered to sea, he served as Navigator, and later Executive Officer, of the USS Kittery, an auxiliary cargo ship, until April 1933. He then had instruction at the Chemical Warfare School, Edgewood Arsenal, Maryland, and the Naval War College, Newport, Rhode Island, and in June 1934 reported as Officer in Charge of the Recruiting Training School, Naval Training Station, Norfolk, Virginia. When detached a year later he was ordered to the USS Memphis, in which he served as Gunnery Officer from 10 June 1935 until 20 November 1936.

On 27 November 1936, he assumed command of the USS Twiggs, and from April 1936 until June 1938 commanded the USS Monaghan, operating with Destroyers, Scouting Force. In July 1938, he reported to Headquarters, Sixth Naval District, for a tour of duty as War Plans Officer on the Staff of the Commandant. Detached in March 1941, he joined the USS Pensacola on 21 April 1941 and was serving as Executive Officer of that cruiser at the outbreak of World War Two in December of that year.

On 24 October 1942 he assumed command of the USS Harry Lee, and on 25 March 1943, was designated Commander Transport Division SEVEN, Atlantic Fleet. He was awarded the Legion of Merit with Combat 'V,' and the following citation:

"For exceptionally meritorious conduct in the preformance of outstanding service...as Commander of Transport Division SEVEN during the amphibious assault on the Island of Sicily in July 1943. With outstanding professional ability and aggressive leadership, Captain Loomis directed all preparatory training and molded Transport Division SEVEN into an effective combat force. His cool courage under fire and brilliant handling of the forces under his command contributed to the efficient expeditious landing of the embarked troops on enemy beaches and to the ultimate success of this important campaign.

Transferring from the European to the Pacific Area, he served from November 1943 until October 1944 as Commander Transport Division TWENTY, and in the rank of Commodore served throughout the remaining period of hostilities as Commander Transport Squadron ELEVEN, with additional duty as Commander Transport Division THIRTY-ONE. In these commands he participated in attacks at the Gilbert and Marshall Islands, operating at Makin and at Eniwetok, the assault and capture of Anguar Island, and the amphibious operation against Leyte, in the Philippine Islands. He was awarded Gold Stars in lieu of the second, third, fourth and fifth Legions of Merit, and cited, in part, as follows:

Gold Star in lieu of second Legion of Merit: "For exceptionally meritorious conduct...as Commander of a Transport Group engaged in operations for the capture of Makin Atoll during the period October 25, 1943, to November 25, 1943, and Eniwetok Atoll during the period 28 December 1943, to February 25, 1944. His skill in planning and operations, his outstanding leadership, and his personal courage contributed materially to the success of these major operations..."

Gold Star in lieu of third Legion of Merit: "For exceptionally meritorious conduct...as Commander of a Transport Group in the assault and capture of an enemy held island during the period June 15, 1944, to June 24, 1944. Captain Loomis displayed exceptional ability in organizing and training his group, and expertly directed the initial unloading of his ships in this strategic area, and by his tireless efforts, contributed materially to the success of the campaign..."

Gold Star in lieu of Fourth Legion of Merit: "...As Commander of Transport Division TWENTY, in operations aginst enemy Japanese forces during the assault on Angaur Island from September 17 to 28, 1944... (He) skillfully directed the assault waves to the beach without casualties, supervised the expeditious unloading of supplies and was in large measure responsible for the ability of his transport groups to operate safely in heavily mined waters...contributed materially to the success of the landing operations..."

Gold Star in lieu of Fifth Legion of Merit "For exceptionally meritorious conduct...as Commander Transport Division TWENTY, during the amphibious operation against enemy Japanese forces at Leyte, Philippine Islands. An outstanding leader and organizer, Commodore Loomis trained his unit to a high state of efficiency and enabled it to fulfill each detail of a complex landing operation exactly on schedule despite enemy opposition and the failure of his unit to arrive on time to start the operation...and contributed materially to the success of his unit's mission..."

He was also awarded the Bronze Star Medal "For exceptional meritorious achievement as Commander Transport Squadron ELEVEN during the assault and capture of Iwo Jima, Volcano Islands, from February 22 to March 6, 1945..." The citation further states: "Carefully and meticulously planning his attack, Commodore Loomis skillfully directed his transports in landing troops and unloading supplies in the face of intense hostile opposition. Thoroughly experienced in amphibious problems and landing operations, he contributed materially to the success of our forces in the seizure of this vital island..."

Returning to the United States from the Pacific in September 1945, he had temporary duty at the Naval Observatory, Washington, DC, and in November was ordered to the University of North Carolina, Chapel Hill, North Carolina, where he served for almost four years as Professor of Naval Science and Tactics, with additional duty as Commanding Officer of the Navy V-12 Units of the University and of the University's School of Medicine. Ending the 1949 School year he was relieved of all active duty pending his retirement on 30 June 1949.