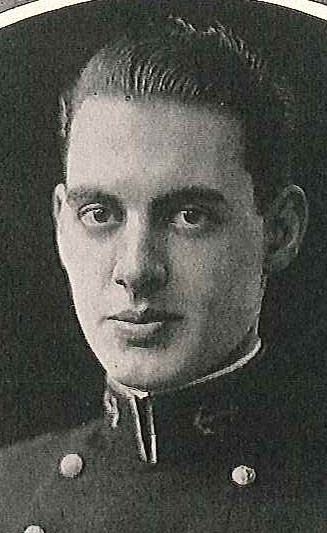 He attended Kiskiminetas School, in Saltsburg, Pennsylvania, and was graduated from the US Naval Academy with the Class of 1923. He completed the postgraduate course in diesel engineering at the Naval Postgraduate School, Annapolis, Maryland, in 1929 and in 1930 received the degree of Master of Science from Pennsylvania State College. The degree of Doctor of Engineering was awarded him by the Johns Hopkins University, Baltimore, Maryland, in 1935.

His first duty after graduation was as a junior officer in the battleship Arkansas. In 1925 he qualified as a submariner following submarine training at New London, Connecticut, and then joined the submarine S-8. From 1930 to 1941 he had duty afloat in the cruiser Chester, commanded the rescue vessel Ortolan, was Commanding Officer of the submarine Cuttlefish, and also commanded the destroyer John D. Ford. This extended sea service was interrupted with two assignments ashore, one between 1933 and 1935 at the Engineering Experiment Station, Annapolis, Maryland, the second during 1938 and 1939, as Assistant Naval Inspector of Machinery at the Electric Boat Company, New London Ship and Engine Works, Groton, Connecticut.

Prior to and after the outbreak of World War II, he served on the staff of the Commander in Chief, Asiatic Fleet, and in this assignment took part in the early war against the Japanese during the campaigns in the Philippines and East Indies. In the winter of 1942 he became Chief of Staff to Commander Allied Naval Forces, East Australia, with similar duty on the staff of Commander Submarines, East Australia. Detached in August 1942, he became Chief of Staff to Commander Amphibious Force, Pacific Fleet (later NINTH Amphibious Force), participating in the seizure and occupation of Attu and Kiska in the Aleutians.

In these responsible duties he was in charge of the planning and execution of assigned missions, working tirelessly handling the various tactical problems with great skill. During the Attu assault, he supervised the successful execution of the plan which enabled our forces to carry out the attacks without loss of any naval ships or personnel. For exceptional conduct while in Australia, and later at sea in the Aleutians Area, he was awarded the Legion of Merit.

Later in 1943 he returned to shore duty, and in the rank of Captain was assigned to the Joint War Plans Committee for the Joint Chiefs of Staff, also serving with distinction as Special Advisor to the Under Secretary of the Navy. During 1946 and 1947 he had duty as Assistant Chief of Naval Operations for Politico Military Affairs, where his services in connection with the coordination of foreign policy and naval policy prior to and subsequent to the end of hostilities were performed in such a manner as to reflect great credit upon himself and the Naval Service. He was awarded a Gold Star in lieu of a Second Legion of Merit for outstanding service in this field.

He had command of the USS Missouri during the period March 1947 until February 1948, when he reported in the highly responsible and distinguished assignment of Naval Aide to the President of the United States, and was so serving when promoted to the rank of Rear Admiral. In February 1953 he became Commander Cruiser Division FOUR, operating in the Atlantic, and in January 1954 he was detached for duty as Director of the Strategic Plans Division, Office of the Chief of Naval Operations, Navy Department. There he had additional duty from 14 November 1955 until June 1956 as Assistant Chief of Naval Operations (Plans and Policy).

From 18 June 1956 to 21 July 1958, in the rank of Vice Admiral, he was in command of the FIRST Fleet. Upon relinquishing that command, he returned to the Navy Department, where he served as Deputy Chief of Naval Operations (Plans and Policy). On 31 March 1959 he reported, in the rank of Admiral, as Commander in Chief of Naval Forces, Eastern Atlantic and Mediterranean and in February 1960 became Commander in Chief, Atlantic and US Atlantic Fleet and Supreme Allied Commander, Atlantic. "For exceptionally meritorious conduct..." in that capacity, he was awarded the Distinguished Service Medal. As the unified commander for the Caribbean, Admiral Dennison was responsible for readying Army, Air Force, Marine, and Navy assault forces for a possible invasion of Cuba. [Cuban Missile Crisis]. On 1 May 1963 he was transferred to the Retired List of the US Navy.

Distinguished Service Medal; Legion of Merit with Gold Star; Army Distinguished Unit Emblem (defense of Philippines in December 1941); Navy Unit Commendation Ribbon (USS Pennsylvania, Aleutians Campaign); Order of Naval Merit (Commander) by Government of Brazil; Order of Crown (Cross of Commander) by Belgium; Honorary Officer in the Order of the British Empire, by Great Britain. He had also been recommended for the following decorations: