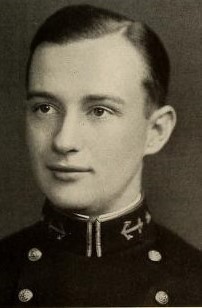 John Elmer Dacey was born in Biloxi, Mississippi, on September 14, 1916, son of Mrs. John A. (Iris Elmer) Dacey and the late Mr. Dacey. He was graduated from Biloxi High School, and on June 25, 1934, entered the US Naval Academy, Annapolis, Maryland on appointment from his native state.  As a Midshipman he was President of the Quarterdeck Society and received the Gardner L. Caskey Memorial Prize awarded the Midshipman graduating at the head of his class.  Graduating with distinction, first in a class of 428 members, he was commissioned Ensign in the US Navy to date from June 2, 1938. Through subsequent advancement, he attained the rank of Rear Admiral to date from March 1, 1965.

After graduation1 from the Naval Academy in June 1938, he was assigned to the USS Nevada, in which he had navigation and engineering duties as a junior officer until June 1939.  He then served for ten months in the Gunnery Department of the USS Somers, and from June 1940 until August 1942 served as Flag Lieutenant on the Staff of Commander Battle Force, US Fleet, attached successively to the flagships Pennsylvania, New Mexico, and California.  He was on board the California in Pearl Harbor, T. H., when the Japanese attacked the Fleet there on December 7, 1941.  In September 1942 he reported to the USS Birmingham, and as Assistant Gunnery Officer of that cruiser participated in the Sicilian invasion and occupation in July 1943.

Detached from the Birmingham in September 1943, he served from October of that year until July 1944 as Flag Secretary to the Deputy Commander in Chief, Pacific and Commander South Pacific Force.  He next served as Navigator and later, Operations Officer, of the USS Oklahoma City, in which he participated in Task Force 38 operations against Japan.  He received a Letter of Commendation with Ribbon, from the Commander in Chief, Pacific Fleet, as follows:  “For excellent service in the line of his profession as Navigator of USS Oklahoma City from 22 December 1944 to 2 September 1945.  His professional skill and devotion to duty were outstanding and contributed materially to the organization and training of the crew and to the high standard of performance of his ship in operations against the enemy…”

From April to June 1946 he was attached to the Bureau of Naval Personnel, Navy Department, Washington DC, concerned with post-war planning.  He returned to Annapolis in July of that year for the Ordnance Engineering course at the Naval Postgraduate School and, continuing instruction at the Massachusetts Institute of Technology, received the degree of Master of Science in Nuclear Physics in February 1949.  During the five months to follow, he had temporary duty in connection with special projects and instruction at the Naval Gun Factory, Washington, DC; Army Chemical Center; Naval Proving Ground, Dahlgren, Virginia; Bureau of Ordnance, Navy Department; Naval Ordnance Test Station, Inyokern, California; and the Armed Forces Special Weapons Project, Sandia Base, New Mexico.

In August 1949 he was assigned to the Los Alamos (New Mexico) Scientific Laboratory for duty concerning nuclear weapons development, and from July 1950 until June 1951 had plans and operations duty with Joint Task Force 3, Los Alamos, and on the Staff of Scientific Task Group 3.1, during Greenhouse atomic tests at Eniwetok.  A tour of duty in the Office of the Chief of Naval Operations, Navy Department, as Assistant Head of the Weapons Branch, Atomic Energy Division, preceded sea duty in command of the USS Dyess (DDR880) from November 1952 until November 1954.  A month later he returned to the Office of the Chief of Naval Operations to serve in the Undersea Warfare Division.

He was a student at the National War College, Washington, in the 1957-1958 year and in June 1958 assumed command of Destroyer Division 212.  After a year at sea he had a tour of duty in the Bureau of Ordnance (later Bureau of Naval Weapons) as Research and Engineering Officer and on September 25, 1962 became Commander Destroyer Development Group TWO based in Newport, Rhode Island.  On September 5, 1963 he was detached to report as Prospective Commanding Officer, USS Chicago (CG11), being converted at the San Francisco Naval Shipyard.  He assumed command of that guided missile cruiser upon her commissioning May 2, 1964.  On May 17, 1965 he reported as Senior Navy Member, Military Studies and Liaison Division, Weapons Systems Evaluation Group, Office of the Director of Defense Research and Engineering, Washington, DC, and in January 1967 became Commander Cruiser Destroyer Flotilla TWELVE, with additional duty during January and February that year as Commander Cruiser Destroyer Flotilla FOUR.

“For exceptionally meritorious service from April 1968 through June 1970 while serving in the Office of the Chief of Naval Operations…” he was awarded the Legion of Merit.  The citation further states in part:

“In response to an urgent requirement for the establishment of a program for fleet defense against anti-ship missiles, Rear Admiral Dacey quickly and effectively initiated actions to provide anti-ship missile protection for USS New Jersey and other major combatant ships operating in the Gulf of Tonkin in the support of our forces in Vietnam.  As a result of his leadership, professional knowledge and remarkable administrative ability, the U. S. SEVENTH Fleet was provided with equipment which permitted ships to operate close to hostile coastlines with confidence that missiles launched against them from coastal sites or water craft could be defeated…”