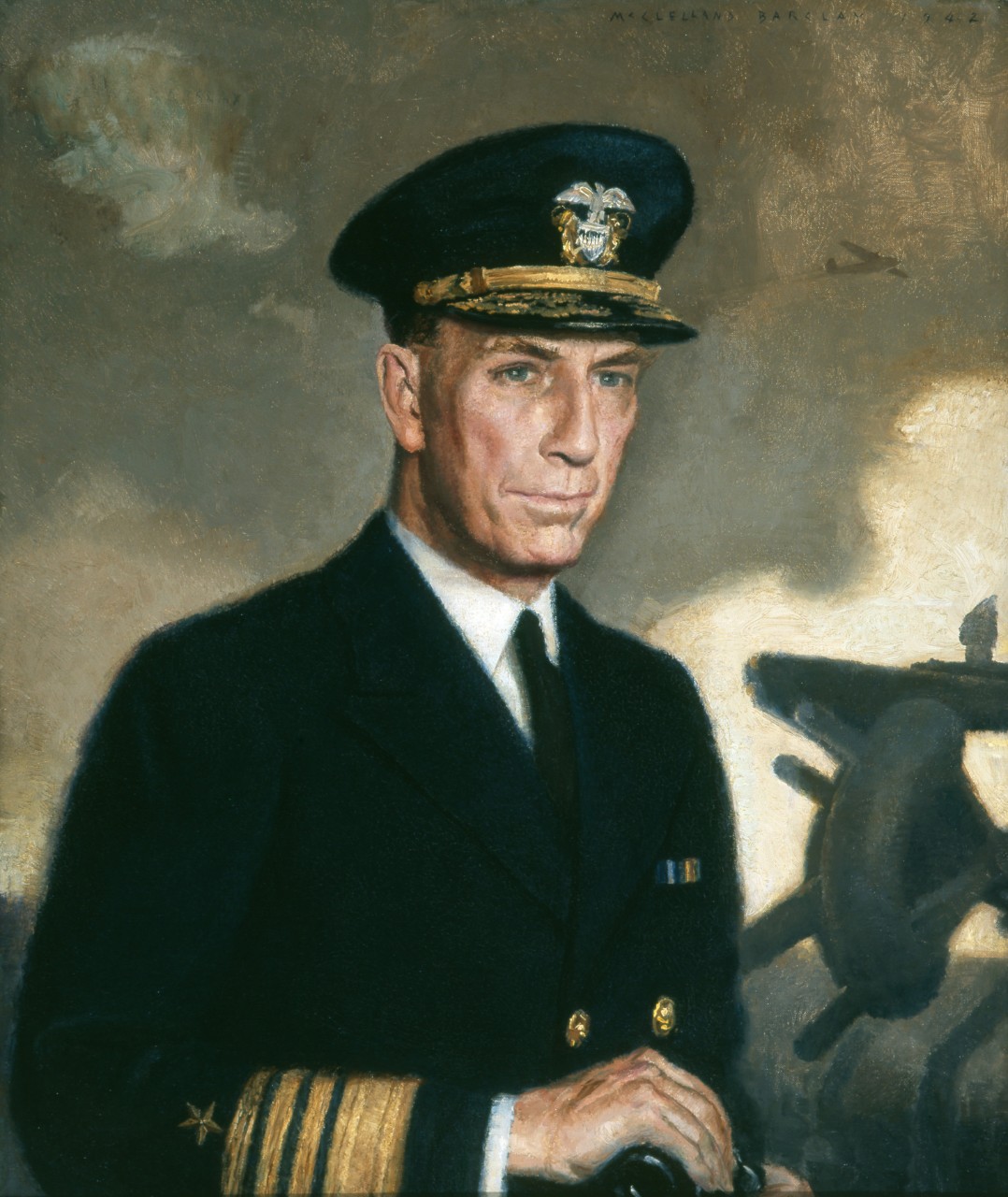 Royal Eason Ingersoll, son of the late Rear Admiral Royal Rodney Ingersoll, USN, and Mrs. (Cynthia Eason) Ingersoll, was born in Washington, DC, on 20 June 1883. By the time he entered the US Naval Academy in 1901 by appointment from Indiana, he had three times previously resided there and had taken a First Class cruise with the Class of 1900 on the USS Annapolis, with his father in command. He is second in a line of three generations of distinguished naval officers: his father, USNA Class of 1868, served in the Civil War, Spanish American War and World War One, and his son, Lieutenant Royal Rodney Ingersoll, II, Class of 1934, was killed in action on 4 June 1942, in the Battle of Midway, on board the USS Hornet.

He attended primary schools in Annapolis, received further training in public schools in LaPorte, Indiana, and Wilmer's Preparatory School. He won a competitive appointment from the Thirteenth District of Indiana and entered the Naval Academy in 1901 as a Naval Cadet (title changed to Midshipman in 1902). Graduated with distinction in January 1905, he was presented the sword and knot awarded by the Class of 1871 for proficiency in ordnance and gunnery.

Upon detachment from the Naval Academy in 1905, he reported as a Passed Midshipman to the USS Missouri. In August of that year he was one of the young officers assigned special temporary duty to attend the Russian-Japanese Peace Conference, held at the Navy Yard, Portsmouth, New Hampshire. When detached from the Missouri in May 1906, he was assigned briefly to the USS Marietta, and later the USS Hancock , then assisted in the fitting out the USS Connecticut at the Navy Yard, New York. He served on board that battleship from her commissioning on 29 September 1906, until October 1907, during which period she became the Flagship of the Commander in Chief, US Atlantic Fleet on 16 April 1907.

He had a period of instruction in the Bureau of Ordnance, Navy Department, Washington DC, and rejoined the USS Connecticut at San Francisco, California in June 1908 to continue the World Cruise with the Battle Fleet. Leaving supplies and stores at Messina, which had been leveled by earthquake, the Fleet called at Naples to arrange for turning over the supply ship Yankton to the Italian Government. He was detached from the Connecticut in May 1911 to attend a Conference of Officers at the Naval War College, Newport, Rhode Island, from 10 June to 30 August, that year.

Duty as an instructor of Seamanship and International Law, and later of English, 1911 to 1933, at the Naval Academy, proceeded his assignment to Asiatic Station, where he joined the USS Saratoga, Flagship of the Asiatic Fleet. He served briefly as her First Lieutenant, then became Aide and Flag Lieutenant on the Staff of the Commander in Chief. He returned to the United States, and on 1 June 1916, reported as Assistant for Communications, and Communication Officer, in the Office of the Chief of Naval Operations, Navy Department. Concerning that assignment, he subsequently wrote: 'The work in this office began to pick up as the tension in the diplomatic relations with Germany increased, and overwhelmed us on 2 February 1917, when diplomatic relations with that country were broken...' For organizing the greatly expanded Naval Communications Office during World War I, he was awarded the Navy Cross and cited 'For distinguished service in the line of his profession in organizing, developing and administering the Communication Office of the Navy Department.' 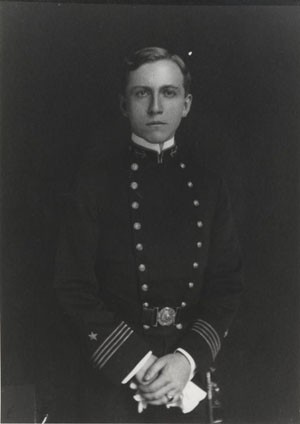 After the Armistice in November 1918, he was ordered to join Admiral William S. Benson, USN, then Chief of Naval Operations, who was to be Naval Advisor to the American Commission to Negotiate Peace, in Paris, France. His assignment concerned the establishment of a communication office for that commission. In February 1919 he returned home in the USS George Washington with the Presidential party, handling messages for President Woodrow Wilson on the voyage across the Atlantic.

In March 1919, he again joined the USS Connecticut, serving this time as her Executive Officer until September 1920, then transferred to the USS Arizona. In June 1921 he reported to the Navy Department for a tour of duty in the Office of Naval Intelligence, and on 26 March 1924, assumed command of the USS Nokomis. Under his command that gunboat was fitted out as a survey ship and cruised in the Cuban-Haitain area, making new charts of the north coast of Cuba from Matanza to Sagua la Grande, and extending to Nuevitas. Determination of the shore line was made chiefly by airplane photography, the first extensive use of planes in hydrographic surveying.

Completing the Senior Course at the Naval War College, Newport, Rhode Island, in June 1927, he reported for duty as a member of the Staff. In June 1928 he reported for duty as Assistant Chief of Staff to Commander Battle Fleet, in the USS California, and continued similar duty on the Staff when Admiral Pratt became Commander in Chief, US Fleet, his flag in the USS Texas. In August 1940 he was assigned to the Division of Fleet Training, Office of the Chief of Naval Operations, Navy Department, where he served until 1933. He then reported as Commanding Officer of the USS Augusta, and in November 1933 was transferred to the Navy Yard, Mare Island, California, to fit out the USS San Francisco. He commanded that cruiser from her commissioning, 10 February 1934, until June 1935.

Three years' duty in the Office of the Chief of Naval Operations, as Director of the War Plans Division, included his assignment in June 1936 as Technical Assistant to the American Delegation at the London Naval Conference in 1935-1936. He again went to London in December 1937, concerned with requirements growing out of the London Treaty limiting naval armament.

On 16 July 1938, he took command of Cruiser Division Six of the Scouting Force, his flag in the cruiser Minneapolis. Two years later he returned to the Office of the Chief of Naval Operations as Assistant to the Chief, and on 1 January 1942, with the rank of Vice Admiral, he was designated Commander in Chief, US Atlantic Fleet, hoisting his flag in the Augusta. He was advanced to the rank of Admiral the following 1 July. Having organized the movements of the thousands of ships across the Atlantic in order to have men and supplies on hand at the precise hour for the North African landings in November 1942, to him fell the responsibility of planning the composition of the naval escort forces which ensured the troop convoys' safe arrival, and the old Navy tradition of 'having never lost a troop ship' remained true.

Following the African invasion, the Atlantic Fleet was employed in running troop convoys, transporting stores, munitions and fuel of every character to the United Kingdom and the Mediterranean. As a side issue, it ran the convoys on the coast of Brazil, and continuously waged the anti-submarine war which had been a matter of primary concern since the outbreak of hostilities. Admiral Ingersoll is generally credited with whipping the U-boat menace and with solving the vast Atlantic logistics problem. In addition he had the responsibility of defense of the Western Hemisphere by our Naval forces, and of changes in the disposition of air and surface forces stationed at various points in North and South America. For his services in this tremendously important command, he was awarded the Distinguished Service Medal and cited as a '... forceful and resolute leader under the critical conditions existing throughout a period of approximately three years...against a determined and ruthless enemy intent on world domination...' 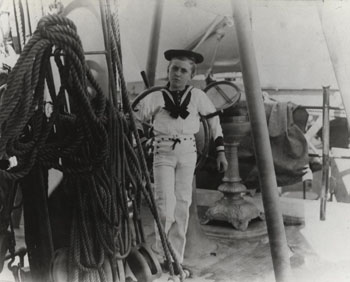 In November 1944 he was detached from command of the Atlantic Fleet and became Commander Western Sea Frontier, with Headquarters at San Francisco. In addition to commanding the naval forces engaged in protecting shipping in coastal waters, he managed the flow of supplies to the Pacific Fleet through West Coast ports, and in carrying out this assignment had the status of a Deputy Commander in Chief, US Fleet, and Deputy Chief of Naval Operations. After the reorganization of the Navy in October 1945, he continued to serve as Commander Western Sea Frontier until 10 April 1946, when he was relieved of all active duty pending his retirement on 1 August 1946.

In addition to the Navy Cross and the Distinguished Service Medal, Admiral Ingersoll has the Victory Medal (World War I); the American Defense Service Medal, Fleet Clasp; American Campaign Medal; European-African-Middle Eastern Campaign Medal; and the World War II Victory Medal. He also was awarded the Chevalier of the Legion of Honor by the Government of France, and the Order of Naval Merit (Grand Cross) by the Government of Brazil.

He was married in 1910 to Louis Van Harlington of Atlanta, Georgia, and had a daughter. LaPorte, Indiana is his ancestral home, his maternal grandfather, Seth Eason, being a pioneer of that city. Admiral Ingersoll was a member of the Army-Navy Club of Washington, DC, the New York Yacht Club and others. He died 20 May 1976 in Bethesda, Maryland at the age of 92.