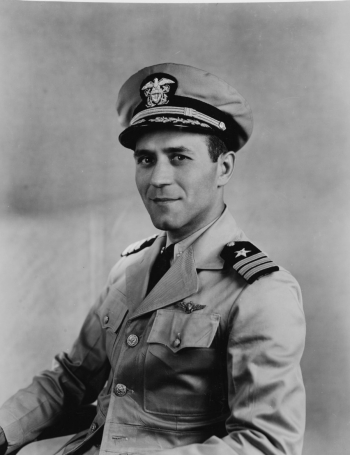 Joseph Thomas Yavorsky was born Youngstown, Ohio, on 12 August 1913, son of Joseph J. and Adolpha (Redesky) Yavorsky. He attended South High School in Youngstown and Severn Preparatory School Severna Park, Maryland, before his appointment to the US Naval Academy, Annapolis, Maryland, in 1933. He was graduated and commissioned Ensign on 3 June 1937, and through subsequent promotions attained the rank of Commander, to date from 20 July 1945.

Upon graduation from the Naval Academy in June 1937, he was assigned to USS New Orleans, which he served as junior officer in Anti-Aircraft and Gunnery until December 1938. From 27 December 1938 until 1 March 1940, he had duty as Communications Officer of USS Downes, and during the year following he completed flight instruction at the Naval Air Station, Pensacola, Florida, being designated Naval Aviator in January of 1941. During the period February to August 1941 he was attached to USS New Orleans, serving as a pilot of Cruiser Scouting Squadron 6, aviation unit of that cruiser.

In September 1941 he reported to USS Chicago as Senior Naval Aviator and was on duty aboard that cruiser when the United States entered World War II in December of that year. Following the loss of the Chicago he was ordered as Executive Officer of Composite Squadron 33, operating in the Pacific Area. Ordered to the Atlantic Theater of Operations, he served from August 1943 to November 1944 as Commanding Officer of Composite Squadron 42, operating from the carrier escort vessels Mission Bay, Guadalcanal, Groton, and Bogue. He is entitled to the Ribbon for a facsimile of the Presidential Unit Citation awarded USS Bogue. He also received a Commendation Ribbon for service aboard the Chicago. He received a Letter of Commendation with ribbon, from the Commander in Chief, US Atlantic Fleet. The citations follow in part:

Presidential Unit Citation to USS Bogue: “For outstanding performance in combat against enemy submarines in the Atlantic Area from April 20, 1943 to July 3, 1944. Carrying out powerful and sustained offensive action during a period of heavy German undersea concentrations threatening our uninterrupted flow of supplies to the European theater of operations, the USS BOGUE, her embarked planes and her escorts tracked the enemy packs relentlessly and, by unwavering vigilance, persistent aggressiveness and perfect cooperation of all units involved, sank a notable number of hostile U-boats…”

Letter of Commendation: “For outstandingly meritorious performance of duty as pilot of U. S. Navy torpedo bombers during a period of intensive aerial anti-submarine operations. Operating under generally unfavorable weather conditions and without previous night carrier training, Lieutenant Commander Joseph T. Yavorsky with companion pilots of his squadron, successfully pioneered night escort carrier aircraft operations in the Atlantic…conclusively demonstrated the feasibility and effectiveness of night operations in anti-submarines warfare. The determination of all pilots of the embarked squadron to inflict maximum damage on the enemy resulted in his self-qualification in extremely dangerous night carrier flying while on an operational cruise…”

Returning to shore in November 1944, he served until December 1946 as the Superintendent of Aviation Training at the Naval Air Station, Miami, Florida. In 1946 he was ordered as ComObsWingLant with additional duty on the staff of ComBatCruLant. He was ordered in 1948 to the Staff of ComCarDiv 16 and Commander, Task Force 81 as Operations Officer serving aboard Mindoro and Sicily in this capacity. From 1950 until August 1952 he served as Officer in Charge of the Naval Air Facility at the Naval Proving Ground, Dahlgren, Virginia.

A student at the Naval War College, Newport, Rhode Island, during the school year 1952-1953, he reported in July 1953 for duty with Commander, Fleet Air Wings, Atlantic, headquarters at Norfolk, Virginia. He was detached in August 1954, and after instruction at the Fleet Sonar School, Key West, Florida, and the Navy Damage Control Center, Philadelphia, Pennsylvania, he assumed duty as Executive Officer of USS Antietam (CVS 36)