John Edward Gingrich was born in Dodge City, Kansas, on 23 February 1897, son of Edward G. and Bertha (Allen) Gingrich. He attended the University of Kansas in Lawrence, before his appointment to the US Naval Academy, Annapolis, Maryland, from his native state in 1916. He was graduated and commissioned Ensign on 7 June 1919, with the Class of 1920, and through subsequent promotions attained the rank of Vice Admiral, to date from 30 July 1953. On 1 October 1954 he was transferred to the Retired List of the US Navy, and was advanced to the rank of Admiral on the basis of combat awards.

After graduation from the Naval Academy in June 1919, he was assigned to the USS Pennsylvania, and from January 1920 until July 1921 served as Assistant Communications Officer on the Staff of Commander in Chief, Atlantic Fleet, still attached to the Pennsylvania, flagship. In August 1921 he was transferred to duty in the USS Maryland, in which he served until June 1925. He then returned to the Naval Academy where he was an instructor in the Department of Navigation for two years.

In May of 1927 he joined the USS Rochester, and served as Gunnery Officer of that cruiser until July 1930. For two years thereafter he had duty in connection with the Naval Reserve Officers' Training Corps Unit, Northwestern University, Evanston, Illinois. He commanded the USS Algorma from June 1932 until April 1934 when he was transfered to the USS Indianapolis to serve until June 1935. After a tour of duty in the Hydrographic Office, Navy Department, Washington, DC, he returned to sea to serve as Aide and Flag Secretary on the Staff of Commander Battleship Division 3, Battle Force, USS Idaho flagship; and a third year as Navigator of the USS New Mexico.

After fitting out the USS Pittsburgh, he commanded that cruiser from her commissioning, 10 October 1944 until 3 September 1945. He was in command when the Pittsburgh, during operations against the Japanese in March 1945, protected and towed a seriously damaged aircraft carrier to safety, and when on 5 June 1945 she lost her bow in a Pacific Typhoon. The bow, floating stem up on the ocean, was later caught and towed to Guam, arriving a week after the Pittsburgh, which had received temporary repairs at a Pacific base before proceeding to the Navy Yard, Puget Sound, Washington for permanent repairs.

For outstanding services as Commanding Officer of the Pittsburgh, he was awarded the Silver Star Medal, the Legion of Merit, and a Gold Star in lieu of the second Legion of Merit. The citations follow in part:

Silver Star Medal: "For conspicuous gallantry and intrepidity as Commanding Officer of the USS Pittsburgh, in action against enemy Japanese forces off the Southern Coast of Honshu, Japan, on March 19, 1945. When a seriously damaged aircraft carrier lay dead in the water due to enemy action and was still being subjected to hostile air attacks, (he) skillfully passed a howser to the stricken vessel and towed her until she regained power to maintain cruising speed, at the same time directing his ship's batteries in providing protective cover..."

Legion of Merit: "For exceptionally meritorious conduct...as Commanding Officer of USS Pittsburgh during action against enemy Japanese forces in the Kyushu-Okinawa Area, from March 17, 1945, to the close of Fast Carrier Task Force Operations in this area...His alert and cool command of every situation which confronted him, and his precise execution of important assignments contributed immeasurably to the frustration of the enemy's desperate attempts to disrupt our Fleet operations supporting the assault on Okinawa..."

Gold Star in lieu of Second Legion of Merit: "For...outstanding service as Commanding Officer of USS Pittsburgh during sustained operations against the enemy from 23 March to 25 May 1945. During this period his inspiring leadership and professional skill materially contributed to the success of our forces in the occupation of Okinawa and islands of the Nansei Shoto Group, the raids on Tokyo, Southern Japan, and enemy fleet units in the Inland Sea..."

Relieved of command of the Pittsburgh in September 1945, he served briefly as Chief of Staff and Aide to Commander, Second Carrier Task Force, Pacific Fleet, and on 24 October, reported to the Bureau of Naval Personnel, Navy Department, Washington, DC. There he was in charge of setting up the post-war program for US Naval Personnel. On 7 December 1945 he was designated Assistant Chief of Naval Personnel (Reserves), and in August 1946 was transferred to duty as Assistant Chief of Naval Operations (Reserves) and Director of Reserve, Naval Operations.

On 18 August 1947 he was ordered to duty in the Office of the Secretary of the Navy for service with the Atomic Energy Commission, Washington, DC. In July 1949 he joined the staff of the Commander in Chief, US Pacific Fleet, as Chief of Staff and Aide, and in October 1951 was designated Commander Training Command, US Pacific Fleet. On 31 May 1952 he became Commander United Nations Blockading and Escort Force, Pacific, a force of nine United Nations Naval forces which maintained an air tight blockade of Korea for more than two years. "For exceptionally meritorious service...(in that capacity) during operations against enemy aggressor forces in Korea from 31 May 1952 to 12 February 1953..."he was awarded the Distinguished Service Medal. The citation continues:

"...Rear Admiral Gingrich skillfully organized and coordinated the naval units from eleven different nations into a highly effective fighting team which completely denied the enemy the use of his sea lanes, virtually eliminated the threat of mines for gunfire ships involved in inshore operations and inflicted extensive destruction upon hostile supply and transportation facilities. Under his competent direction, the recently established Republic of Korea Navy developed into a strong and efficient fighting organization. Ships of Great Britain, Canada, Australia, New Zealand, Netherlands, Thailand, and Colombia also operated successfully under his direction. In order to be fully informed in his activities, he frequently visited the islands occupied by friendly forces, cruised in various vessels of his command and was under heavy enemy fire on numerous occasions. By his marked professional skill, sound judgment, and unswerving devotion to the fulfillment of vital operations, (he) contributed materially to the success of the naval mission in Korea..."

Admiral Gingrich died at home in New York 26 May 1960 and is buried in Arlington National cemetery. 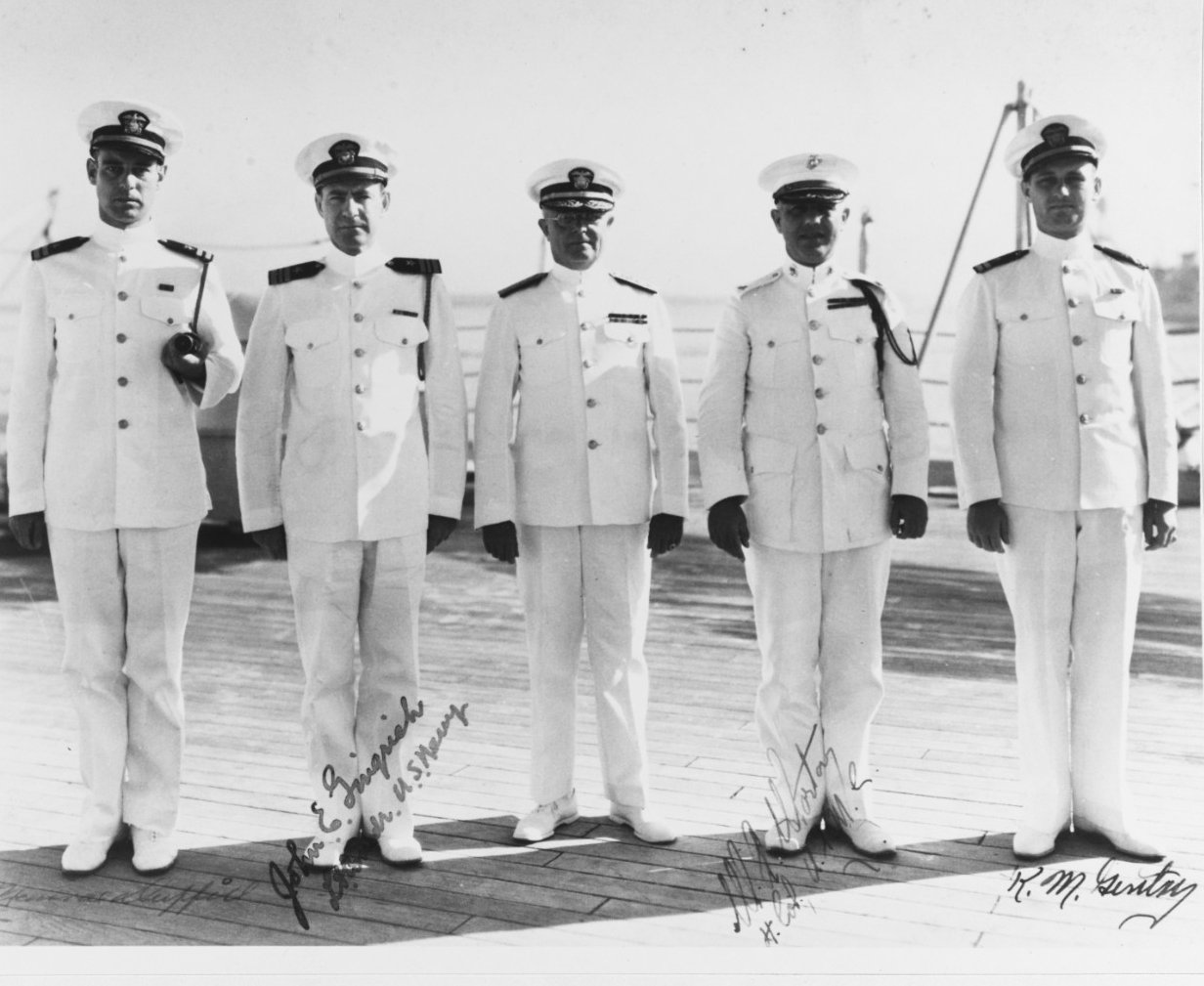