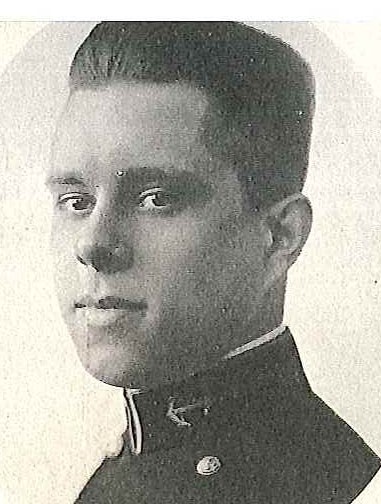 Captain Dell was born on November 26, 1899, in Baltimore, Maryland, son of Thomas N. Dell, Sr., and Mrs. Florence (Hampson) Dell. He attended public schools of Baltimore and Baltimore College there before entering the US Naval Academy at Annapolis, Maryland on August 1, 1917. While a Midshipman he participated in athletics as a member of the soccer and track teams, winning the Track “N” and captaining the Soccer Team his First Class year. Graduated and commissioned Ensign on June 3, 1921, he subsequently attained the rank of Captain, to date from June 20, 1942.

Upon graduation from the Naval Academy, Captain Dell was assigned to the Academy Station Ship, USS Regina Mercedes and after a few months was transferred to USS Florida, flagship of Commander Control Force, Atlantic Fleet. In the summer of 1922 he joined the Asiatic Fleet, and for three years thereafter served in USS Paul Jones, and USS Pecos, units of that Fleet. He had temporary duty in the Receiving Ship at San Francisco, California in July 1925, and the next month reported to USS J. F. Burnes, operating with Division THIRTY-ONE, Destroyer Squadrons, Battle Fleet. He was transferred the next year to USS MacDonough and served aboard that destroyer, Flagship of Division THIRTY-SIX, Destroyer Squadron TWELVE, Battle Fleet until June 1928.

Captain Dell returned to the Naval Academy for a two year tour of duty as an instructor in the Department of Engineering and Aeronautics, and in the summer of 1930 joined USS Waters, operating with Division TWELVE, Destroyer Squadrons, Battle Fleet. Continuing sea duty he transferred to the battleship Nevada for a year’s service before he again returned to the Naval Academy in June 1933 this time for three years as instructor in the Department of Marine Engineering.

In June 1936, Captain Dell was assigned sea duty as Executive Officer of USS Reuben James and served in that capacity while that destroyer operated with Destroyers, Battle Force until he was detached in July to command USS Preble of Mine Division ONE, Battle Force, operating from Pearl Harbor, Territory of Hawaii. Relieved in August 1939, he had a third tour of duty at the Naval Academy as instructor in the Department of Marine Engineering.

Following duty from February to May 1941, in connection with fitting out USS Washington (BB 56), Captain Dell served from her commissioning until July 1942 as Damage Control Officer and First Lieutenant. During several months of that period, after the United States entered World War II, the Washington operated with Task Force NINETY-NINE in the Atlantic. He subsequently fitted out USS Monongahela and for thirteen months command that auxiliary oiler while she operated with Service Force Pacific.

Captain Dell served from November 1943 until May 1945 as Joint Overseas Shipping Control Officer on the staff of Commander, Service Force, Pacific Fleet. For exceptionally meritorious service in that capacity he was awarded the Legion of Merit with citation as follows:

“For exceptionally meritorious conduct in the performance of outstanding services to the Government of the United States as Joint Overseas Shipping Control Officer on the Staff of Commander Service Force, United States Pacific Fleet, from November 1943, to May 1945. Exercising outstanding initiative and administrative ability, Captain Dell planned the initial establishment of the Joint Overseas Shipping Office and, during a period when coordination of all the armed forces was essential, efficiently directed this acticity in controlling the troop and cargo schedules of vessels operating in the Pacific Ocean Area. By his leadership and tireless devotion to duty throughout, he contributed materially to the over-all Pacific war effort and upheld the highest traditions of the United States Naval Service.”

In June 1945 he reported for duty as District Intelligence Office Fourth Naval District, with Headquarters at Philadelphia, Pennsylvania. He remained on duty there until March 1949 when he was ordered to Pearl Harbor, TH, where he is now serving a Port Director.